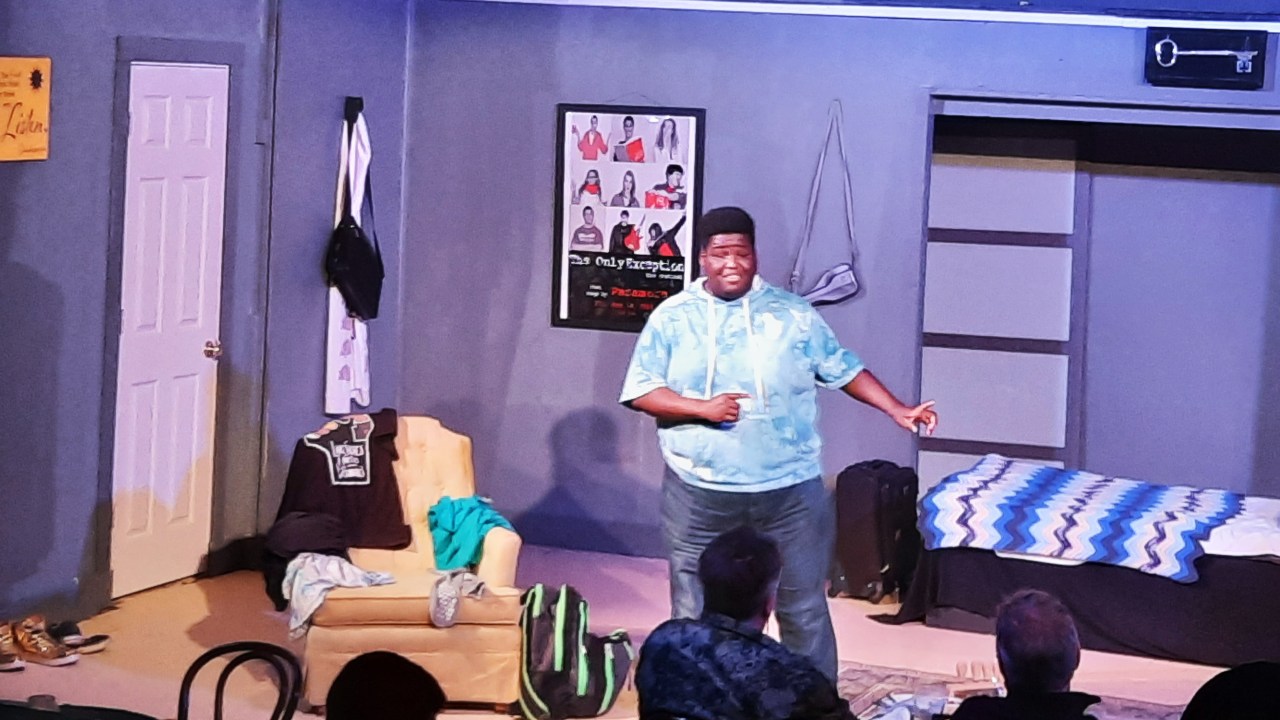 An expression of self.

The medium can be anything.

It can be “The Untitled Kevin Sievert Project.”

The stage of The Forst Inn serves as Kevin Sievert’s room.

He holds forth – mostly singing and telling stories – live, with an in-person audience.

Kevin Sievert has a way of holding attention.

His voice is an embracing tenor – strong, clear, pliable, rhythmic and with a certain sweetness/tang. Pick a berry that you savor; it’s that berry just-right tasty.

His body language speaks of presence.

The rest? “His-story” is the way Michael Sheeks, director of The Forst Inn Arts Collective, sums up what happens. Looking for a presentation coming out of the COVID-19 pandemic last March, Michael Sheeks thought of Kevin Sievert from knowing what he’s done on the same stage.

“His-story” flows like a river filled with bubbly stretches, plenty of sharp rocks and curves that lead to discoveries – always with a feeling of the possibility of drowning.

The basics: Kevin Sievert was brought up Catholic, took to performing as a child, won some honors and, at age 27, feels he is on the cusp of something professionally so his “Untitled” life can earn a title.

The project is entertaining. Kevin Sievert has found 19 songs to flesh out his story, a remarkable number that look into his soul and being and reveal parts of him.

“Random Black Boy” arrives around the time he speaks of being adopted along with his twin sister, brought from Janesville to “the white plains of Manitowoc.”

“One” is his lonely number, for being viewed as out-of-place “weird.” He says along the way, “I’m the chubby black kid with a passion for theater.”

“A Little Bit” illustrates a conversation with his adoptive mother, always spoken of as kind, knowing, supportive and loving.

“Without You” is a reflection on a broken relationship.

Along the way, Kevin Sievert has another force on stage – David Bowman – not only playing keyboard in songs but portraying characters in “his-story,” sometimes as devil’s advocate.

My guess is Kevin Sievert – even as revealing as his show is – feels comfortable exposing his soul in a familiar place that’s mostly off the radar at a crossroads surrounded by farmland. The show of his creation is something one might find in Chicago, say. It is that well-formed, keenly performed and engaging.

Kevin Sievert definitely has a story. The way he tells it? Art is art.

The above is almost entirely a repeat of my review of the 2021 “The Kevin Sievert Project” – repeated because the show in its 2022 form is virtually intact.

I wanted to see it again because it, No. 1, is unlike any other show around because it is so personal and self-revelatory and song-splashed, and No. 2, to find out whether Kevin Sievert has any update.

In the show, he tells the audience, “This is not quite a finished product” and “I’m still on my way.”

Those are the same things he said in 2021. The show is not updated, even though I kind of got a picture of what Kevin Sievert has been up to in the past year:

+ I purchased a Coca-Cola from him as bartender at The Forst Inn for another show and saw other involvement at other shows there.

+ Noticed that he was sound designer for The Masquers, Inc. recent production of “Boeing, Boeing” at Capitol Civic Centre in Manitowoc.

+ Heard that he held the key role of Seymour in “Little Shop of Horrors” with the professional Skylight Music Theatre of Milwaukee.

+ Heard that he has a role in “Spring Awakening” in Chicago (Otto, in the professional Porchlight Music Theatre production set for April 23-May 9 at The Ruth Page Center for the Arts downtown).

+ Was told he has the role of Bottom in The Forst Inn Arts Collective’s production of “A Midsummer Night’s Dream” July 8-31.

+ Saw that he will direct The Forst Inn Arts Collective’s production of the musical “Carrie” Oct. 13-30.

“The Untitled Kevin Sievert Project” may be the story of a wannabe, but it appears there’s more “be” than “wanna” coming up.

It’s a fascinating show, full of insights about what building a performance career is like for an adopted Black kid growing up gay in Manitowoc. And performed full on with heart.

Songs
Act I
“Living in Another World” by Neon Trees
“Random Black Boy” by Kooman + Diamond
“California Dreamin’” by The Mamas and The Papas
“One” by Three Dog Night
“Dancing in the Dark” by Scary Pockets, made famous by Bruce Springsteen
“Make Me Feel” by Janelle Monae
“I’m Calm” from “A Funny Thing Happened on the Way to the Forum”
“Bring Him Home” from “Les Miserables”
“Wait ’Till You See What’s Next” by Jason Robert Brown
Act II
“Poor, Unsuccessful and Fat” from “A New Brain”
“Belief” by Alexander Sage Oyen
“Stay” from “Amélie”
“Bennie and the Jets” by Elton John
“Waving Through a Window” from “Dear Evan Hansen”
“Poetry by Dead Men” by Sara Bareilles
“A Little Bit” by Drew Gasparini
“Without You” from “Rent”
“Genius” by Duncan Sheik
“Cry Today, Smile Tomorrow” by Anthony Ramos

THE VENUE: The historic Forst Inn is located at the corner of Kewaunee County roads B and BB. The building dates to 1868, with assorted lives over the years. For a notable period – 1990 into the 2000s – the place was popular for productions of Little Sandwich Theatre, which Manitowoc attorney Ron Kaminski (deceased 2018) nurtured with a caring hand as artistic director/performer/do-all for a wide array of productions. The present venture is of that spirit. The stage is wide and narrow. The space is intimate. Seating is at small tables on two levels in a slight arc in front of the slightly raised stage. To the audience’s rear is the stage director’s space, with light and sound controls. The space is essentially a black box in theater style in the front – with additions: two chandeliers above the audience, a street lamp the seating area and the ambiance of 1920s style elements to the rear in a service area.  A seating/serving area is in the middle of the building, along with a ticketing counter. The bar area out front includes the bar, table seating, more 1920s ambiance and a passage to an art gallery (rotating artists) that is now part of the offerings of The Forst Inn Arts Collective overseen by Michael Sheeks, who also teaches at the University of Wisconsin-Green Bay campus in Manitowoc.