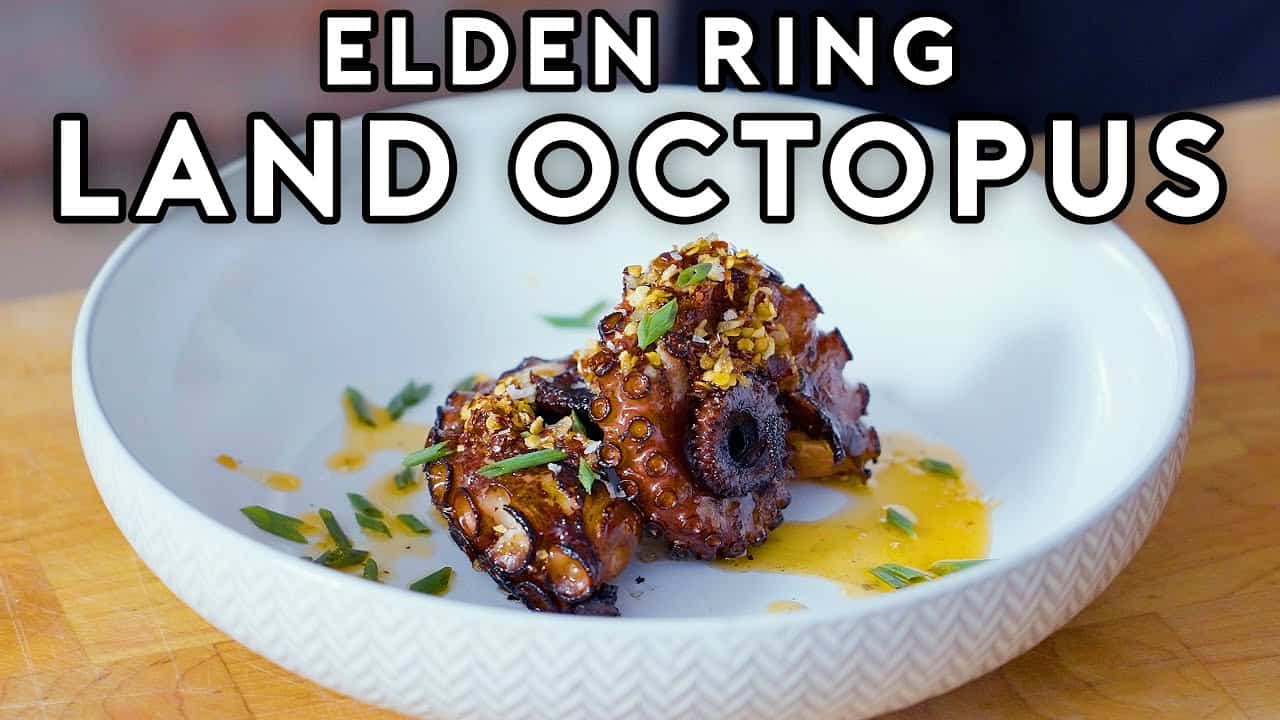 
More than a few people might see ‘octopus’ and make a sour face since the idea of eating anything with tentacles might be less than ideal. But for those that like trying something new or don’t mind a bite or two of octopus, this meal sounds kind of good considering that Binging with Babish is the kind of show that isn’t really known for making dishes look less than scrumptious. In this episode, we get to see Alvin Zhou contribute to the meal both as a cook and as a video game expert as Elden Ring, one of the more popular games at the moment, took precedent as land octopus and Crimson Tears were the order of the day. One thing about octopus is that if it’s undercooked it’s disgusting, and if it’s overcooked then one might as well try chewing on a tire. But octopus cooked just right is actually quite good, not to mention that it’s considered to be a rather common meal in some parts of the world. There’s no doubt that the land octopus in Elden Ring would be a completely different species than what many people in this world are used to, but all the same, it’s always interesting to tune in to see what’s going to happen.

There are bound to be plenty of questions about this meal, such as whether there’s a difference between grilling boiling, frying, or doing something else to octopus when it comes to the taste, the cooking time, and so on so forth. Some dishes are a little temperamental, as cooking times, methods, and handling and treatment can make a huge difference in how they end up tasting. For octopus, it feels as though grilling and frying are great, but boiling might be a definite must at one point. Octopus is kind of a touchy food to be realistic, and cooking it right takes a skilled hand.

To some folks, it still looks and sounds horrendous since octopus isn’t a normal part of their everyday diet, nor is it something they could conceive of eating. In video games, food often takes on the appearance of something that’s comfortable and pleasing, or becomes something that’s exotic and will appeal to some people but not everyone. Octopus is one of those foods that some people think of positively and others think of as better left in the ocean where they can swim away. A land octopus is kind of a funny thought since it kind of flies in the face of everything a lot of people know, and in the game they look particularly nasty, not to mention downright mean. The creatures are the kind of obstacle that is aggressive even when not being attacked and are tough enough that if they were in the real world it feels safe to say that the government might pay people to keep their numbers down. But in the game, well, things happen. Octopi get big enough in this world to make it clear that they don’t need to get any bigger, and they definitely don’t need to make their way on land since it’s tough enough to deal with slippery, ink-spewing buggers in the water.

But as it goes with video games, a lot of creatures that might be based on one real-world creature or another tend to be bigger, meaner, and a lot more insane in appearance. A single tentacle in the Elden Ring monsters could probably feed a family or a small village. But in the real world, Babish makes do with what can be procured. The two chefs make it work while going through what’s kind of an awkward video, which appears a lot different from many other Babish videos, and they make it a bit fun too. The Crimson Tears tea is kind of interesting as they use crushed hibiscus leaves with a couple of other ingredients in it to alter the taste and the appearance. The appearance of the tea gives rise to the name, as it is quite red, and it sounds like it’s kind of good. All in all this meal sounds like it turned out just the way it needed, but trying it at home might be a bit different.

The act of drizzling oil over the octopus sounds like it would be pretty tasty, and the finished meal looks like something that could be nice for an appetizer, or a full meal if something else was added in. One good thing about Babish is that this show tends to come up with some of the most interesting examples from an impressive number of sources that have entertained and informed people up to this point. It’s fun to check in on this show now and then and find something new and exciting to try, especially if it comes out right.