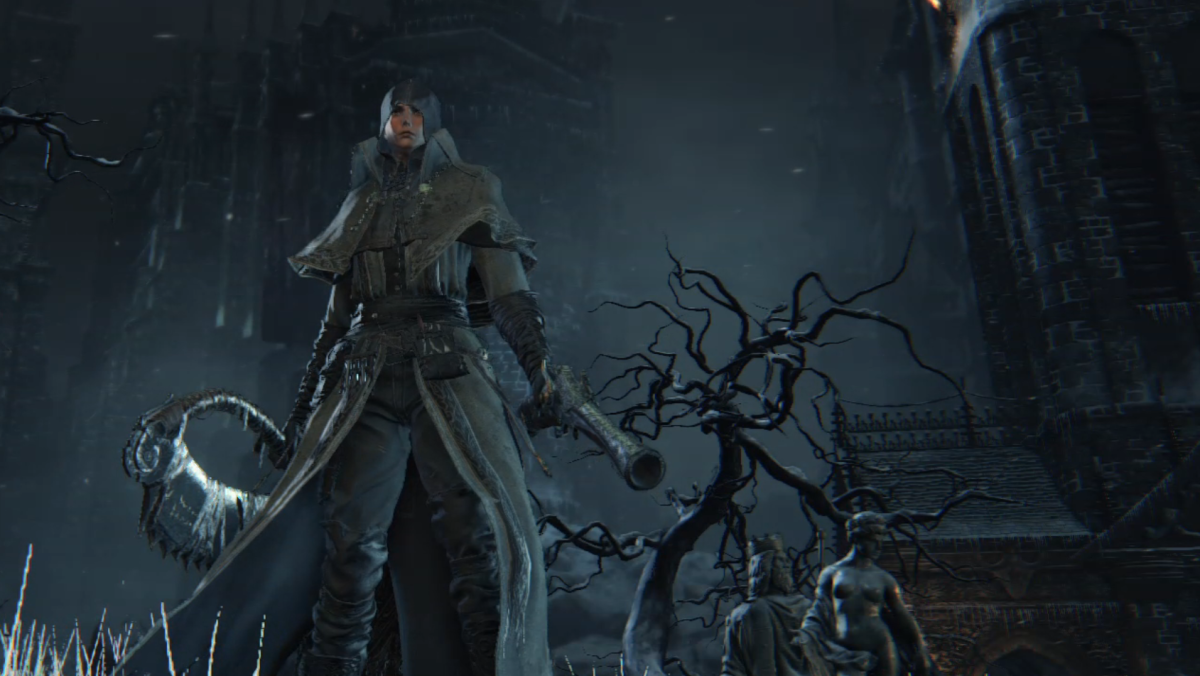 
It is said that Alexander wept, for there were no more worlds to conquer. So it is that I have rinsed Elden Ring of all meaningful challenges, cleared its lands of all noteworthy bosses, invaded countless strangers and seen most NPC quests through to their ends (grizzly or otherwise). I am done with Elden Ring, which is a problem because I still very much want to play Elden Ring.

In lieu of starting a new Elden Ring character and trying new builds, I’ve departed The Lands Between to get my FromSoftware fix elsewhere. But instead of finally finishing Dark Souls 1 or trying my hand at Sekiro, I’ve taken a trip to Yharnam—which is a problem, because (save a fan-made demake) Bloodborne never came to PC, right?

With me not owning a PlayStation (or a telly), and it being somewhat infeasible to travel down to England to pick up a save I started on (PC Gamer contributor) Sam Greer’s console six years ago, I’ve been playing Bloodborne via Sony’s much-derided PSNow streaming service. It is not what I would call an optimal way to play Bloodborne—a game that takes place entirely at night and on fire, two things video streaming famously loves dealing with.

And yet, it’s never unplayably bad. The input latency has been consistently fine, and didn’t stop me one-shotting Vicar Amelia and Darkbeast Paarl. Screen tearing and visual artifacting is an occasional pain, and the low resolution isn’t fantastic, but it’s still readable. Hell, you could even make the argument that there’s a certain thematic flavour to playing Bloodborne on the digital equivalent of a knackered VHS tape, a bloody horror flick picked off a charity shop’s shelves.

I started this as a neat curiosity. An experiment in seeing what game streaming is like these days, but not something I’d actually put up with for the runtime of a full game. Every time I’ve fired Elden Ring back up natively, I’m reminded what it’s like to run a FromSoftware game at a crisp 1440p and a (mostly) smooth 60fps. And yet, after a few minutes I find myself back in Yharnam, cutting up werewolves at what could generously be described as ‘serviceable’ visual quality.

Sure, part of this is I’ve put 150+ hours into one of these games while the other is still new. But part of it is also that Bloodborne’s lean, mean single serving is a welcome reprieve after feasting on Elden Ring’s vast buffet.

Let me make this clear though: this is not, as I am often want to write, a “new thing isn’t as good as old thing I like” feature. Elden Ring’s open world is a marvellous,  complex beast. An absolute escalation of the knotted, layered world design that has defined FromSoftware for over a decade, bumped up to Skyrim’s scale.

Moreover, Elden Ring’s world might be rotten and corrupt, but from its golden skies and autumnal fields to flocks of sheep grazing lazily, it’s not a world beyond redemption. Even as old demigods devour corpses and scheme over the husks of ancient kingdoms, Elden Ring feels heroic, a pulp adventure in a way Souls has never been.

But Elden Ring can be so much all the time that it can be utterly overwhelming. It contains within it all of Dark Souls, and then some—a thousand different weapons to master and spells to learn. There’s a dizzying list of bosses to face, all of which can be approached too early or too late, and with so many tools at your disposal it’s possible you’ll just flat-out break half of them with an infinite-mana beam laser.

Hell, you could even equip Bloodhound’s Step and Malenia’s Great Rune and play Elden Ring like a knock-off Bloodborne—dashing about recklessly and snatching back lost health.

But Bloodborne knows exactly how it wants you to play. A hunter has a range of weapons to choose from (saw blades, axes, electrified sticks and small swords hidden inside greatswords), but they’re still ultimately going to be nippy, aggressive wee rascals—Bloodborne simply doesn’t have an equivalent to a greatshield tank or full-on spellcaster.

It’s not quite as absolutely prescriptive as Sekiro—there’s still room to experiment if you want to, and some of Bloodborne’s weapons get quite strange indeed. But in Souls and Elden Ring, you get to pick what kind of fighter you want to be from a banquet of murderous options. Bloodborne makes that decision for you.

Because of that, the game can be far more specific in what skills its bosses want to test. It knows that most players have access to a pistol, so parries and viscerals become crucial parts of combat. Its baddies are more aggressive than anything in Souls, but it encourages you to be just as brutal in kind with a ‘rally’ system for restoring lost health by lashing back.

That singularity of character extends to the world itself, too. From autumnal cities to subterranean caverns lit under their own skies, Elden Ring has some of my favourite locations in FromSoftware’s catalogue. Those zones often connect in surprising ways, too, echoing the feeling of finding a nifty shortcut from Firelink back to the Undead Burg. But because all but the latest regions can be reached at any time, they often feel a little isolated from the world writ large. With Bloodborne, however, I get to experience a deep examination of a city well on its way to hell.

Yharnam is an Edinburgh-shaped puzzlebox of a place, a city with history and presence and the kind of interlocking civic design that only occurs when your town planner is Hidetaka Miyazaki. It’s a city that was already losing its mind by the time you show up, where strangers you meet through fogged windows go from somewhat-dismissive to ravenous, cackling beasts as the night progresses.

Over the course of the night Yharnam itself also changes, the sun setting and districts given new context as you unlock the game’s more eldritch secrets. The closest Elden Ring comes is a dramatic turn for Leyndell near the end of the game, a seismic rework that comes too late to be fully explored.

Elden Ring gives you the broad strokes of a mythological continent over the ages. Bloodborne is one bad night in the spookiest town there ever was.

I realise I am catastrophically late to the party on Bloodborne, a game that’s turning eight this year. And as mentioned, I’m not trying to drive a wedge between the two games—I have, after all, put over 150 hours into Elden Ring largely because going open-world means you can simply exist in its world in a way Souls games have never allowed.

But Bloodborne is a reminder of what FromSoftware traded in going open world. And from its faster, more aggressive combat to a world that feels absolutely oozing with vibes both gothic and eldritch, it’s a reminder of how hard the studio can go when it decides to pour all its energy into one, specific vibe.

After experiencing the overwhelming breadth of what Elden Ring had to offer, Bloodborne feels like a palette cleanser. It’s that extra dose of FromSoft I needed, and if you’re willing to put up with a whole load of PSNow bullshit, you can play it on your PC right now.