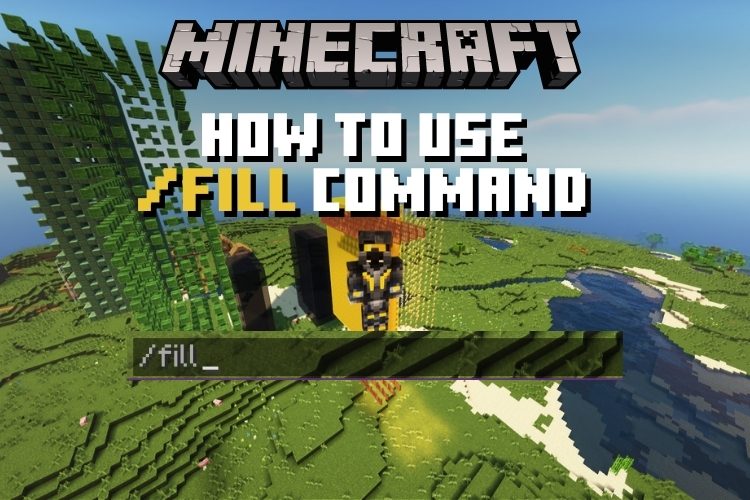 
Building structures is one of the most exciting parts of playing Minecraft. You can plan your own adventure maps or even create a model of Earth in Minecraft. The possibilities are endless. But if you are anything like me, the task of placing around thousands of blocks to create a structure feels overwhelming. Luckily for both of us, the game has a special feature. If you know how to use the fill command in Minecraft, then arranging, placing, and replacing blocks can feel like a piece of cake. This can save you days, if not weeks, of real-world time that goes into large builds. But even with such potential, it can’t help you with your architectural planning. For that, our list of best Minecraft house ideas is the only solution. With that said, let’s learn how to use the fill command in Minecraft and change building forever!

Unlike most popular Minecraft commands, “fill” has a lot of additional attributes to it. So, we have divided its guide into several sections to explain how the fill command to its full potential. Use the table below to explore the topic with ease.

Enable Commands or Cheats in Minecraft

Commands in Minecraft work basically the same way as cheats function in other video games. So, you must enable cheats in your world to use any command. Without doing so, you can’t use the fill command in Minecraft.

How to Enable Cheats in Minecraft Bedrock

Follow these steps to enable cheats in Minecraft Bedrock. The steps are the same for all Bedrock platforms, including consoles, PCs, and MCPE.

1. To begin, press the “ESC” key or your platform’s pause key. Then, click on the “Settings” option in the pause menu.

2. Next, within the “Game” section of the settings, look for the “Cheats” section by scrolling down. Under this section, toggle the “Activate Cheats” option.

How to Enable Cheats in Minecraft Java

Follow these steps to enable cheats in an existing Minecraft Java world:

1. First, press the “Esc” key to open the pause menu. Here, click on the “Open to LAN” button. You don’t need to play multiplayer or an internet connection to use it.

2. Then turn on the “allow cheats” option by clicking on it. Once done, click on the “start LAN world” button.

Use Cheats in Minecraft

After you have enabled cheats in your Minecraft world, it’s simple to use them. You just need to open the chatbox on both Minecraft Java and Bedrock edition. If you are on a PC, you can do so using the “T” key. Meanwhile, the console users have to press their dedicated chat key to open it. As for the MCPE users, Minecraft has a dedicated chat button captured in the following screenshot.

Within the chat, you just have to type “/” (slash but without quotation marks) followed by your command and its attributes. For example, sending a text that reads “/summon sheep” in your chat spawns a sheep right in front of you. As you will see later, we can add a variety of attributes to make such simple commands way more useful.

How Does the Fill Command Work in Minecraft

The fill command, as the name reveals, is used to fill areas in Minecraft with a set of blocks. But that’s not all. You can use this command to destroy and replace existing blocks as well. With that ability, you can create a variety of basic structures without manually placing a single block by hand. But before we dive deeper, here are a few basics of the fill command that you should know:

Find Your Coordinates in Minecraft

As you can guess, the fill command depends heavily on using the in-game X, Y, and Z coordinates to place blocks. The “Y” stands for the vertical height within the world, while Z and X stand for horizontal distance from the (0,0) coordinates or the center of your Minecraft world. So, before we use the fill command in Minecraft to make basic structures, let’s learn how to locate these coordinates.

Things are much simpler for players on the Java edition. Press the “F3” key within your world and the current coordinates will be visible in the informational overlay. The coordinates are displayed in the dimensional format, denoting X, Y, and Z values clearly (see screenshot below).

Bedrock users don’t have a dedicated key to make their coordinates visible. Instead, they have to turn on the “Show Coordinates” option within the game or world settings. Once done, their current coordinates will be visible at the top left corner of the screen.

How to Use Fill Command in Minecraft

Now that all the basics are out of the way, it’s time to understand the fill command to create a basic structure in Minecraft.

1. First, look for an open area where you want to build a structure. If you are in creative mode, you can even fly and choose to build in the air. As you will later see, we can also use the “/fill” command to clear an area by removing its blocks.

3. Then, open up the chat menu and type the following command:

Use Fill Command without the Coordinates

Now that you know how to use the fill command in Minecraft, it’s time to make it a bit easier. Instead of going from corner to corner, you can also make a structure next to yourself if you know its size. Let’s assume you want to make a cuboid, which is twenty blocks in height, ten in width, and five in breadth. So, the command you need to use will look like this:

Here the “~” symbol denotes your current coordinates. Then the integer next (~10) to it is perceived as a number of blocks before or after that position. So, ~ ~ ~ is your current position. Meanwhile, ~ ~-10 ~ is ten blocks below you, and ~ ~20 ~ is twenty blocks above you.

Which Blocks Can You Use in Fill Command

Usually, Minecraft structures can be built using only common building blocks – planks, stones, and others. They are complete square blocks with no additional features. But that’s not the case with the “/fill” command. This command allows you to use every placeable block in the game to make a structure. The game even suggests the name of such blocks while you are typing the command.

Do keep in mind that blocks such as veins and buttons might break when placed mid-air. That’s because they have to be attached to other blocks to be placed properly. Similarly, using liquids like lava or water to make structures won’t stop their flow after being spawned. Also, you can use some unplaceable entities like light and air with this command.

Once you get hang of the basic “/fill” command, you can take it a step further by changing how the game handles each structure. There are some keywords or subcommands that you can write after the fill command to customize it. Let’s go over each of these keywords.

How to Replace Blocks with Commands

You can use the “destroy” keyword to remove all existing blocks in the target area. When used underground, the result looks similar to the pattern of stripped mined areas. Its syntax is:

The major difference between the regular fill command and the one with “destroy” is that each replaced block gets dropped as an item you can pick.

How to Spawn Hollow Structures in Minecraft

Next up, “hollow” is an interesting keyword to use with the fill command in Minecraft. With it, only the external layer of the structure is spawned. So, instead of a fully filled one, you get a hollow cuboid. Its syntax is:

If you are wondering about the existing blocks within the structure, they get instantly replaced with air. So, the resulting structure is hollow even if it had existing blocks in its empty area.

The “outline” keyword is quite similar to “hollow”. It also only spawns the external structure of your command. But if you use “outline”, the existing blocks on the inside of the structure remain intact. This is a useful option to trap existing mobs and structures in hollow cuboids. The syntax goes as follows:

Finally, the last modifier keyword of the fill command in Minecraft is “keep”. It ensures that none of the existing blocks in the area are affected by the spawned structure. Its syntax is

Another way to understand “keep” is that if you don’t have empty or air blocks in the target area, then parts of your structure won’t spawn. The existing blocks of the area won’t be destroyed or replaced.

Note: On the Bedrock Edition, you have to type “1” before every keyword for it to be activated. So an outline command would look like /fill x1 y1 z1 x2 y2 z2 block 1 outline on the Bedrock edition. This number gives you additional information on the block’s behavior in a binary format.

Q. Can you undo a Fill command in Minecraft?

You can’t undo the fill command once executed. That’s why you should use the “keep” keyword to avoid accidentally destroying your structures.

Q. What is the command to clear a large area in Minecraft?

To clear a large area in Minecraft, you can replace that area’s blocks with air. To do so, use the following syntax of the fill command:

Q. Are the commands the same in all versions of Minecraft?

After almost every other update, Minecraft receives new commands as well as changes to the existing commands. If you want to use the “/fill” command on versions older than 1.12, you should refer to Minecraft Wiki to avoid errors.

Use Fill Command in Minecraft to Make Structures Today

Whether you want to surround your village with blocks or create empty spaces, the fill command in Minecraft is there to help. It can be a bit overwhelming to begin using the fill command in Minecraft. But with practice and experimentation, you will be natural at it in no time. You can also bookmark this tutorial and revisit it whenever you have a doubt. However, if you are done building cubic structures, create spheres in Minecraft. Yes, it sounds counter-intuitive but is possible even in survival. You have to install Forge in Minecraft to run some of the best mods to make your building process simpler. As for the ideas, our collection of the best Minecraft maps should give you some much-needed inspiration. With that said, the fill command in Minecraft has a diversity of uses, and we are just scratching the surface of its creativity. But what are you planning to do with it? Tell us in the comments!