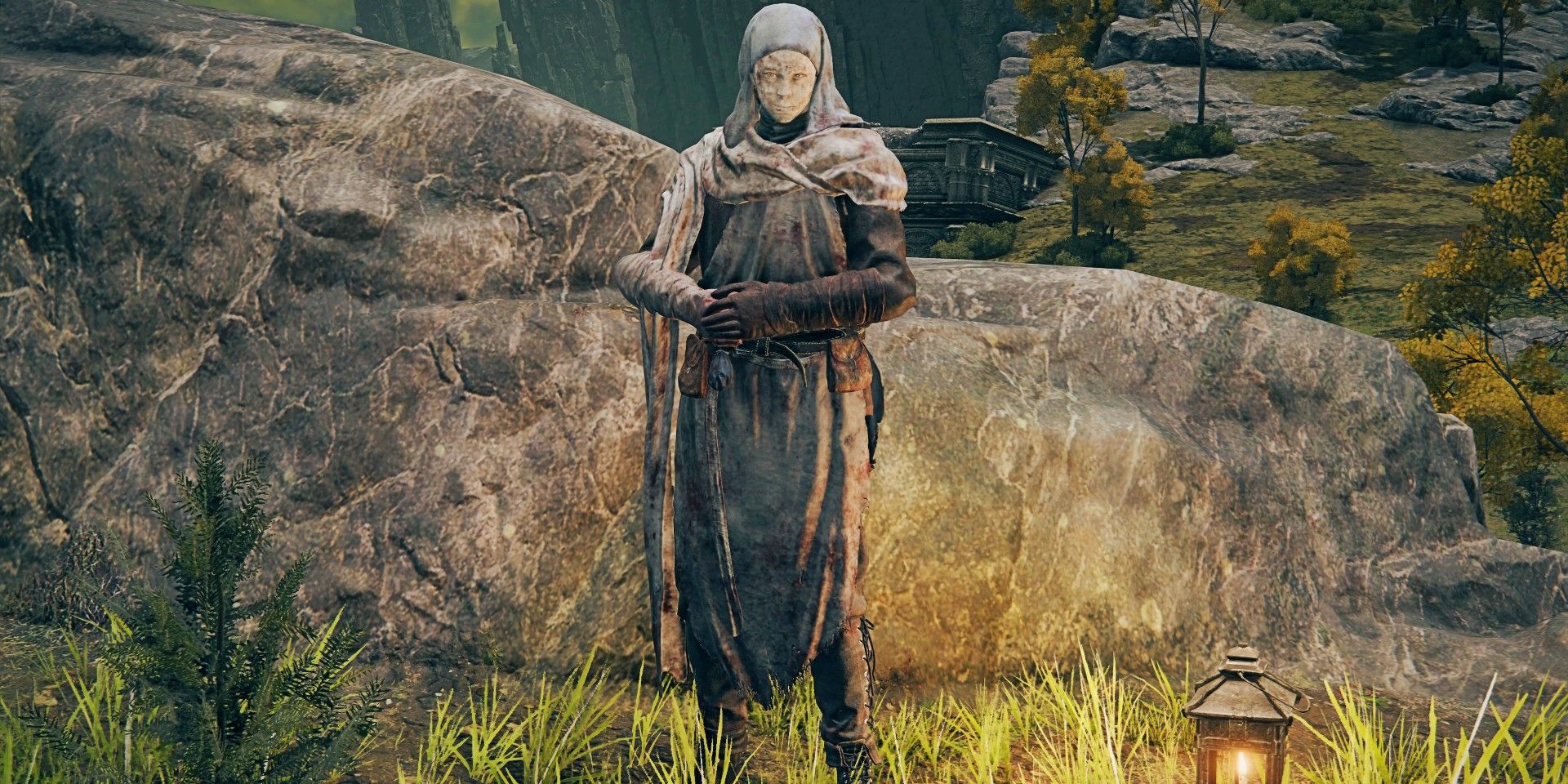 
White-Faced Varré is among the first NPCs players get to meet, and his role in Elden Ring is indicative of forces that operate in the shadows.

Elden Ring‘s picturesque landscapes are not entirely desolate, despite being prevalently inhabited by merciless adversaries that cannot fathom the Tarnished. As players slowly navigate their way through the Lands Between, they are bound to come across several NPCs who will gladly share their stories with them. Though some might openly elicit the players’ help, others, like the White-Faced Varré, are not exceptionally forthcoming about their demands or intentions.

After undergoing the initial trial and losing consciousness as per the scripted Grafted Scion encounter near the Chapel of Anticipation, players will soon find themselves in Limgrave and The First Step Site of Grace. A mysterious figure located a stone’s throw away from the bonfire is none other than the White-Faced Varré, and he will greet the players with a few helpful tips alongside a barrage of backhanded insults. While his presence may not seem particularly relevant at first, Varré is a bearer of a fairly lengthy and challenging questline — one which players should consider completing, especially if they enjoy the PVP aspects of Elden Ring.

RELATED: Elden Ring: How to Get Every Somberstone Miner’s Bell Bearing

Success Is The Best Revenge

One of the first comments Varré blesses the players with is about them being maidenless. He also alludes to the idea that they should follow the Grace and head in the direction of the Stormveil Castle. The players’ next course of action does not have to be strictly tied to reaching the castle grounds and felling Godrick the Grafted in order to progress with Varré’s elusive quest, but they should return to The First Step and talk to him as soon as they dispatch Godrick to the next realm.

Varré will congratulate the players on their accomplishments and instruct them to go to the Roundtable Hold to seek an audience with the Two Fingers. Players should follow this lead and talk to the Finger Reader Enia until they exhaust any viable information. Afterward, they need to head to Liurnia of the Lakes if they wish to report their findings to Varré. He will be eagerly awaiting their return at the Rose Church, which can be found west of the Fallen Ruins of the Lake Site of Grace.

Once there, Varré will ask the players what they think of the Two Fingers. If the players admit that something about them seems off, the quest will advance, and Varré will reward them with five Festering Bloody Fingers. To further explore Varré’s questionable intentions, players will have to enable co-op and put their newly acquired gift to use by invading other players’ realms three times. Since the outcomes of the PVP encounters are not relevant to the questline, simply invading and exiting the sessions will do.

The Road To Hell Is Paved With Good Intentions

After three successful invasions, Varré will express his desire to anoint the players upon their return. In order to have them become a full-fledged knight and serve the Lord of Blood, Mogh, Varré will provide the players with Lord of Blood’s Favor, a white cloth that needs to be soaked with a maiden’s blood. He will then make another comment about the players being maidenless and reassure them that, under such circumstances, any maiden’s blood is viable.

The closest maiden is located in the Church of Inhibition, found north of the Mausoleum Compound Site of Grace. However, before players can reach the Church, they will encounter Festering Fingerprint Vyke, whom they do not have to defeat. On the other hand, going back to the Chapel of Anticipation with the help of an Imbued Sword Key via the Second Belfry at The Four Belfries will have the players facing off against Grafted Scion before soaking the cloth in the deceased maiden’s blood.

The third, and arguably the least favorable option, is to locate and kill an NPC named Hyetta, who will first appear at the Lake-Facing Cliffs Site of Grace in Liurnia, but only if the players have completed Irina’s questline at Castle Morne. Presenting a blood-soaked cloth to Varré will have him do the unthinkable, as he will casually prompt the players to sacrifice one of their fingers. Once they do, Varré will give them a Bloody Finger, which will allow them to invade other players’ realms indefinitely. The gift is followed by a mysterious Pureblood Knight’s Medal and will technically mark the end of Varré’s quest. That said, letting sleeping dogs lie is not something the players should consider at this point.

Aside from Varré’s sinister ramblings, the inscription on the Pureblood Knight’s Medal suggests that it is best saved for later. Despite the warning, players can use it to reach the Mohgwyn Dynasty Mausoleum and explore the hidden area to their heart’s content. By doing so, they will eventually discover the Dynasty Mausoleum Midpoint Site of Grace, from which they can deliver the ultimate insult by robbing Varré of his treacherous life. He will have a couple of words to impart on the players before he draws his last breath and leaves behind a handful of Festering Bloody Fingers alongside Varré’s Bouquet, a weapon that scales primarily with Arcane.

The remainder of Varré’s equipment can be found past the game’s best rune-farming area, situated near the Palace Approach Ledge-Road Site of Grace. To acquire the White Mask and War Surgeon Armor Set, players will have to take on three Nameless White Mask invaders northwest of the Site while avoiding the onslaught of nearby birds, dogs, and unpredictable blood geysers. Fortunately, the three White Masks do not have to be defeated in one fell swoop and will remain down once vanquished.

KEEP READING: Elden Ring’s Fan-Made Seventh Ending Would Have Been Its Bleakest

Constantine Morgus is a Game and Narrative Designer by “trade”. He has also worked as a Content Writer and Ghostwriter in the past. Since Constantine is multilingual, he spouts (lyrical) nonsense more often than he would like to admit. Strangely enough, none of it is reflected in his Games Features… or so he would like to believe!