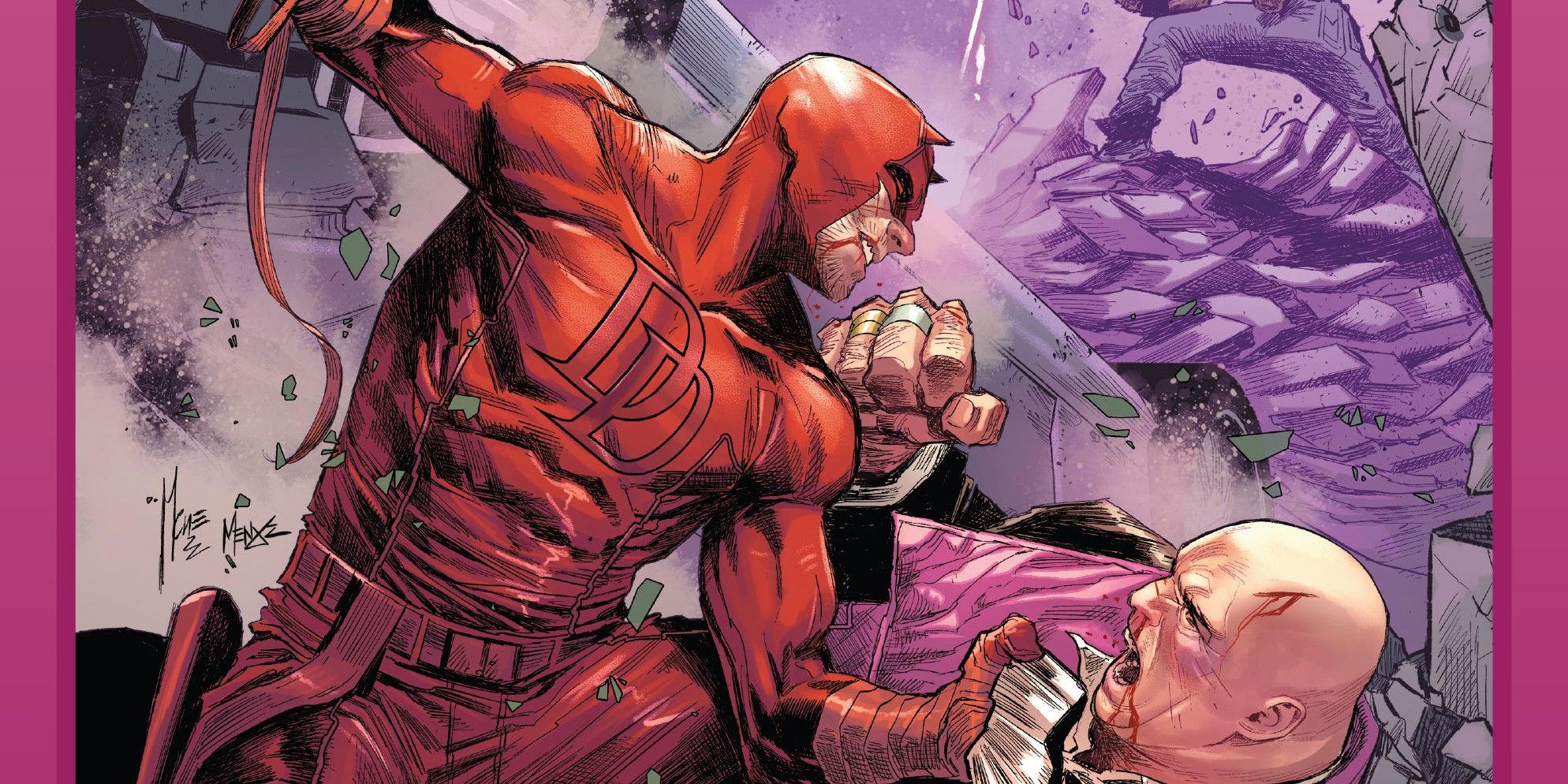 The con is up. The duly elected mayor of New York City, Wilson Fisk, has been manipulating his voter base and citizens’ emotions, using the Purple Man’s powers while lobbying for a crime-free city by incarcerating superheroes without due process. Fisk kills the man he thinks is responsible, Matt Murdock, aka Daredevil, but it is Mike Murdock who dies. Unhinged and unraveled, Fisk lets his Thunderbolts run amuck and sets the Purple Man on the remaining heroes, turning the whole city into a warzone. Written by Chip Zdarsky, with artwork from Marco Checchetto and Marcio Menyz and lettering by VC’s Clayton Cowles, the Devil’s Reign event from Marvel Comics comes to a bloody, battered end in Issue 6.

Devil’s Reign #6 opens with chaotic scenes on the streets of New York. Under the influence of Mayor Fisk, the Thunderbolts task force and the alternate variants of Octavius launch an attack on the Avengers and the remaining superheroes, leading to an all-out brawl. Having absorbed the powers of his children, the Purple Man has become immensely powerful, turning a good half of the city against the masks and superpowered individuals. The heroes are outnumbered and outmaneuvered when suddenly the rest of the cavalry make their windfall appearance. Meanwhile, Fisk and Typhoid Mary attempt to run away when the Daredevils stop them in their tracks, leading to an epic showdown between the archenemies.

An epic showdown between heroes and villains is par for the course for comic finales. Devil’s Reign #6 may use the standard trope, but there is order in the whirling chaos as concrete cracks and sparks of fire fill the air. The action-heavy finale splits into two narratives, questioning the morality of the choices that set heroes apart. Joe, the last remaining purple child, confronts his father in a heated battle, while an angry Daredevil savagely beats up the disgraced Mayor. Writer Chip Zdarsky mixes that inner conflict with rage and grief, interlacing Daredevil’s self-questioning narration over the events. Often, when drowning in despair, even the heroes can lose their way, but it is worth remembering that saving one’s own soul is saving a life as well.

The artwork of Devil’s Reign #6 is an orchestra of swashbuckling action, imposing panels, and pensive closeups. Artist Marco Checchetto and Marcio Menyz have been Zdarsky’s partners-in-crime since the start of his Daredevil run, helping Zdarsky shape the world that eventually paved the way for the Devil’s Reign event. From rage-filled smashes to energy clashes, it is not easy to depict a cohesive string of events in a battle zone, but Checchetto’s seamless strokes and well-framed illustrations take the reader into the midst of the action. Similarly laudable is Menyz’s use of colors, which portray a furiously heated atmosphere. The brightly colored characters against the backdrop of dusty, gritty wreckage create a contrasting feature in the artwork.

Devil’s Reign #6 moves at an enthralling pace, taking the reader through a rollercoaster of emotions. A story with Daredevil and Wilson Fisk must have a bare-knuckle brawl between the two, and the issue delivers on that front. Yet the aftermath of the event follows a cliched trail that keeps the pre-existing status quo intact, leaving a lot to be desired. Meanwhile, some things have changed as a consequence of Wilson’s egomaniacal actions, as interesting developments bring in a new dawn for the Marvel universe. While great artwork adorns the book, Devil’s Reign #6 ends on a promising yet rather generic conclusion as far as superhero comic events.

KEEP READING: The Punisher’s Life Was Once Saved In Scotland – By An Ancient Sword-Wielding Ghost

Sayantan is a comic book fan based in India who loves good storytelling more than anything else. His power to bore people to death with Kaiju lore is only rivaled by his love for books and movies. He has a master’s degree in Energy Tech and loves to watch soccer. You can take a gander at his artworks here: @kenichikyuro