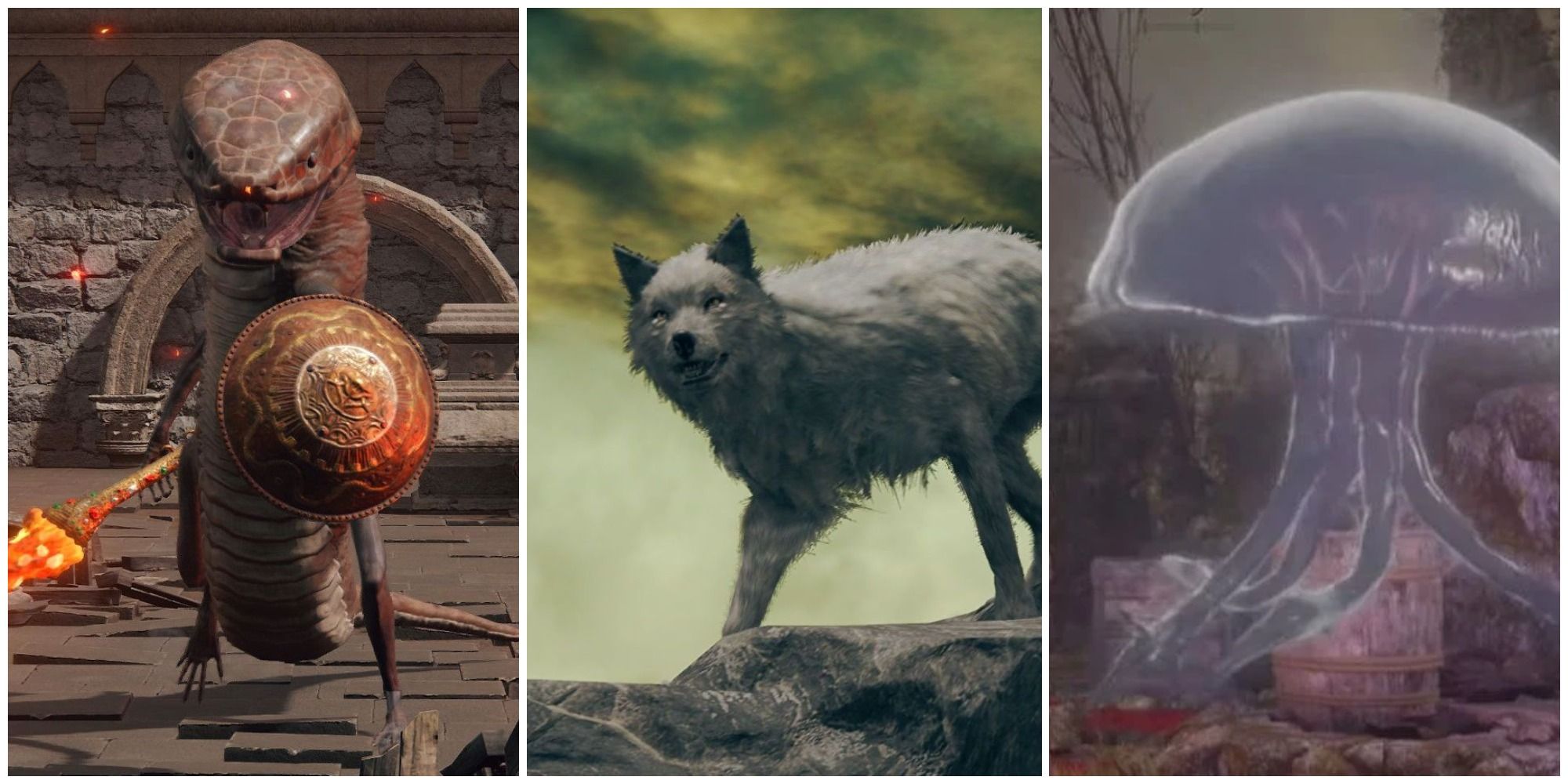 
Elden Ring is a massive achievement, managing to adapt the typical Souls formula of the strong enemy and level designs into an open-world structure, changing how people view open-world games as a result. But much of the game is also about being just a bit more accessible, and spirit ashes are part of that.

RELATED: The Best Pets In Games

It’s almost like having a little companion to help you in combat, summonable at certain locations. There’s a whole bunch of them, from famed knights to simple nobles and even weird mounds of stony flesh that spew poison. But have you ever thought to yourself “Man, these little guys would be great as a pet”? No? Well, get thinking it.

Everyone loves wolves! They’re fearsome but fluffy. A ball of terror and adoration at the same time. But a lot of the time, they can be viewed as lone wolves, hunting by their lonesome away from the pack. Of course, wolves actually love company and in fact love hunting in packs.

These wolves though? They’ve been exiled from their pack, and you’re the lowly Tarnished giving them a new family. Wouldn’t it just be great to drag them into reality and give them the family they deserve, away from all the demi-gods and dragons? Plus, a wolf will definitely keep trespassers away from home.

After the Shattering, many of the Demi-gods of The Lands Between fractured with it, turning against each other all in hopes of gathering the Great Runes themselves. Major among them is Godrick, ruler of Stormveil, and a pitiful creature hanging to the vestiges of gold of his lineage.

His greatest love is grafting, folding layers of Tarnished upon themselves in hopes of gaining the guidance of grace, and has extended this to the hawks of Stormveil. Their talons clipped and replaced with swords, they’re a deadly creature. But can you really say you don’t love it? Sure, it might cut you up by mistake. But a hawk with swords would be a pretty cool pet.

Early on your journey towards Stormveil, you may come across a little shack containing Roderika, a woman who’s lost something dear to her spirits. But talking to her enough, she entrusts you her beloved Jellyfish, that maybe you can guide it home in her stead. It even has a name, Aurelia.

Aurelia is a brave little jellyfish, shooting poison at enemies to keep her safe, and she even has a little story of her own. But she has the greatest aspects any pet needs. She’s cute, loving, looks pretty damn cool, and can vanquish your enemies. You can even show her the stars whenever she wants.

Rats are something of a meme in FromSoftware games at this point. Lord of Cinder, Gwyn, and all others be damned, rats are the true antagonists here, swarming you en masse and leaping at a moment’s notice, even up cliffs now. They’re unstoppable. But what if the rats were on your side for once?

When summoned, they appear out of nowhere to swarm your enemies, taking them by surprise just like you. But they also cost nothing to summon, and there are more rats as you upgrade. Imagine, a completely self-sufficient pet! Sure, they might go missing and eat everything you own, but at least they’ll always keep you safe.

Just like rats, FromSoft also has something of a history with dog enemies. They tend to be godly in power, even if lacking in stature and appearance, and seemingly even have the ability to teleport to wherever you are at a moment’s notice. Impressive ability. They’re toned down a bit in Elden Ring. Except for the Rotten Strays.

RELATED: The Best Skies In Gaming

The Rotten Stray may not deal 11,640 damage per second, but they put up a good fight. Ugly as all hell, they’re afflicted with Scarlet Rot and aren’t afraid to pass it on. So you might be thinking, how does that make it a great pet? Well, rats gave the world the Bubonic Plague, but we still love them. The Rotten Stray is the same!

Maybe you encountered a Beastman early in Limgrave, and then forgot about them for almost the rest of the game, and then had a flash of familiarity when you finally reached Farum Azula. The beastmen have something of a history to them, protecting the lands of Farum Azula and its dragons with undying loyalty.

Though undying might be a bit generous. The beastmen ashes are strong and will swarm enemies, but they don’t last very long. Loyal until death, then. But everyone wants a pet that’s loyal to them, that seems like there’s a genuine understanding. But they’re also bi-pedal and kinda human-like, so maybe you could just ask them.

Dark Souls had plenty of crystals, and they were pretty closely tied to the lore and the magic system. And well, Elden Ring is much the same, though the crystals themselves came from the stars. That kind of makes them alien, but who cares when you get to fire meteors and lasers at enemies?

But then there’s the Crystalians, almost unbreakable rigid enemies made of crystal. Or rather, they simply are crystals, but sentient. They are quite the fight, nigh unbeatable without something blunt. Maybe they wouldn’t be the greatest pet, but they’d make a hell of a house decoration! So shiny.

Dotted throughout the catacombs, they’re sturdy little fellas and just a bit too fast at times, considering they’re made of stone. But you can actually begin the game with them as your summons, and they’re even friends with each other. Just a gang of buddies. Plus they have fire pots stored somewhere. As a pet, they’re the best, most resourceful buddies you can get.

When people think of pets, the usual ones that come to mind are dogs, cats, birds, and the like. But what about our cold-blooded besties? Who can look at a little lizard with a big smile and think they’re not pet material, let alone a threat? Not FromSoftware, it loves putting lizards in these games.

The Man-Serpents of Mt. Gelmir are a bit unfortunate, a blasphemous creation of a demi-god and serpent god. But look at their giant heads! And the one you summon has a big fire whip they like to stretch around and whip with, and they have just the biggest smile on their face. As a pet, they’ll be putting that smile on your face too.

If there’s anything FromSoftware does well, it’s make characters that are so wonderfully silly that they give their dark worlds a different feel entirely. Alexander the warrior-jar is a great example. He’s just a giant jar that wishes to fight. Odd, but indeed a lovable sort. And then there are the little guys.

To be honest, it feels awful to kill these little guys. All they want to do is fight for glory, win or lose. The Soldjars of Fortune are no different, sacrificing themselves for your cause. But maybe don’t summon them too much, or the guilt will weigh too heavy. But you can bet they’d make a great pet, or storage container, or even just decoration. So versatile, and lovable!

NEXT: Best Video Games You Can Pet The Dog In

Hilton is a List Article Writer with TheGamer. He’s passionate about a whole bunch of games, maybe too wide a list to mention them all, but has always wanted to be involved in them more. And writing about them seems like a pretty strong way to do that. He just wants to spread some fun and write something that will make you feel the same passion for games that he has.