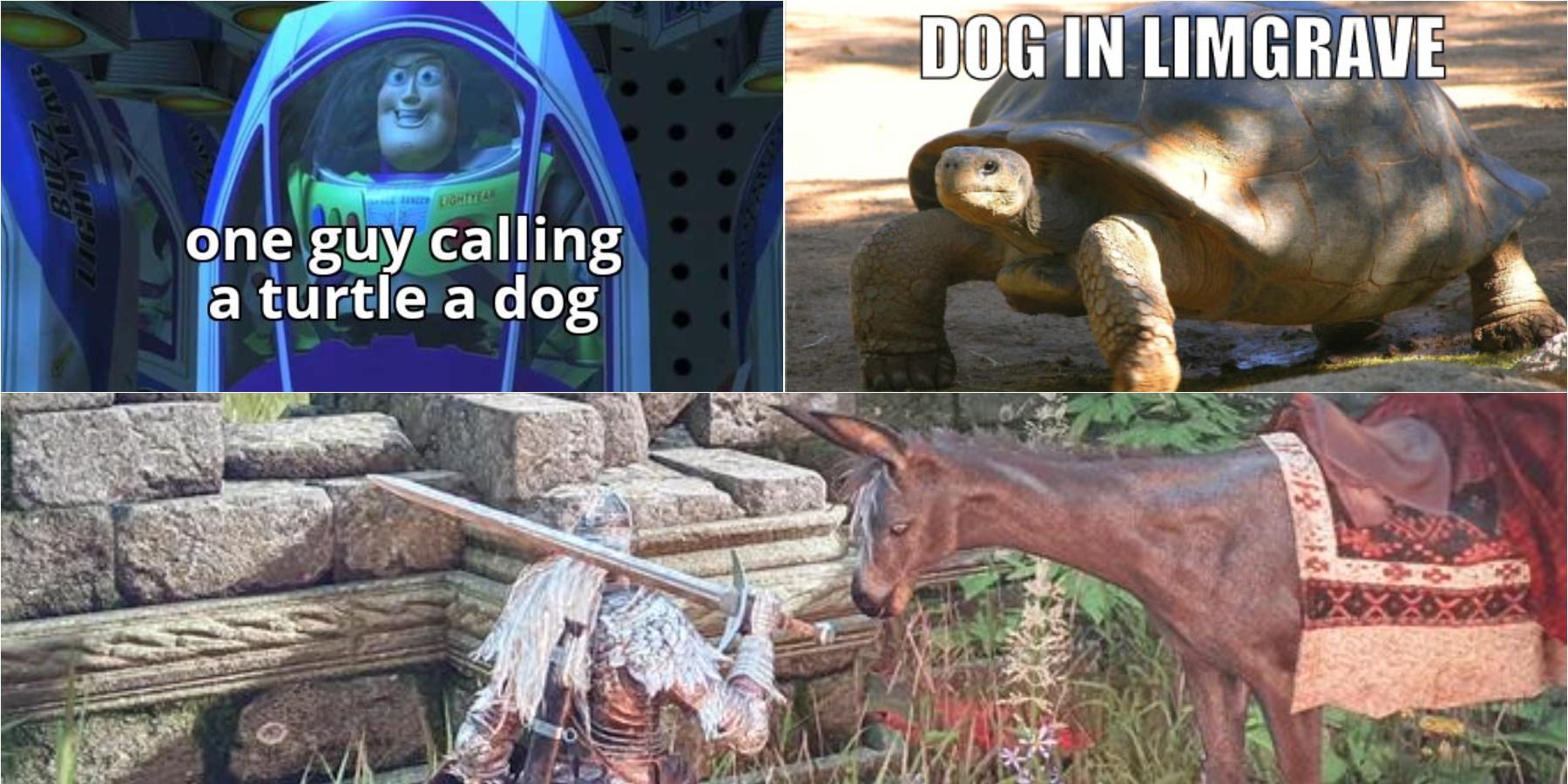 
Elden Ring is definitely one of the best titles that From Software has produced and although there are many out there that may not hold it as their “number one” game, it’s hard to ignore the success it’s seen. Even players who weren’t exactly fans of the Dark Souls series have found themselves grinding through the Lands Between in order to become Elden Lord. This influx of new players has led to some pretty hilarious memes, but it’s hard to deny that the “dog” memes running rampant through the release are perhaps the most well-known.

RELATED: Hilarious Elden Ring Clip Shows Player Trolling Their Dad and Tricking Him to His Death

There is something so innocent and so hilarious about the simple “mislabeling meme.” Those that have ever come within the eyesight of a tortoise have likely seen some sort of sign pointing to it, usually labeling the creature as dog. Here are some of the best memes that are dedicated to this community-wide meme spreading like a virus through Elden Ring.

Although there are a wide array of dogs that will actually tear players limb from limb throughout the realm of Elden Ring, some players started marking each tortoise they came across with an in-game message reading “dog.” The idea spread like wildfire and soon it was hard to find any tortoises without at least one glowing white message that read “dog” or some other variant of the meme.

This fan art from 99Hunters on Reddit perfectly expresses how players feel about the fad, and how beloved the turtles and their kind have become throughout the Lands Between.

The idea of turtles and tortoises being dogs is so deeply rooted in the Elden Ring fanbase that even the Wiki has run with it. Well, not really, but this hilarious meme gives the impression that it has. The incorrectly marked header above the picture probably looks off to anyone who hasn’t played the game yet, but those who frequent Elden Ring wouldn’t question the title. It also lists its loot and the number of Runes it drops, but who could be so cold as to slay a “dog” in the Lands Between?

The “dogs” that players have been memeing certainly aren’t the only dogs skulking around Elden Ring. Players have grown accustomed to dealing with dogs in all forms in the Lands Between, with some of the canines found in Caelid actually striking fear into the hearts of any adventurers brave (or foolish) enough to enter the Scarlet Rotted zone. This meme is the perfect representation of each dog found throughout the regions of the game, although we’d argue that the dogs found in the West aren’t as friendly as this meme makes them out to be.

RELATED: It Might Be Best To Wait A While Before Playing Elden Ring

The best thing about the dog phenomenon is that it slowly started to branch out and infect other parts of the game. Suddenly, for a while, everything was a dog. It can be a bit overwhelming for players who are constantly stopping to read “helpful” messages that are only pointing to dogs, but it’s hard not to laugh at the silly signage plastered all over the otherwise hard-as-nails areas. Players even began labeling other animals as dogs, which led to some pretty goofy screenshots, like this picture of a “dog” that’s clear more donkey-shaped.

One of the best things about memes is that they often blend into one another. Some of the most prominent memes that have been shared are eventually morphed into other genres and sub-types thanks to their iconic status. Here, someone has taken the legendary “Is this a Pigeon” meme and transferred it to the dog phenomenon that spread throughout Elden Ring. It’s beautifully made, down to the last detail of “Could this be a dog?” as a nod to only being able to use Elden Ring’s message system to formulate sentences, instead of it being a word-for-word match of the original meme.

As soon as players started labeling the tortoises as dogs, players well-versed in “Borat lore” knew what they had to do. The Sasha Baron Cohen character had his own run-in with these “shelled canines,” prompting him to ask the handler what type of dog the tortoise was. It perfectly fits the aesthetic of the Elden Ring meme, and it’s entirely possible that this is where the original meme spawned from.

In the modern age, good memes spread like wildfire. All it takes is one spark for a meme to suddenly be front and center of everyone’s social media feeds. That’s why the Elden Ring dog meme managed to achieve such massive scale, quickly. All it took was for one or two players to label a tortoise as a dog and soon everyone was leaving as many messages as possible near the adorable creatures to signify their newfound canine qualities. It’s amazing how quickly information can move on the web, and that extends to online games.

Players that spend long enough in the Lands Between may begin to question things. Elden Ring is such a gripping and addictive game that it’s hard to put down once players really get into it. The challenging bosses, paired with the allure of multiplayer, and a massive world to explore has many putting in (at minimum) 100 hours or more into the latest From Software release. Those that find themselves having a hard time distinguishing between Elden Ring and reality may begin to question exactly what a dog is, which is the idea posed by this meme. Maybe none of us knew what dogs really were until this game was released.