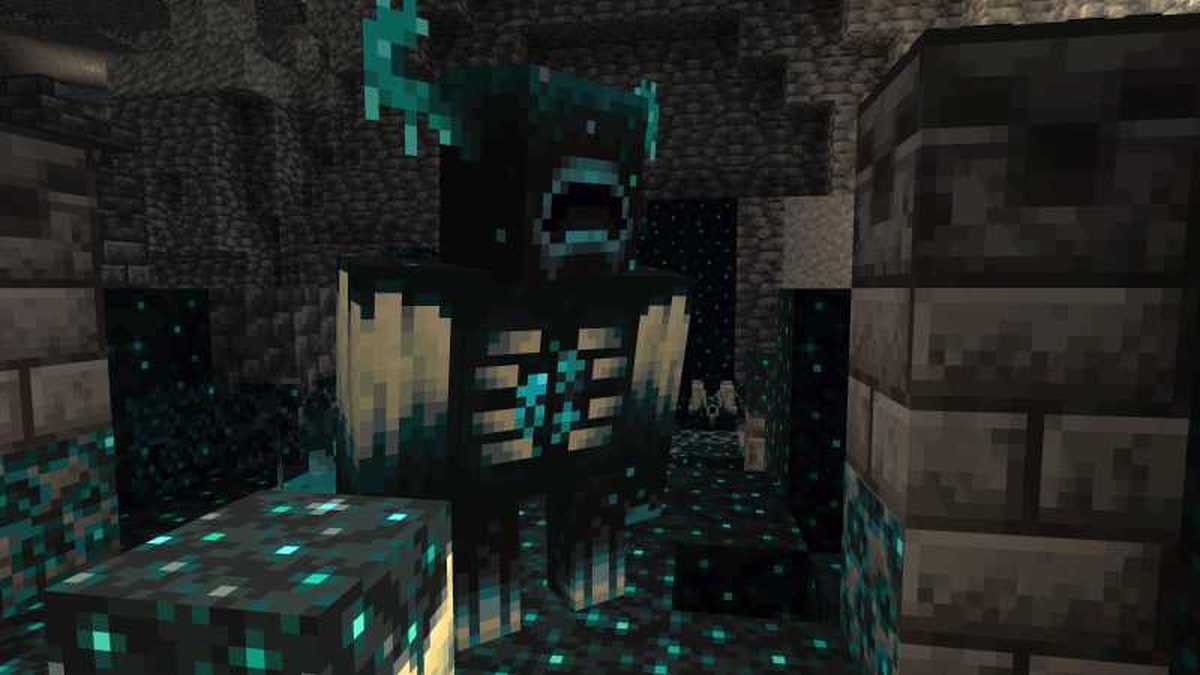 We’ve been getting to know The Warden since its release in the most recent Minecraft snapshots. If you want to know more about this new terrifying creature, where it can be found and just how to avoid its deadly attack, then we’ve got everything you need to know right here.

The Warden is the newest hostile mob to enter Minecraft. Its health is greater than that of any other Minecraft mob, so players who just find the Ender Dragon and the Wither all too easy to defeat now have something else to defend against. Unlike those two existing mobs, though, The Warden doesn’t drop any loot, and is almost impossible to kill, so players need an entirely different play when venturing into the Deep Dark.

What is The Warden in Minecraft?

This devastating mob is a first for Minecraft, in many ways. The Warden is the only blind mob, using hearing and scent to hunt out players, and is also the first mob that doesn’t drop any items when killed. The Warden also only drops 5 Exp Orbs if killed, so it really isn’t worth the hassle. Instead, The Warden was introduced to make exploring the Deep Dark more challenging. In particular, The Warden’s home, the Ancient City, which is full of valuable loot for the player to find and keep – if you survive.

Where and how does The Warden spawn?

The Warden will only spawn underground in the Deep Dark biome, the new underground-only biome where Sculk Sensors and Sculk Shriekers generate naturally. More than one Warden can spawn at a time, as long as they are not within 48 blocks of an existing Warden.

The spawn criteria for The Warden are different from any other mob in Minecraft. To trigger a Warden spawn, players must activate a Sculk Shrieker three times. Each time the Sculk Shrieker is triggered, the player’s “Warning” level will increase by 1, and when it reaches 3, a Warden will dig its way out of the ground in a 11x13x11 block radius of the last activated Sculk Shrieker.

A Sculk Shrieker placed by a player in Survival mode will not trigger a Warden spawn, as the “can_summon” tag is set to false automatically. Therefore, players will only be able to encounter a Warden near naturally-generated Sculk Shriekers in the Deep Dark.

When The Warden spawns, it will try and locate the player or other mobs by sound and smell. It can determine nearby vibrations, including a player’s footsteps, and will head in the direction of movement it deems “suspicious”. The more movement a Warden detects, the more aggressive it gets, which the player will be able to sense from a quickening heartbeat sound in-game.

To make matters worse, Wardens are able to move faster than the player when angered, and cannot be slowed down by water, lava, rails or other such obstacles, so running away isn’t really an option.

As a Warden approaches a location it has sensed movement in, you might notice it sniffs the air. The Warden’s keen sense of smell means that, even by staying still, a player can still be sensed by a nearby, aggravated Warden up to a distance of 20 blocks. If the Warden then reaches a high enough level of agitation, it will roar, signalling an alerted state, and will be able to pathfind to the player regardless of movement and vibrations. If, then, the player and the Warden collide, or the player attempts to attack the Warden first, it will use its melee attack, capable of killing a player in full, unenchanted Netherite armor in just one hit on Hard mode.

Following snapshot 22w15a, The Warden has also been given a ranged attack, making evading the terrifying mob even harder. If The Warden is in pursuit of a player hiding behind a wall or on high ground, it will let off the ranged attack, visible as a blue-green expulsion of particles from its chest. At the moment, Mojang hasn’t actually revealed the distance this ranged attack can reach, but we’ll update this as soon as we find out. What we do know, though, is that the attack deals the same amount of damage as the melee attack, so avoid it at all costs!

When does The Warden despawn?

After 60 seconds of being calm – in other words, unable to sense any triggering vibrations – the Warden will burrow back under the ground and despawn. While we don’t recommend attacking The Warden anyway, it’s worth noting that the mob is completely invulnerable during burrowing and emerging, so don’t think you can catch it unawares. The sounds of The Warden burrowing and emerging are unique, so you’ll know when this is happening, even if the monster is not in your eyeline.

Our tips for avoiding the Minecraft Warden

Distraction and sneaking are key to evading the attack of The Warden. Firstly, we’d suggest making sure you have a few projectiles to hand. Thankfully, snowballs generate in Ancient City loot chests for this very reason, so you should be able to carefully gather some. Then, if you do trigger a Warden (which we’re guessing you will, at least during your first few times in the Wild Update, if for no other reason than to see it in action), send it off in the wrong direction with a few carefully aimed balls of snow.

From there, sneaking prevents you from making vibrations as you move around, so you can quietly move away from The Warden while it’s looking the other way, hopefully far enough that it can’t sniff you out. You’ll also find that Ancient City structures are lined with Wool blocks and Carpet, which also muffle the sound of your footsteps, try and stick to the wool paths where possible.

If you don’t go out of your way to aggravate The Warden, it shouldn’t be too difficult to avoid it long enough for it to burrow its way back underground and leave you to loot in peace. You can then avoid triggering its appearance again by sneaking near Sculk Sensors.

That’s everything we have on The Warden so far. If you want to know about the other terrifying additions to The Wild Update, why not check out our guide to Ancient Cities? You can also find out more about the new Music Disk, exclusive to Ancient City loot chests, in our article about snapshot 22w16a.

And head over to our Minecraft hub for even more news, guides and how-tos!