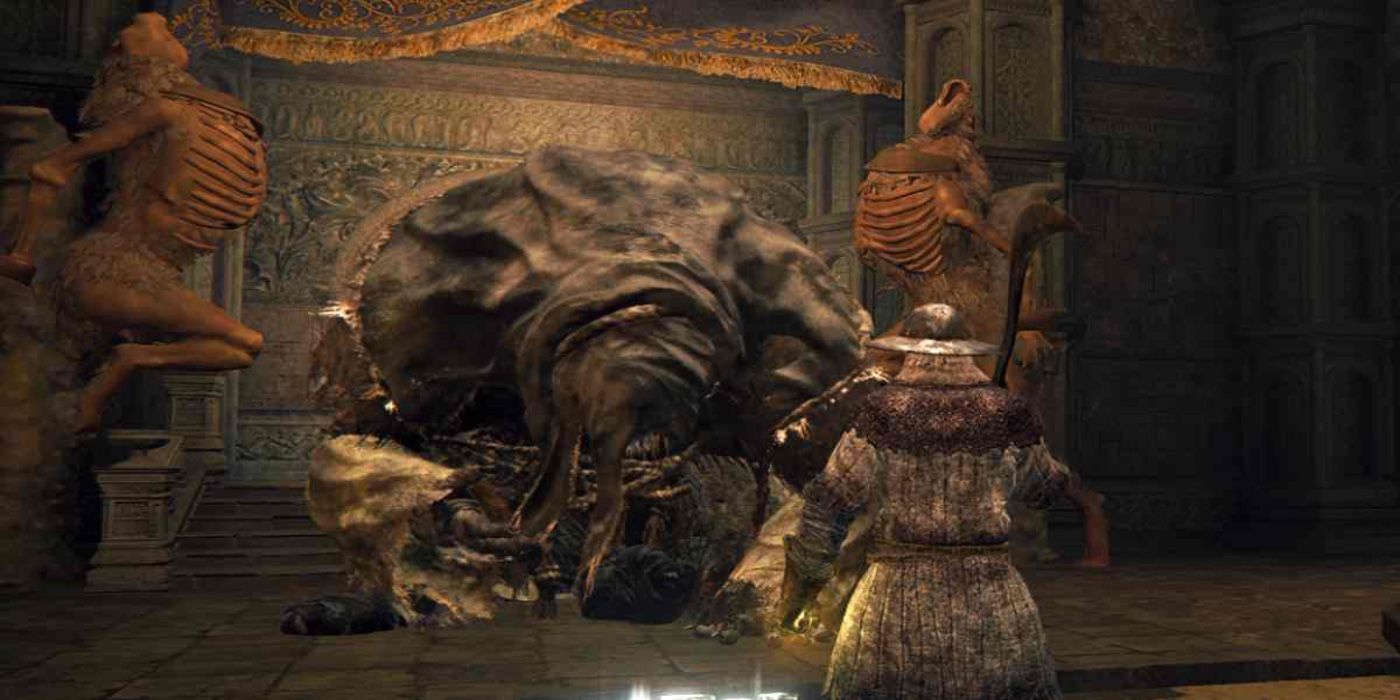 
When players go off the beaten path and explore the world of Elden Ring, they’ll sometimes find friendly NPCs who will offer quests for the player to complete in exchange for enticing rewards. One of the more mysterious and daunting tasks players can take up is assisting a large, hooded creature known as Gurranq, the Beast Clergyman, who wishes to atone for his sins involving the undead that are rising up across The Lands Between.

To start this quest, players must make their way to the ruins of Summonwater Village in the northeastern side of Limgrave. There, they will find an optional boss called Tibia Mariner, a spirit that rides in a boat across the shallow waters of the flooded town. While not a particularly hard boss, the Tibia Mariner can teleport around the area and summon skeleton warriors to assist in fighting players. The best strategy for fighting this boss is via horseback by summoning Torrent and engaging in hit-and-run attacks when possible. Defeating this Mariner will reward players with a Deathroot, a key item to completing Gurranq’s quest and reaping its highly useful rewards.

RELATED: ‘Let Me Solo Her’ Represents the Best (and Worst) Elements of Elden Ring’s Multiplaye

After fighting the Mariner, players should return to Summonwater a while later, where an NPC known as D, Hunter of the Dead will appear and direct players to speak with Gurranq in the Bestial Sanctum in the far east of Caelid. This location can be easily reached by traveling through a Sending Gate near the Third Church of Marika. Coincidently, this will also enable players to reach a lucrative, early-game rune farming location.

Once players talk to Gurranq, they can give him the Deathroot in exchange for the Clawmark Seal. He’ll then direct players to gather more Deathroots for him, providing them an item known as the Beast Eye that will notify them if they enter a location where Deathroot is present. There are a total of nine Deathroots found throughout The Lands Between. Players should be aware that after trading in the fourth Deathroot, the next time Gurranq is visited, he’ll go crazy and attack. Fight him until he comes to his senses and stops, saying it won’t happen again. Rest at the site of grace to talk to him again.

The easiest Deathroots to gather are from the four Tibia Mariner bosses, including the one already beaten in Summonwater. The second Tibia Mariner can be found south of the Artist’s Shack in Liurnia of the Lakes, the third in the Wyndham Ruins in the Altus Plateau, and the fourth on a cliff overlooking Castle Sol in the Mountaintop of the Giants. Players should be advised that the latter two bosses will summon large skeletons of giants to attack, making their fights more difficult.

RELATED: Elden Ring: How to Complete the Dung Eater’s Questline

The remaining five Deathroots are located in underground, optional dungeons. One can be found in the Deathtouched Catacombs in Limgrave, guarded by a Black Knife Assassin. However, this enemy has a reduced health bar, making the fight easier than it would normally be. Another Deathroot is located in the Black Knife Catacombs in northeastern Liurnia. Fighting the Black Knife here isn’t necessary to attain the Deathroot. Instead, players must fight the Cemetery Shade.

The next Deathroot can be found by exploring the Gelmir Hero’s Grave on Mt. Gelmir, near the Primeval Sorcerer Azur site of grace. This dungeon can be difficult to navigate due to environmental hazards such as the Chariot traps and pits of lava that players must avoid. The boss at the end is known as the Red Wolf of the Champion, which looks and fights almost exactly like the Red Wolf of Radagon at the Academy of Raya Lucaria.

On the Mountaintop of the Giants, just before traveling across the long land bridge guarded by Fire Monks, the Giants’ Mountaintop Catacombs are home to the next Deathroot. This dungeon can be disorienting since some rooms look almost identical, and many hallways lead to traps and dead ends. Once the boss area is finally reached, players must fight the Ulcerated Tree Spirit.

RELATED: Elden Ring: How to Defeat Hoarah Loux, the Warrior

The final Deathroot can be found within the Hidden Path to the Haligtree, a secret area in which players must first collect the hidden medallions to access. Once this is done, players can drop down from where a broken piece of railing is in the center of the dungeon, onto an invisible platform. Players can drop rainbow stones to ensure they don’t walk off of the edge.

In this dungeon’s boss area, players must face the Stray Mimic Tear, which forces players to fight an exact copy of themselves and everything they’re equipped with. If players enter the area with all weapons and armor removed, the Mimic will also appear with nothing and will be unable to hurt players while they reequip their weapon and fight a defenseless foe.

Once players turn in all nine Deathroots, Gurranq will depart, albeit unsatisfied that his sins haven’t been absolved. For each Deathroot given, the player will receive the following useful rewards in a fixed order: the Clawmark Seal, Bestial Sling, Bestial Vitality, Ash of War: Beast’s Roar, Beast Claw, Stone of Gurranq, Beastclaw Greathammer, Gurranq’s Beast Claw, and an Ancient Dragon Smithing Stone.

Robert Koumarelas is a writer, video and photo editor. Graduating from Sheridan College for Journalism, covering and writing about great stories has become as much passion as a career. Video games are not just a fun hobby for him, but a legitimate form of art and story telling that engages fans.