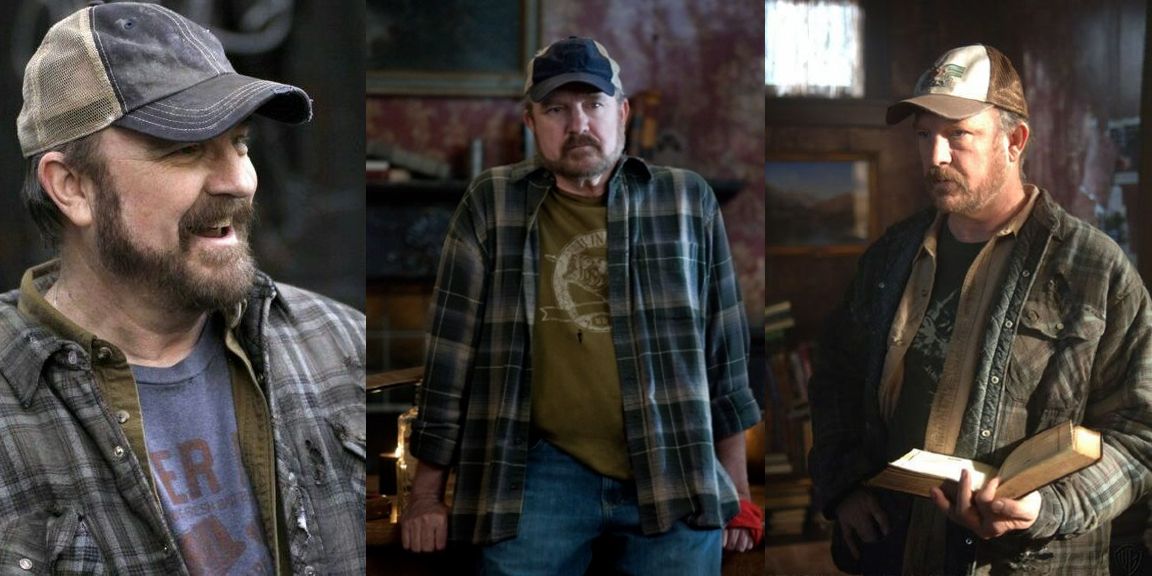 
For more than 15 years, Sam and Dean Winchester proved to be true heroes (no matter what their own thoughts told them). While the Winchester brothers are the main heroes of Supernatural, it doesn’t mean they were the only ones. As one of the most beloved side characters in the history of the show, Bobby Singer is a hero in his own right.

Played by Jim Beaver, the surly curmudgeon Bobby Singer is a masterful hunter, a speedy and thorough researcher of folklore, and a surrogate father to Sam and Dean. He even comes with his own ghost-proof panic room. At times, when Sam and Dean are too focused on each other (or not focusing at all), Bobby steps in and becomes the hero the victims in the show deserve.

When Bobby Closes The Devil’s Gate

In both parts of the season 2 finale ‘All Hell Breaks Loose’, Bobby plays a crucial part. He helps Dean find Sam and tries as hard as he can to help Dean with his grief when Sam is tragically killed in the saddest death of the season. He figures out that demons are amassing in Southern Wyoming around a 100-square mile devil’s trap built by Samuel Colt, maker of the demon-killing gun.

While Sam and Dean are dealing with Yellow-Eyes (later revealed to be Azazel, Prince of Hell), Bobby and Ellen are left to close the Devil’s Gate. Though the Winchesters get revenge against the demon that killed their mother, the real hero is Bobby for focusing on the bigger issue.

When Bobby Figures Out The Apocalypse Is Coming

Haunted by spirits of people they couldn’t save from supernatural creatures, Bobby, Sam and Dean are stuck in Bobby’s Panic Room, which he just happened to build when he had a weekend off. Bobby proves himself to be the best at researching lore once again, not only does he prove that only an angel can raise Dean from Perdition but that the ghost haunting are part of something much bigger.

“The Rising of the Witnesses” is one of the first steps in a much bigger prophecy, one that comes from the Book of Revelation. Before Castiel or any other angel reveals the true purpose for Dean’s miraculous resurrection from Hell, it’s Bobby, not Sam or Dean, who is the one to learn that the Witnesses are a sign of the oncoming Apocalypse.

When Bobby Expels The Demon Meg From Sam

In a memorable season 2 episode, Sam is possessed by the demon Meg. While it took Dean a while to figure this out, Bobby is able to tell immediately with one little hack, putting holy water in his guests’s beers. As a con-man, he knows when someone is trying to con him and demons should really know better at this point than to mess with Bobby Singer.

With Dean back after being shot by Meg/Sam, Bobby begins the exorcism which doesn’t exactly go as planned. The incantation does nothing leading Bobby to find a mark on Sam’s arm which binds Meg to her meat-suit. Freeing herself, she begins to torture Dean but she forgot to make sure Bobby is out for the count. Before she can kill Dean using Sam’s hands, Bobby destroys the binding link with a hot iron poker and just like that, Bobby saves the day again.

When Bobby Risks His Days In Heaven

In Bobby’s first return since being saved from Hell by Sam in season 8 for the Trials, Bobby is quickly thrown back into the grind. Sam and Castiel reach out to the surly hunter in Heaven via a psychic and ask him to help break out Metatron so that they can find a cure to Dean’s Mark of Cain.

While Dean was completely unaware of what was going on and Sam was waiting in a playground by the door to Heaven, Bobby and Castiel were doing all the heavy lifting. While Castiel could leave after the mission, with their hostage Metatron beside him, Bobby had to go back to his personal spot in paradise and await punishment from the not-so-Heavenly Host. He risked his life and his own Heaven to help his boys, like the true father he is.

When Bobby Stabs Himself To Save Dean

When Sam and Dean are unable to stop the Apocalypse from coming, they move onto Plan B: call Bobby. Though everything is business as usual at first, when he learns Sam was the one who freed Lucifer from the cage he becomes heartbroken and mad. He continues to help Dean figure out where the Michael Sword could be but as soon as that’s done, Bobby turns.

Quickly taking out Dean, Bobby is revealed to have been possessed by one of Meg 2.0’s demons since arriving at the motel. Just as the demon is about to kill him, Bobby is able to get control for just a second but it’s long enough to stab himself, killing the demon possessing him. It is a truly selfless act that leads him to be paralyzed from the waist-down for the remainder of the season. It’s no wonder Bobby’s love for him is one of the best things to happen to Dean.

When Bobby Risks His Soul To Save Sam And Dean

In an attempt to get phoenix ash as a weapon against Eve (the mother of all monsters), Castiel sends Sam and Dean back in time to 1861. While Sam is busy reigning in Dean’s excitement about cowboys, Castiel has to deal with an angry angel. Wounded, weakened and unable to retrieve Sam and Dean from the past on his own, Castiel goes to the person that everyone goes to for help: Bobby.

With the fight draining Castiel, Bobby has to put his own soul at risk to help the angel get his powers running again. In a very dangerous gambit that will save his boys from living the rest of their lives in the nineteenth century, Bobby lets Castiel touch his soul who must make sure not to make the hunter explode and together they bring Sam and Dean home.

When Bobby Stops Sam and Dean From Killing Each Other

Sam and Dean are up against a Siren that’s disguising itself as a stripper. While Dean is ecstatic, it doesn’t last long. The Siren ups its game and, like the brothers, pretends to be an FBI agent. With Sam hooked on Demon Blood and acting out, Dean is wooed by the Siren’s brotherly act and is soon under the creature’s spell. And thanks to a poisoned Dean, Sam becomes infected by the Siren’s venom too.

While the show’s two protagonists are unable to do anything rationally, Bobby has to step in and save them both. Unfortunately, that means stabbing Dean in the shoulder to get his infected blood on the bronze dagger needed to kill the monster. Bobby not only saves them and stops them from killing each other, but he was also the one to let them know that they were dealing with a Siren in the first place.

When Bobby Sold His Soul To Save The World

While Sam and Dean look for Pestilence, Bobby is payed a visit by the King of the Crossroads himself. In order to put the Devil back in the box, they need the rings of all four horsemen of the apocalypse but Death is hard to track. In order to track down the final horseman, Crowley makes Bobby an offer to locate him but needs something in return first: Bobby’s soul.

RELATED: 10 Duos In Supernatural Who Should Have Had More Screen Time Together

It is revealed in the penultimate episode of season 5 that Bobby selflessly agreed to this deal. With this deal, Crowley has the ability to find Death in Chicago and even gives the hunter the use of his legs back. Not only are the exchanges between the two of them hilarious but together they help save the world and share a very memorable kiss.

When Bobby Figured Out The Boys Were Hunting A Trickster

In another episode from the early years of Supernatural, Sam and Dean struggle to find a cause for all the weird things happening in town, such as a scientist experimenting on animals who is eaten by an alligator in the sewers, or a frat boy humiliated by being abducted by aliens. It’s a weird one but another reason the boys can’t figure it out is because the two cannot stop bickering.

At each other’s throats, they have to call in Bobby who quickly figures out that they’ve got a Trickster on their hands. Off the top of his head, Bobby knows exactly what they’re dealing with and is surprised that the boys couldn’t see past the Trickster-induced arguments to realize it.

Everything From “Weekend At Bobby’s”

In one of Bobby’s best episodes, he is really put through the wringer and his limits as a hero are tested. Bobby tries to get his soul back from Crowley after pawning it for Death’s location but is constantly interrupted. No matter the issue, Bobby puts his owns wants aside to help hunters, including Sam, Dean and Rufus.

After saving his neighbor, this hero doesn’t get the girl considering he splattered her with monster guts. But at least, everyone’s favorite hero is finally shown a little gratitude when Sam and Dean admit that they don’t know where they’d be without Bobby. He is a true hero and a loving father.

NEXT: 10 Best Supernatural Characters Ranked, According To Ranker

Rebecca Budgen is a queer (biromantic asexual), neurodivergent writer and artist from England. With a BA in Creative Arts and a MA in Creative Writing from Aberystwyth University, Rebecca has had creative nonfiction, mixed media pieces, poetry and reviews published in various magazines and anthologies. Rebecca is a dedicated fan of every conceivable fandom, from Supernatural to Schitt’s Creek.