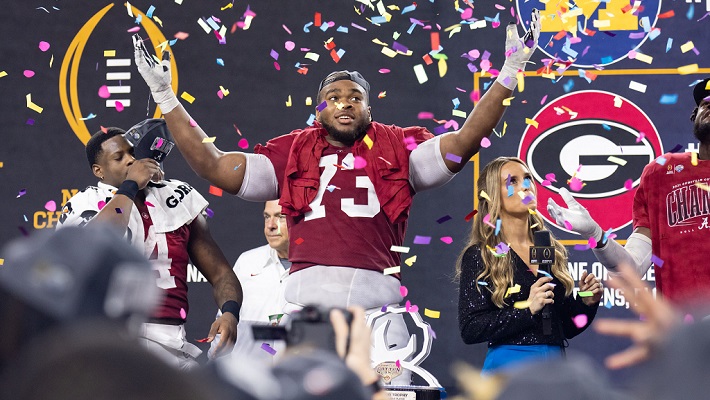 
The offensive line is where football games are won and lost in college football, but despite strong offensive line play being crucial to success, plenty elite athletes who line up in the trenches don’t get recognized. That’s because the average person really only pays attention to the line when a quarterback is being sacked. Evan Neal, a stud lineman out of Alabama, didn’t spend too much time watching his QBs lay on the ground in college.

Since arriving in Tuscaloosa, Neal protected elite signal callers like Tua Tagovailoa, Mac Jones, and 2021 Heisman Trophy winner Bryce Young. Neal started during his freshman year, and while that’s a situation that would overwhelm some, the soon-to-be first-round pick viewed it as an opportunity to grow and quickly mature.

“The thing that I’m most proud of is being a young guy coming in and playing early and having to mature. Being a freshman, being in the situation where you have to perform to the level of a veteran, it kind of forces you to just grow up, and I’m definitely thankful for that experience,” Neal tells UPROXX.

It can be stressful playing at Alabama, as every player thinks he will play on Sundays some day. On top of trying to stay on top of his game, Neal quickly found himself a leader in the locker room. And in his downtime, he found the best way to relax was to chill out and play some Call of Duty.

“For me, [playing Call of Duty and playing football] are two different mindsets,” Neal says. “I like to play video games just for leisure. Even though Call of Duty can be a stressful game, don’t get me wrong, the mindset is definitely different. The competitive fire is still there, I don’t wanna lose, I don’t wanna get killed, but mentally I approach it differently.”

It is interesting listening to him talk about his approach to the game. His overall goal, keep his K/D ratio up and not be a negative to the team, sounds a lot like how a lineman approaches their job: keep the quarterback up, don’t chase highlights, and above all else, do not hurt your team.

“I just try to kill and not be killed,” Neal says. “I’m not the biggest gamer in the world, but I do my best. I don’t really have a strategy, but I just try to keep my K/D ratio up and that’s all I try to do.”

Even if it doesn’t always change the game, a good K/D ration helps the team immensely. Being okay with that is something that is a surprisingly rare trait among the average Call of Duty player. All of this could be unrelated, but it’s hard to not think about how that team-first attitude has helped Neal become the leader he was at Alabama.

Nothing — not football, Call of Duty, nor draft prep — seems to phase Neal. Maybe it’s his personality, or maybe everything is just easier once you’ve gone through the grind of the Alabama football program.

“It definitely helped harden my steel and sharpen my iron, just being in such a competitive environment forces the best out of you,” he says. “So I’m definitely fortunate for Alabama and coach [Nick] Saban for helping me develop my skills as a football player, and not only that, but as a man as well.”

It’s hard imagine a scenario where Neal isn’t spending the next decade-plus playing in the NFL. And when the games are done and he heads back home, he knows he’ll have his favorite game waiting for him, as he told me, “I’m never going to stop playing [Call of Duty]. I go through phases where I just want to play the game, and if it’s there, I’m gonna play it.”