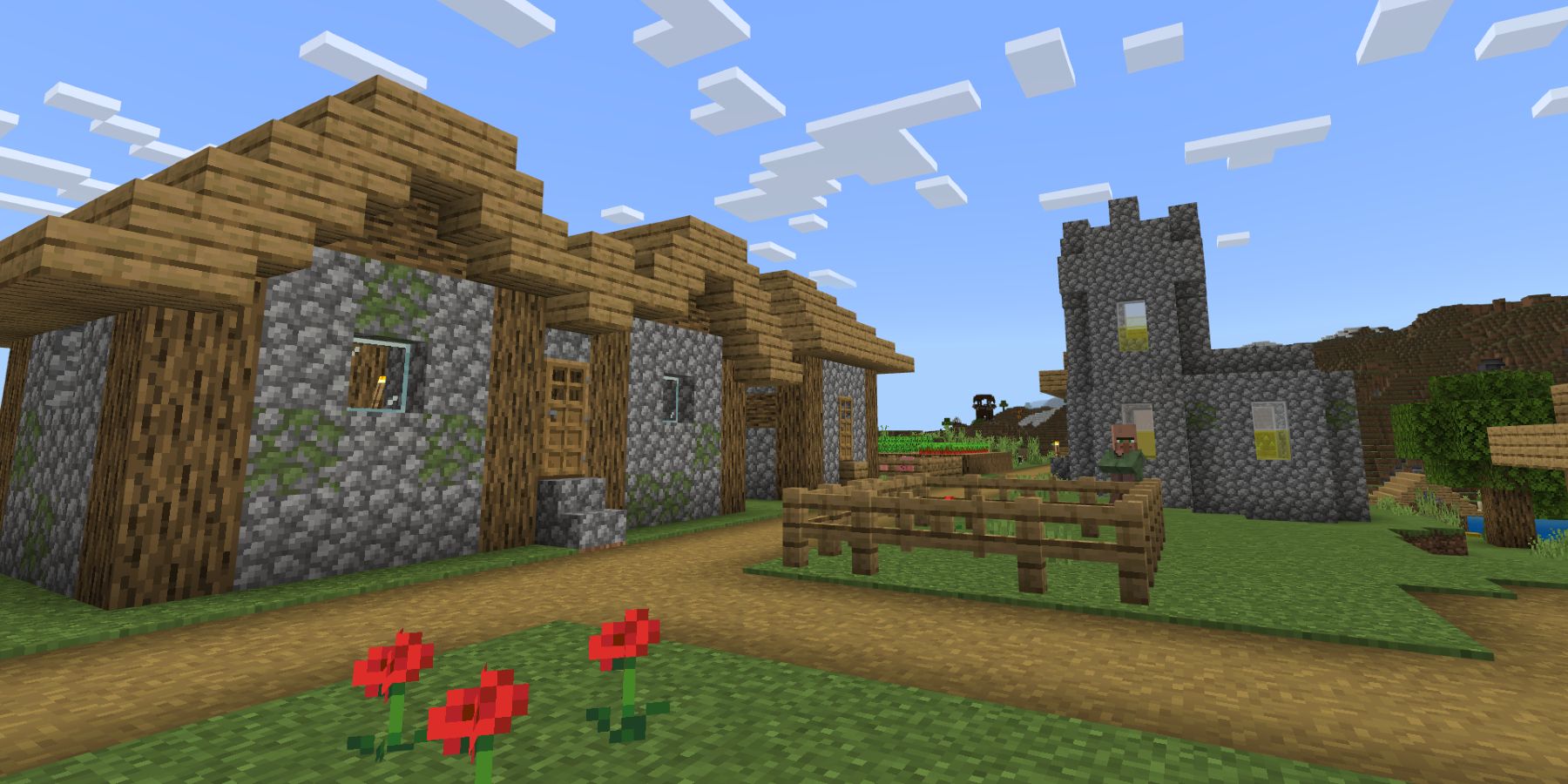 
One of the biggest factors behind the success of Mojang’s sandbox title Minecraft is its player-driven incentive structure. Though every new update adds content to interact with, there is no singular “goal” every user has to complete. There are achievements to unlock with suggested activities, as well as a credits sequence after defeating one of Minecraft‘s few major bosses, the Ender Dragon, but players can ignore these facets of the game if they want to pour their time into building or other intrinsic motivations.

Villages are among the many areas Mojang has developed for fans to sink their teeth into. Players were originally alone in a natural world with peaceful animals as well as aggressive mobs. Then the Adventure Update (Beta version 1.8) in 2011 introduced Villages full of active NPC characters that have expanded over time. Subsequent updates have introduced professions that turn Villages into malleable trading hubs, as well as antagonistic groups like Illagers. However, more could be done to encourage player interactivity with these systems, such as traditional RPG-styled quests that point out interesting content.

What Villages Offer to Minecraft

Minecraft updates like 2019’s Village & Pillage have turned basic Villages strewn about biomes like plains, savannahs, and deserts into locales with interlocking mechanics that can greatly improve players’ experiences. Emeralds were a mineral type added in 2012 that served as the basis for trading, with resources like coal or rotten flesh being exchanged for emeralds and vice versa. Trading has become more sophisticated thanks to updates like Village & Pillage, which added new utility blocks including stonecutters and grindstones that made Villagers tied to certain houses become unique professions.

Now players can settle in a Village and interact with key NPCs, improving their trade levels to unlock valuable items. For example, Librarians can have enchanted books with skills such as Mending. Furthermore, there are ways to “breed” Villagers and get the right professions for rare goods to appear. Villages are also spawning points for mobs like iron golems, cats, and wandering traders with more eclectic natural materials.

Players can improve their experiences further thanks to mechanics like raids. The aforementioned Illager mobs take varying forms, such as crossbow-wielding Pillagers or magic Evokers, and can be found in different structures like outposts and woodland mansions. By defeating a banner-holding captain that spawns in an outpost or out on patrol, players can receive the “Bad Omen” status that triggers a raid when entering any Village. Fending off multiple waves of Illagers and their allies, including the ox-like Ravager and Witch mobs, rewards players with a “Hero” status that lowers trade prices and leads to Villagers throwing out gifts.

While raids help build a sort of relationship between Villagers and Illagers in Minecraft, mechanically they only benefit the prolonged trading aspect of these areas that not every player may be interested in. Short-form content like quests could be a great reason for players to stop by any Village they pass regardless of their intent to settle down. Going too far into the realm of an RPG with a checklist of activities to complete for some grand reward may be outside Minecraft‘s open nature, but quick activities would help in a number of areas.

For one, Village quests could add more utility to every profession, including ones that players often overlook. Every Villager begins “unemployed,” but without a job site block they can become “Nitwits” – mechanically useless, as they cannot trade or perform duties like farming and are unable to switch jobs. If Nitwits could hand out short-term activities for the player and reward them with an item at the end, akin to tossing Hero players something after raids, there would be less incentive to act like eugenicist.

The design of these quests could also encourage players to interact with their surroundings in way they might not have known about otherwise. For example, a Village spawning near a Pillager Outpost could have citizens directing the player to clear out that nearby nuisance. Other quests could be soft tutorials for mechanics like beekeeping, asking the player to bring items like honey in exchange for emeralds or improved standing with every Villager. Long-time fans could ignore these quests unless they want the extra items, but ultimately the idea would add more Village activities that engage – and possibly help teach – Minecraft fans.

Minecraft is available now for PC, PS4, Switch, and Xbox One.


Kevin Feige Shared His Thoughts On Marvel Leaks And Spoilers

Jason learned to read playing Pokemon Crystal on the Game Boy Color, and hasn’t looked back. He received a Journalism degree at California State University, Fullerton while working on news coverage and investigative content for its paper, and came to Game Rant soon after graduating. Nintendo games are his primary wheelhouse, but he’ll try most anything once.