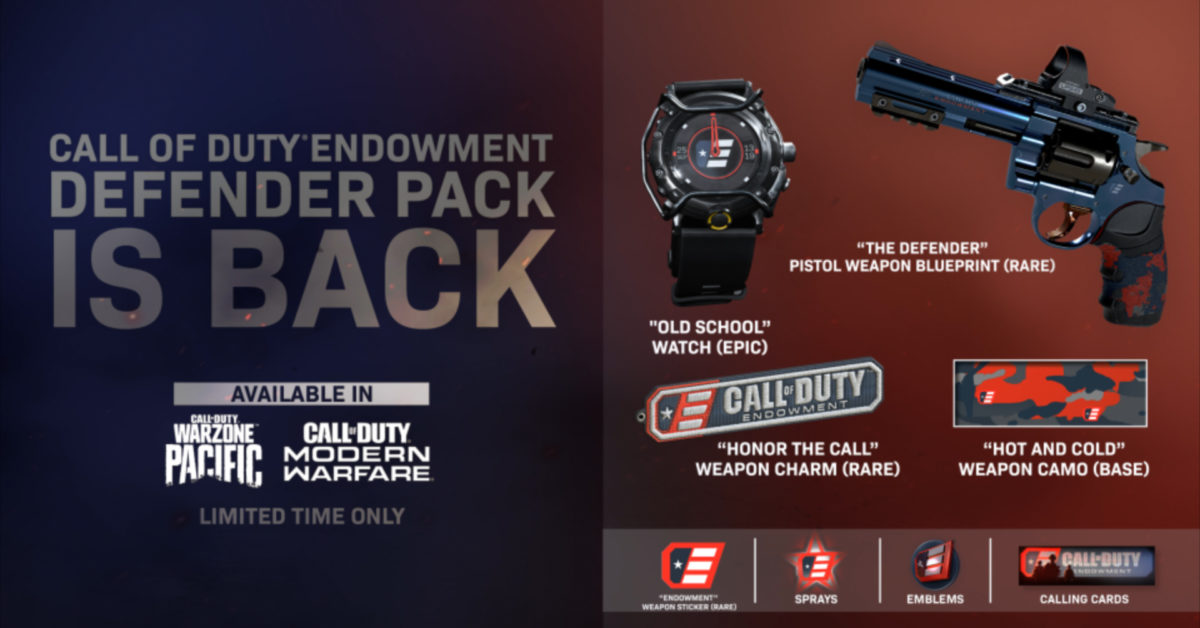 
The Call Of Duty Endowment is celebrating a special milestone this week as they’ve released a new pack into both Warzone and Modern Warfare. The organization reached its goal of placing 100,000 veterans into meaningful employment and did so two years ahead of their projected schedule. Which, if you’re not entirely aware, finding veterans jobs who have just left the military only a couple of years ago is a challenge in America. Activision Blizzard also vowed to commit $30 million in additional funding to support the program for the next five years. As part of the milestone, they have released this new limited-time pack of content into the game, which they’ve done in the past, with all proceeds going to the Endowment. We have a couple of quotes below from the announcement.

“To put 100,000 placements in perspective, the entire active-duty Marine Corps is made up of more than 178,000 people,” said General James Jones, USMC (retired), 32nd Commandant of the United States Marine Corps and Co-Chair of the Call of Duty Endowment. “While reaching 100,000 placements two years earlier than our goal is an accomplishment to be proud of, there is much, much more we can and should be doing to support our veteran community as they transition to civilian employment.”

“As we recover from the pandemic, there are great opportunities but even greater challenges present in the labor market. Veterans need assistance more than ever,” said Dan Goldenberg, Executive Director of the Call of Duty Endowment and Vice President of Corporate Social Responsibility at Activision Blizzard. “We are pleased to make a difference in getting veterans placed into meaningful employment, but also realize that we have so much more to do.”

“The Call of Duty Endowment’s financial and moral support has not only been essential for VetJobs’ mission, having funded more than 48,000 of our 77,000 placements, but also in driving accountability to higher standards across not-for-profit veteran employment initiatives,” said ​​Rear Admiral Dan Kloeppel, U.S. Navy (retired), CEO of VetJobs. “There is no better, more supportive resource for veteran job placement than the Call of Duty Endowment.”