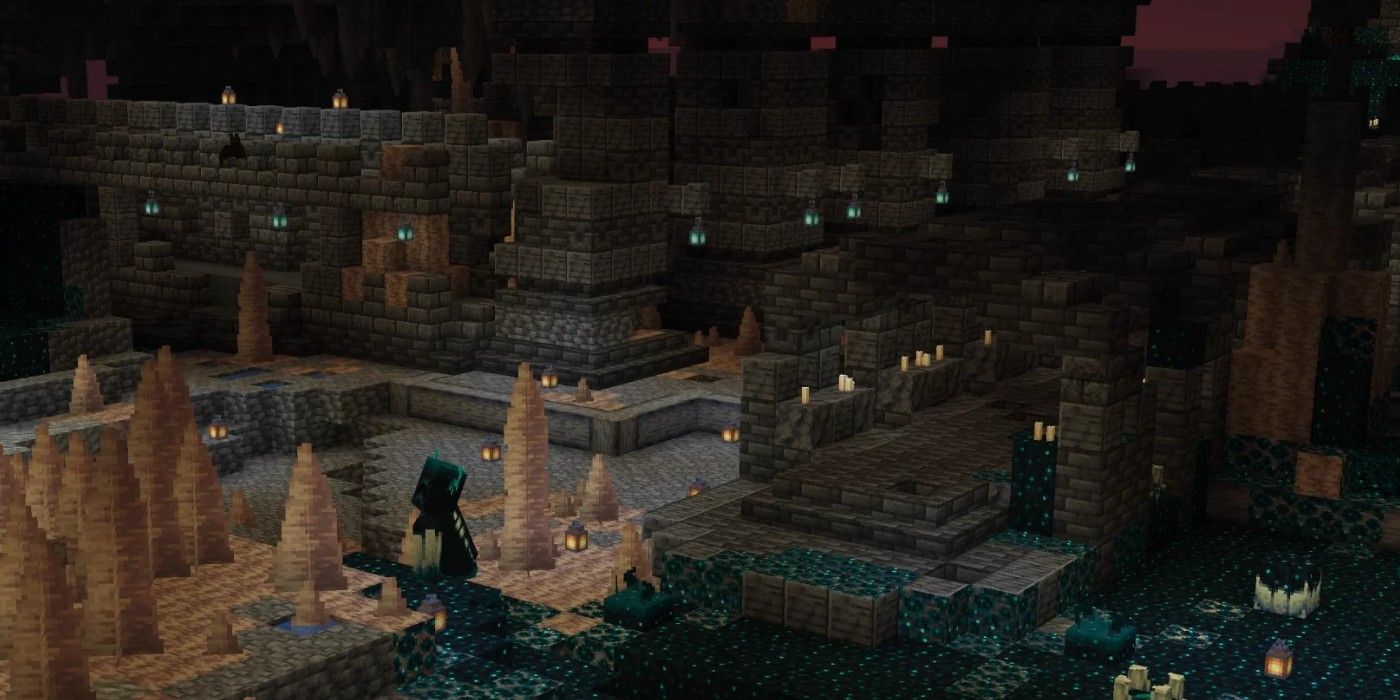 
Minecraft’s new music disc dropping in the upcoming Wild Update may shed some new light into the origins of the Warden and history of The Deep Dark.

Minecraft has been one of few games to withstand the test of time, with it focusing mostly on content while ensuring that the world remains mysterious, though the new music disc in the Minecraft 1.19 Wild Update gives some insight as to the origins of The Deep Dark biome and the Warden. With Minecraft dropping back in 2009 and gaining a dedicated community along the way, the lore of the world and its creatures has been picked apart and theorized often. With the upcoming Wild Update, players will have the opportunity to dive into the new alien-looking Deep Dark biome and discover the many secrets it holds, though its exclusive music disc found in Ancient Cities may shed some light as to how the sculk spread throughout the biome and what Minecraft‘s Warden enemy protects with its terrifying lasers.

Minecraft‘s music discs have always been one of those items that feel like a reward since they are rare to find within the world and are a nice addition to listen to while sitting around a home. This changed back in the Nether update, which added a new music disc called, “Pigstep.” This disc is located exclusively in Bastion Remnants, home of the Piglins, which makes it uniquely tied to one location and adds lore to the Piglins by giving them their own disc as if they listen to it when the player isn’t around. The Ancient Cities in the Deep Dark biome will contain fragments of a new music disc, along with a new Minecraft item to guide players where they died last, but locating all of the fragments will grant a disc that sounds more like a found-footage tape than something to jam out to.

Related: What Frogs Eat In Minecraft

Years ago, another music disc titled “11” was added to Minecraft that plays out in a similar way, with this one detailing another player’s last moments, sounding like a scared person running away while a strange creature hunts them down. The upcoming music disc that is being added to Ancient Cities follows a similar naming scheme and is labeled as, “5”. However, unlike the other disc, many of the sounds in this recording can be directly tied to the sculk and the Warden, which could help in determining their origins in Minecraft 1.19.

What Minecraft’s New Music Disc Reveals About The Deep Dark

After avoiding Minecraft‘s Warden and its scary darkness effect, and locating nine disc fragments throughout Ancient Cities, the player can craft them into a completed music disc and play it in a jukebox. The recording lasts for roughly three minutes and plays out in spliced sections like it was damaged from being split apart. Throughout the recording, there are many noises that are without question tied to the sculk sensor and the Warden. Toward the end of the recording, a person can be heard running down what sounds like a corridor, which correlates to the main walkway that leads to the monument in the center of the Ancient City. Afterward, a sharp crystal-like sound can be heard, similar to Minecraft‘s End Crystals which Wardens can survive, and an ignition sound is triggered as if something massive had just been lit, which ties into player theories that the monument in the Ancient City is actually a portal to another dimension.

Shortly after, the person in the recording triggers what sounds like a sculk catalyst, which is the block that summons the Warden. Afterward, a sculk sensor is set off, followed by the booming roar of the Warden. After listening to the recording and examining the environment of the Ancient City, it can be inferred that this explorer could have lit a portal to a sculk dimension and brought it over into the overworld, along with Minecraft‘s Warden mob which is the scariest in the game. Whatever actually happened may remain a mystery, but the community will always try piecing together the true meaning and discover the origins of The Deep Dark. Minecraft‘s 1.19 Wild Update releases later this year and brings over a whole host of new biomes, creatures, and items to explore and utilize.

The Reason For WWE Releasing Dakota Kai Is Now Clear

Nicholas Kincheloe has been writing for many years and has also been involved in film writing and editing. He spends his downtime playing through his backlog of games and writing stories.