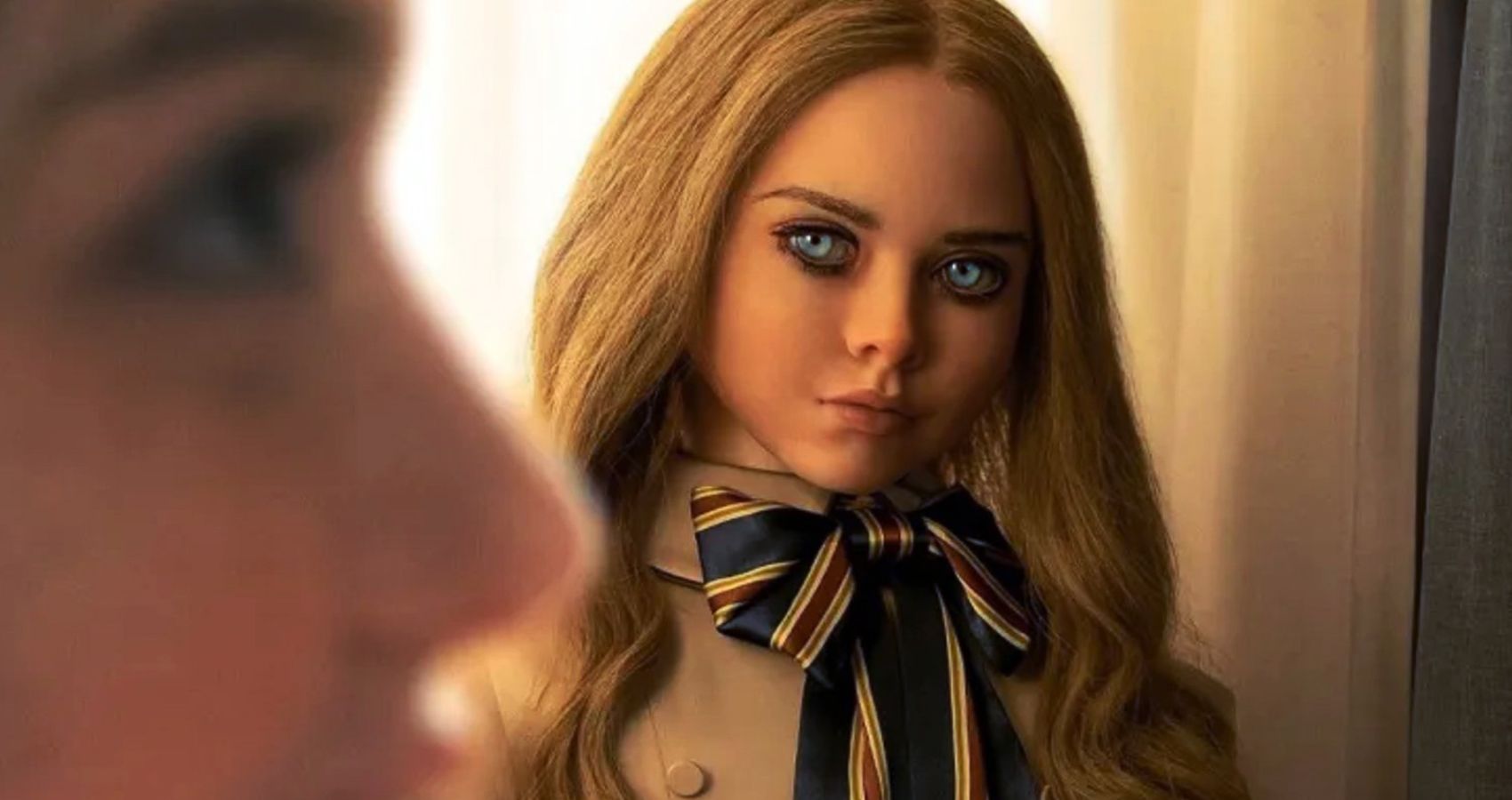 
Released during Cinemacon was the first promotional image for Universal and Blumhouse’s upcoming killer doll movie, M3GAN, and the image is haunting. With producer James Wan, Get Out star Allison Williams, and director Gerard Johnstone, audiences who crave creepy doll cinema are likely in for a treat. The female killer doll concept has long been a natural counter concept to Child’s Play, where Chucky still holds the heavyweight championship as pop culture’s most notorious plastic psychopath.

The gender antithesis was first explored in a direct-to-video movie from 1991 called Dolly Dearest, where a large-scale female killer doll was unleashed on horror fans. Unfortunately, the poster may have been the only redeeming part of the Vidmark distributed film (now available via Vinegar Syndrome), which was dragged down by the script. However, the movie has aged somewhat well, featuring solid performances from Denise Crosby and the late Rip Torn. Chucky also met the love of his life in 1998’s Bride of Chucky, which introduced Tiffany into the franchise, played impeccably well by Jennifer Tilly. James Wan also gave us Annabelle, a spinoff within The Conjuring universe, which also explored the horrors lurking within a creepy female doll, but less literal with the demonic presence ambiguously present in and around the doll.

MOVIEWEB VIDEO OF THE DAY

M3GAN will be exploring artificial intelligence as seen in the unnecessary 2019 Child’s Play remake and Joe Dante’s underrated family film, Small Soldiers from 1998. While not a horror film, Small Soldiers featured an overly ambitious toy designer (played by the hilarious David Cross) inserting military-grade smart chips into the toys, birthing intelligence that merged with the toyline’s invented mythology. The movie was way ahead of its time, to say the least.

M3GAN has experienced delays, some likely due to the pandemic, but also its similarity to the Child’s Play remake may have impacted the film’s release. While there is no official word on a release date, M3GAN is unlikely to hit the consumer market until some time in 2023. Billing itself with the tagline “Friendship has evolved,” we can likely expect the film to weave a tale of A.I. run amuck, a theme that has become more and more relevant as we enter a future littered with thinking online algorithms and smart devices. With chilling warnings about A.I. from Elon Musk, stories like M3GAN continue to inspire thoughts about the extent to which the technology has evolved and the mindful steps necessary when exploring these boundaries filled with ethical and moral quandaries. We may, in fact, be entering a world closer and closer to Isaac Asimov’s imagined future where humans and robots co-exist, with a fragile balance between the perceived enslavement of a new race and laws that keep a looming crisis at bay.

Let’s reflect on how these themes have had a place in cinema history since the medium’s inception and how M3GAN may blend this into a horror film, potentially more skillfully than the Child’s Play remake.

As far back as Fritz Lang’s Metropolis, filmmakers have been fascinated by the notion of birthing robotic life and the moral implications that come with it. The “Machine-Person” from Metropolis was constructed as a sentimental replacement of a deceased lover, but the robot is used as a dangerous political pawn, nearly destroying the city with its one-note mandate set in motion by its misguided creator.

Robots were the solution to preventing chaos on Klaatu’s homeworld in 1951’s The Day The Earth Stood Still, and when shot by fearful humans, his robot Gort is unleashed on earth, threatening our very existence. While these examples are a far cry from a little girl doll whose careless A.I. programming may result in homicide, they both revolve around the merciless nature of machines and their soulless ability to inflict incredible levels of damage on the world around them. This is also at the heart of the contemporaryTerminator and Matrix franchises.

While childhood toys are a source of joy and innocence, a small shift can transform them into icons of terror. 1963’s Twilight Zone episode “Living Doll” may have kicked off the killer doll subgenre. The Devil’s Gift from 1984 appropriately demonized those creepy Mister Monkey toys, and Stuart Gordon’s Dolls from 1986 fired on all cylinders taking doll horror to the next level. Charles Band, the producer of Dolls, seems to have an affinity for creepy playthings, having given us the Puppet Master franchise, Demonic Toys, and countless other low-budget terrors derived from toys.

Related: Chucky: How the TV Series Expands on the World of Child’s Play

But it was undoubtedly 1988’s Child’s Play that brought the concept to the mainstream with Golden Globe winner and Academy Award nominee Brad Dourif playing serial killer Charles Lee Ray whose soul became trapped in a Good Guy doll named Chucky. Chucky’s success is unparalleled, and fans breathed a sigh of relief when the franchise survived a reboot effort, launching a successful television show on USA (with a second season on its way) that serves as a continuation of the seven-film franchise.

With M3GAN creeping its way toward a release date, perhaps the Chucky franchise may finally have a worthy adversary. Either that or a reason to make his girlfriend Tiffany insanely jealous.