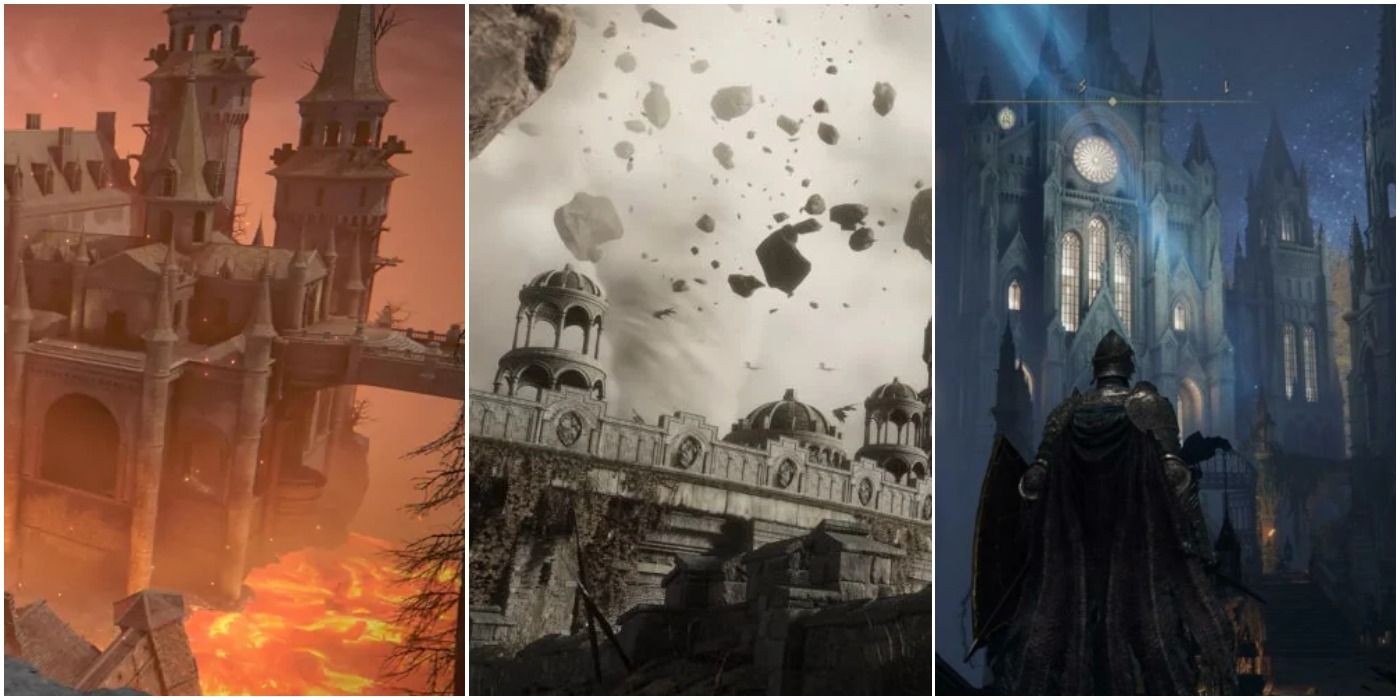 
Much of Elden Ring is open-world, giving the player vast spaces to explore and uncover secrets, all alongside numerous small dungeons consisting of a handful of rooms. ‘Legacy Dungeons’ are the large, enclosed regions that hearken back to the gameplay of Dark Souls or Bloodborne, which force the player through an interconnected linear environment.

RELATED: Elden Ring: Areas You Won’t Want To Miss (& How To Find Them)

Often full of challenging enemies and capped with challenging bosses, alongside having limited Sites of Grace and opportunities for replenishing Flasks, Legacy Dungeons tend to be tests of skill and endurance. Many of them are considered highlights of the game and some of its tightest design, but others are less popular.

6 The Haligtree Is Stuffed Full Of Hard Foes

The Haligtree is the game’s bonus dungeon and isn’t required for completion. Reaching it requires completing a game-spanning quest to recover both halves of the Secret Haligtree Medallion, and then for the player to fight their way through the brutal Consecrated Snowfield. Once there, things don’t get any easier.

As an optional and deliberately-difficult dungeon, the Haligtree is the game’s hardest area. It’s split into two parts: the Haligtree itself, stuffed full of hard-hitting enemies fought on narrow ledges and branches, and the city Elphael: patrolled by vicious Cleanrot Knights. Many Elden Ring fans appreciate a challenge, but a great many found the Haligtree a step too far, and simply unfair and no fun.

Liurnia of the Lakes is one of the largest and most sprawling regions in Elden Ring, and at its very center is the grandiose magical academy of Raya Lucaria. One of the centers of power in Liurnia, it currently contains the trapped Queen Rennala of the Full Moon, whose Great Rune the Tarnished may need to reach Leyndell.

Raya Lucaria isn’t disliked by many players, but there are few who consider it their favorite dungeon. It’s a bit bland, and most of its challenge comes from frustrating range enemies. It also mostly consists of outdoor spaces rather than the sprawling corridors and classrooms players may have hoped for. As such, players tend to consider Raya Lucaria a passable dungeon, but not the game’s best.

The first true Legacy Dungeon players are likely to encounter, Stormveil Castle sits on the boundaries of Limgrave and is home to Godrick the Grafted, the merest of the Lands Between’s demigods. Despite this, it’s more than a fitting challenge for a low-level Tarnished, presenting one of the earliest serious obstacles to a player.

Stormveil Castle is absolutely huge, with a number of pathways, passages, rooftops, courtyards, buildings, and more a player can explore. Every inch of it is packed with enemies, but not enough to simply overwhelm careful players. With a good level of variety to them and a number of ways to approach it, Stormveil is a suitable introduction to the game’s later Legacy Dungeons, and an area players look back on fondly.

3 Volcano Manor Is A Gripping Side Challenge

The area of Mt. Gelmir is presented as something of an afterthought to the Altus Plateau – the region it shares a geographic region with. The plateau is central to the plot. It’s required to reach the game’s third act and the player’s goal for much of the game. Mt. Gelmir is connected to a mere side plot related to Rykard: the Lord of Blasphemy.

Nonetheless, when the player reaches the dungeon section of Volcano Manor, it’s one of the more fun and frantic areas in the game. Surrounded by lava and with dangerous enemies like Abductor Virgins scattered around, Volcano Manor is a tense and fun dangerous dungeon capped off by two boss fights: one against the Godskin Noble and another against Rykard himself.

The third act of Elden Ring is controversial compared to the beloved earlier parts of the game. Players cite the heavy reuse of assets, enemies, and a stream of overly-punishing bosses. However, one area that largely escapes this ire is Crumbling Farum Azula. The player reaches it after burning the Erdtree and fights to recover the Rune of Death from Maliketh: Queen Marika’s shadow.

The area is undeniably challenging, even with its basic Beastman enemies only being as powerful as early-game bosses, and also having several dragons, wormfaces, and Banished Knights dotted around. Nonetheless, the region is never unfair. For its striking visual aesthetic, its fun and balanced challenge, and its gripping final boss fight, many players consider Farum Azula the best part of the game’s final hours.

For the first two acts of the game, the player’s stated mission is to fight their way through Leyndell, the Royal Capital, and reach the Erdtree at its center. Requiring two Great Runes to enter, the Royal Capital proves more than a fitting capstone to the best parts of Elden Ring.

In comparison to the more regular-sized ‘city’ dungeons of games like Dark Souls, Leyndell is utterly enormous with a great many hours of content in and of itself. It’s huge, winding, and sprawling, with an untold number of routes through its streets and buildings. Its Sites of Grace are carefully placed around to test the player’s resources to their maximum, and it has several shortcuts and paths to make navigation easier. With entertaining enemies and bosses throughout and baskets of loot, Leyndell is a beloved dungeon in Elden Ring.

Isaac Williams is a movie-goer, TV watcher, journalist, blogger, gamer, comic book-fan, and roleplayer. He’s been a bartender and a waiter, and now he writes lists for CBR. He focuses on TV shows and movies. In his free time, Isaac can be found gaming, reading, playing D&D, walking Birmingham’s lengthy canals, and catching up on movies.