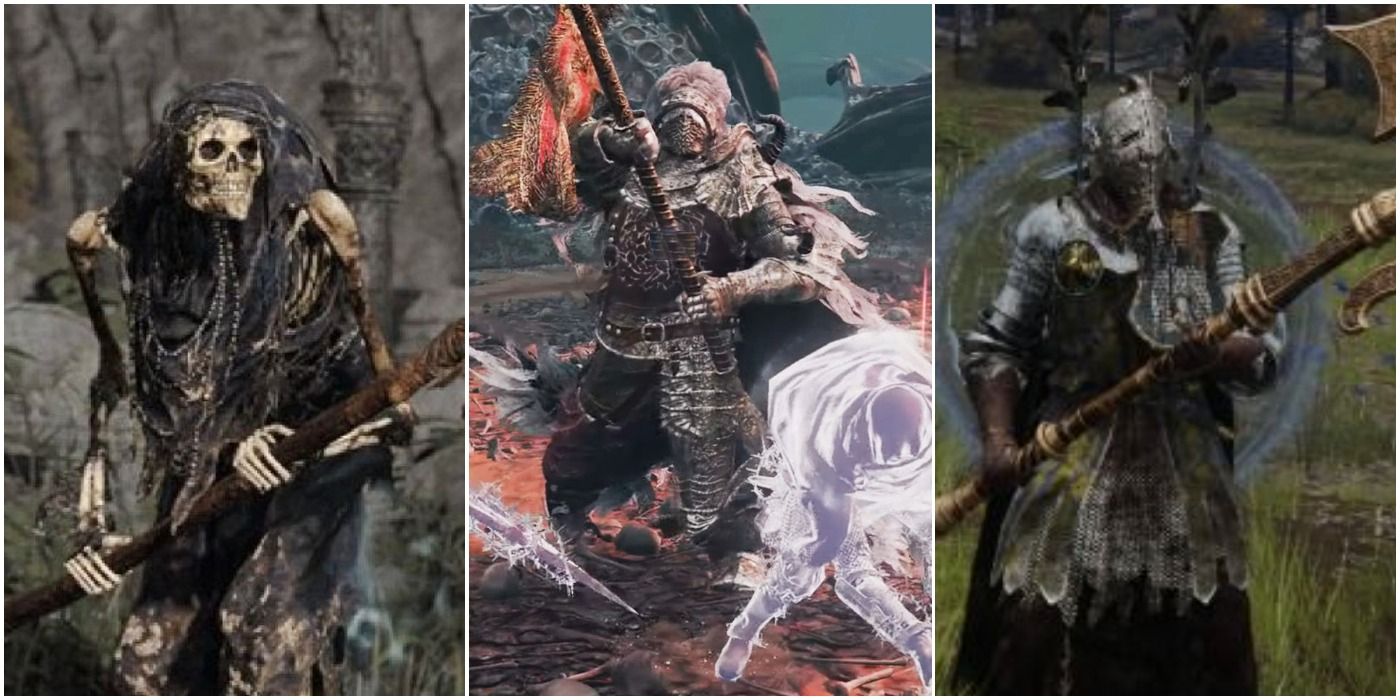 
As the success of Elden Ring swells in the months following its release, the game’s players continue to dissect and analyze the variety of weapons available for use. Two weapon classes, in particular, do not get as much appreciation as they perhaps deserve, especially considering their innate range and versatility: Halberds and Reapers.

RELATED: 10 Weapons In Elden Ring You Should Upgrade Right Away

Since quality instances of these weapon types can be found in early, middle, and late-game areas, Halberds and Reapers offer significant upside for anybody looking to poke-and-prod while maintaining their distance. While most of the options in these categories are all capable of carving through hordes of the Elden Ring‘s notoriously difficult enemies, a few select choices stand above the rest.

10 The Vulgar Militia Saw Is A Bloody Nuisance For Enemies

The Vulgar Militia may be scattered across Elden Ring‘s landscape, but the Vulgar Militia Saw only drops from the group’s members that are located directly next to the Bestial Sanctum. A jagged saw attached to a long, metal arm, the design of this item speaks to the tiny Militiamen’s need for ranged combat.

This weapon deals some substantial bleed damage, and given that this status effect is one of the most devastating in Elden Ring, it more than makes up for the Halberd’s mediocre scaling. When coupled with its range, these aspects make this Halberd a solid option for melee-oriented players.

Obtained as a fairly rare drop from the Skeleton Mages encountered in Elden Ring‘s dungeons, the Grave Scythe is a perfect option for those looking to sow fear across the Lands Between. Featuring solid physical damage, this weapon and its ability to ignore large amounts of block negation (upwards of 40 percent, depending on attack type) make it a formidable option for Tarnished and Skeleton alike.

Another weapon notable for its bleed effect, the Grave Scythe (the heaviest scythe found in Elden Ring) tends to be a better option for Dexterity and Strength builds than those leveling in other attributes, especially when considering that the scythe also raises player Vitality by 35 points.

8 Commander’s Standard Opts Out Of The Standard Halberd-Moveset

The Commander’s Standard, dropped after defeating Commander O’Neil (found in the Aeonia Swamp), scales well with Strength, decently with Dexterity, and presents as a fantastic option for pure Strength Builds looking to expand their range.

One aspect of the Commander’s Standard that separates it from other weapons in this class is its unique moveset; whereas most Halberds perform short, choppy, slashing attacks, the Commander’s Standard instead utilizes stabbing attacks. This, coupled with the weapon’s ability to raise the player and nearby allies’ damage by 20 percent, make for an oddity in its weapon class.

Players looking to obtain the Golem’s Halberd should be prepared for an opponent matching this Colossal Weapon’s size, as they only drop from Halberd-wielding Golems found throughout the Lands Between (the earliest accessible version being those on the path to the Divine Tower of Limgrave).

Capable of scaling up to an A in Strength and a B in Dexterity, this item is capable of dealing out monstrous physical damage rivaling that of Elden Ring‘s best weapons. Although it doesn’t have a unique weapon skill, this does leave the Golem’s Halberd infusible with Ashes of War, greatly adding to its versatility and long-term viability.

A solid mid-game option for Elden Ring fans, the Dragon’s Halberd is particularly worth acquiring for players primarily utilizing a Dexterity-based build. To obtain this item, the Tarnished must defeat the Dragonkin Soldier boss located in the Siofra River area, which is no small feat for unprepared challengers.

Despite being somewhat challenging to acquire, this item’s unique version of its skill, Spinning Slash, easily makes the challenge worth the effort, and that goes without mentioning its above-average scaling in Dexterity and Strength. Although the Halberd’s weapon skill appears visually identical to the normal version, when used on Dragon’s Halberd, it deals additional frost and lightning build-up for 20 seconds.

5 Loretta’s War Sickle Succeeds Due To Its Versatility

Were Loretta’s War Sickle not found in one of Elden Ring‘s extreme late-game areas, it would be one of the premiere staples that players carry throughout their journey to the Elden Throne. Dropped by the iconic knight Loretta (the corporeal version of the Haligtree, not the apparition found in Caria Manor), this Halberd dropped its blue glintstone in favor of Miquella’s unalloyed gold, symbolizing the knight’s shift of allegiances.

Featuring C scaling in three separate stats, Loretta’s War Sickle appeals to a variety of different builds and play styles without sacrificing any of its raw damage output. If that wasn’t enough to solidify it as an appealing option for melee-oriented Tarnished, its devastating unique ability certainly qualifies it as such.

Gargoyle’s Black Halberd is obtainable from early on in Elden Ring, but the Tarnished should be prepared for a very difficult battle if they’ve yet to reach the mid-point of the game’s narrative. Wielded by the Black Blade Kindred located outside of Caelid’s Bestial Sanctum, this item is appropriately intimidating for a servant of Maliketh.

What makes this weapon exceptionally powerful isn’t its weapon scaling (which is, admittedly, average), but instead the massive amount of holy damage that it dishes out every single hit. When upgraded to +10, the Gargoyle’s Black Halberd is capable of quickly dispatching some of Elden Ring‘s toughest enemies.

Despite how difficult navigating the Scarlet Rot-afflicted lands of Caelid proves to be, players would be wise to pursue the best weapon dropped by the Scarlet Knights located in the Swamp of Aeonia: the Halo Scythe.

One of the Reaper class’ best weapons, this item inflicts notable physical and holy damage, yields decent blood loss, and features more range than almost any other halberd or reaper, thanks to its gorgeous weapon skill, Miquella’s Ring of Light. Developed by the beloved son of Marika, this ability launches horizontal wheels of light that shred through any opposition they come into contact with.

2 The Winged Scythe Is A PVP Nightmare

The Winged Scythe is a rarity in Elden Ring, as the Tarnished doesn’t need to defeat a boss, reach a late-game area, or burn a Stonesword Key to obtain what is undeniably one of the game’s best overall weapons. Featuring huge amounts of holy damage with decent scaling and blood loss, this item is lootable from a chest found in the Weeping Peninsula’s Tombsward Ruins.

RELATED: 9 Tips On How To Beat Malenia In Elden Ring

Any players interested in the game’s PVP element would be wise to check this weapon out, as its skill prevents enemy Tarnished from using their Flask of Crimson Tears, making the Winged Scythe a force to be reckoned with in online gameplay.

A fan favorite that many players carry until the end of the game, the only drawback of using this weapon is its lackluster weapon skill. Considering its scaling, spread across Strength, Dexterity, Faith, and astronomical base damage, the Golden Halberd is an easy choice for the best Halberd in Elden Ring.