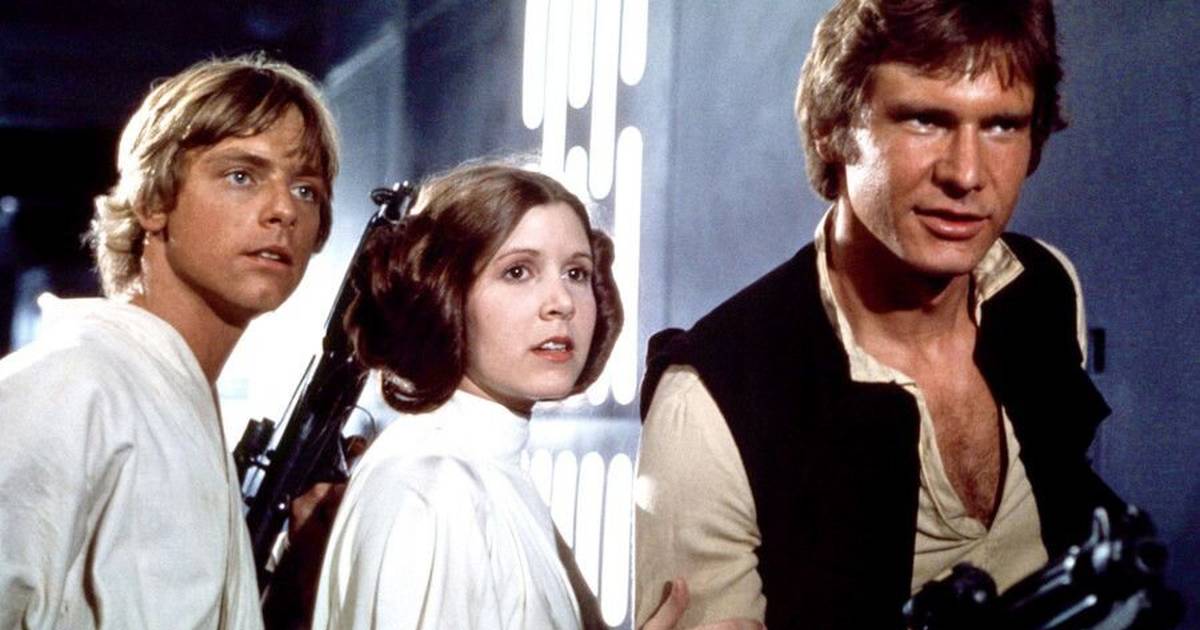 
Star Wars saved my life—from a certain point of view, as Obi-Wan Kenobi would say.

As a kid, I was steeped in George Lucas’ galaxy far, far away. I scoured thrift stores for Star Wars action figures, amassed mountains of Marvel and Dark Horse comics, and even made my own Boba and Jango Fett costumes out of cardboard (luckily, my dad had some silver paint on hand).

Yet in quarantine, Star Wars took on new meaning. The ninth film, The Rise of Skywalker, was released on home video in 2020, and I spent much of the pandemic binging the entire series. The saga was a source of laughter, comfort and hope, making an ever-shrinking world feel just a little bit bigger and brighter.

During that time, Josh O’Rourke—who I’ve known since our days in the trenches of the University of Oregon’s graduate journalism program—invited me to join him on his Star Wars podcast, Bespin Ice Cream Stand. (If you want to understand the name, watch The Empire Strikes Back closely. Really closely.)

Recently, we re-teamed to debate which Star Wars film is superior, A New Hope (1977) or The Empire Strikes Back (1980). Josh argued for the former and I argued for the latter, kicking off an impassioned discussion.

It’s appropriate that our battle of words and wills took place as A New Hope celebrated its 45th anniversary—it’s hard to find a Star Wars fan who isn’t looking for a fight. But the showdown didn’t play out the way you might expect.

At times, we found ourselves playing devil’s advocate, undermining our own arguments, and practically switching sides (how very Darth Vader/Kylo Ren of us). And more importantly, we used Star Wars as a gateway to broader exchanges about friendship, love and loss. We worship Lucas’ creation, but apparently, we don’t want to live for it.

Below is an edited version of our conversation.

Bennett Campbell Ferguson: The notion that you can convince someone is crazy. Film is a visceral artform—you can’t tell someone they didn’t have the experience they had. Which is why the fun of something like this is just to talk about it.

Josh O’Rourke: It’s like that 12 Monkeys quote: “Like the past, the movie never changes. It can’t change. But every time you see it, it seems different because you’re different. You see different things.” All of that said, of course I’m not going to change your mind. But A New Hope is better.

Ferguson: What do you think the mission statement is? I think A New Hope is very, very deliberately designed to reflect a certain state of mind. And I think the overall narrative of the movie is reflecting Luke’s outlook: “Empire bad, Rebels good.” The galaxy looks that way because that’s how he sees the galaxy.

I think if you’re getting into Empire, it’s illustrating when you get older…you’re questioning everything. The story [Luke] has about who his father is—and therefore who he is—is being challenged. And then on top of all that, it’s happening to the other characters too.

Han gets domesticated by the Rebellion pretty quickly, whereas Lando is a much harder figure to get a hold on. He redeems himself—not only that, but he gives up his business and saves the entirety of Cloud City by warning that the Empire is taking over, and in a weird way, becomes the most heroic character in the film [despite having betrayed Han].

O’Rourke: Maybe this is negating my argument, but I feel like A New Hope doesn’t really do the sequels any favors. It’s such a mythology-based, Joseph Campbell-based, in some ways formulaic [film] if you strip it down to its essence.

Ferguson: Even movies that are trying to subvert Joseph Campbell’s research, and his theories about mythic archetypes, end up playing exactly into it. I have a good friend who was talking about Blade Runner 2049, saying, “Oh yeah, that movie subverts that whole hero’s journey thing.” If you actually look at the screenplay and the [story] beats…you can map it to the hero’s journey.

But didn’t A New Hope kind of need to be formulaic so the other films could react against that?

O’Rourke: No, not exactly. Because then you’re just trying to differentiate it as, “[A New Hope] is the simple one and [The Empire Strikes Back] is the dark one.”

Ferguson: But if you poke around beneath the surface, I feel like it’s more complicated, isn’t it? Look at what’s being dealt with in A New Hope—this young kid torn between duty and destiny, and dreaming of another life, even though he has these responsibilities at home on the farm. And then the Empire comes in and takes away what little he has. He comes home to find the home he grew up in up in smoke and his aunt and uncle have been tortured to death.

That’s why I think the formulaic triumph of good over evil with the Death Star blowing up has so much resonance. Because there is so much darkness and there is so much loss that even though we know intellectually that good is going to win, there’s a part of us that doesn’t believe those torpedoes are going to find their mark. And that’s the power of the filmmaking.

I feel like to fulfill our clickbait-y premise, I should say something in defense of Empire. Empire is the darker film, and yet perversely, it’s the one that I feel is more hopeful.

O’Rourke: But is that in the context of knowing Return of the Jedi is next and what happens?

Ferguson: No, I don’t think so. I love the look on Mark Hamill’s face at the end [of The Empire Strikes Back]. He’s so broken. All of [Luke’s] illusions about who he was and his place in the universe have been destroyed, and yet there’s this calm expression on his face: “Bring it on. We may have lost the battle, I’ve lost my innocence, but we’re still here. We’re still standing.” And even though that’s less of a victory on the surface, in a way it feels like more of a victory, to survive everything that happens in Empire. I know I’m just fixating on one scene, but I feel like it’s a symbol of the whole thing.

O’Rourke: I want to go back to what you asked me a while ago, which is, “What is the mission statement of A New Hope?” I think the movie is about optimism—or hope, if you want to get cheesy with it. But it is the idea of someone having all this opportunity and all they have to do is take that first step. It says it all in the Twin Suns scene. [Luke] is just like, “What am I doing with my life?”

It just speaks to me. As a kid, I grew up in a small town. I might have wanted to get away—and I did eventually, but not just because I decided one day, “I’m going to get out of here.” It was all these little micro moments and wizards and droids—I mean that, literally, of course—that had to be in my life, [along with] friends and family and circumstances that made me decide what side of the Rebels versus the Empire I was on.

Ferguson: I’ve always been insulted by people who say, “Oh, Star Wars is just for 12-year-olds.” I think the great thing about Star Wars is that the ideas and the emotions can guide you throughout your life. I don’t want to say it’s about growing up because I feel I’m still going through the journey Luke goes through, you know? Every time I think I’ve got [life] figured out and I’m like, “Aha! Yes, the world is more complex than I thought it was,” I feel like there’s a new “No—I am your father” revelation that causes me to be like, “Ben, why didn’t you tell me the truth?!”

O’Rourke: That’s the funny thing about something that you watch when you’re a kid. And there are plenty of movies—Disney or Don Bluth—or maybe Nintendo’s the biggest thing for me. I feel like all of my life has been—and I think this is true of a lot of people—chasing my childhood and what was missing. And I wonder how that fits in with Star Wars, too.

Ferguson: As much as I’m drawn to Luke’s journey emotionally, there are other journeys that characters go on in my favorite movies that I think I connect to more—and more reflect what I am chasing that was missing in my childhood. And what was missing was that I didn’t connect to as many people as I wanted to. I wanted to give more and receive more than I was getting. My soul wasn’t as fulfilled as it could have been.

And so I feel like I’m always trying to make up for that and trying to reach out to people in whatever way I can—and trying to still overcome my shyness and still overcome the part of me that wants to just hunker in my apartment and have everything my own way. So that’s why I relate less to Luke than a character like Tobey Maguire’s Peter Parker, whose whole journey is about learning when to take off the mask so people can see him for who he really is.

O’Rourke: Despite Star Wars being my favorite movie and one of the reasons I wanted to get into filmmaking and film criticism and writing in the first place, I don’t like it nearly as much as people think I do. It’s important and I have Star Wars toys and posters in my office, but it doesn’t lead me on a day-to-day basis. It’s definitely not my religion, but it’s been a good friend who’s been along with me on this journey of life.

Having said all that I’ve said about Star Wars…it still is too damn important. I’ve talked about this on the podcast before, but I had a friend who passed away—and his Jedi robes were burned and they played some music from Return of the Jedi [at the funeral]. And it was like the saddest, most beautiful thing of all time. How could Star Wars not be the most important thing in moments like that?

O’Rourke: I mean, ultimately, what we’re trying to say is we’re Star Wars jerks [laughs]. I like that it’s a basis for discussion, though. Somehow, the more I talk about it, the more it’s demystified in some ways, and yet it still can retain that magic.

Ferguson: It never feels like the conversation is over. It’s just another step on the journey to understand what Star Wars means, and, therefore, understand ourselves.

LISTEN: You can hear Bennett Campbell Ferguson and Josh O’Rourke debate A New Hope versus The Empire Strikes Back further at https://bespin.pinecast.co/episode/d7abd034/empire-strikes-back-v-a-new-hope.