The poster was straightforward enough: “WANTED: Tahm Kench – Devil, DEAD OR ALIVE”, followed by a generous sum. Only the Mechanical Devil’s got that kinda cash to pay. Samira ain’t sure why the other bounty hunters seemed so spooked by a little ol’ devil hunt. Well, let ’em shy away. This gunpowder witch don’t scare easy.

High Noon Samira’s splash art greets you with a bang, as she is seen in the middle of combat, hiding behind those who are shooting at her, her expression showing no fear. Her weapons glow red with flames that match the color of her vest, the gems on her earrings and chest accessory, and even her eyes (or eye, rather). The white highlight on High Noon Samira’s hair is sure to catch one’s attention as well, matching the rest of the skinline without sacrificing her original black hair.

The wanted poster beside her shows Tahm Kench; her target.

High Noon Samira’s recall animation hints at her lore in this alternate skin universe. Signs with Tahm Kench’s silhouette painted on it circle her and she shoots one, then the rest all at once. At the tail end of her animation, she flips a coin.

(Also, she wears a fancy hat.)

Her weapons glow a fiery red when she’s not using it, glowing even brighter when she does, as well as the trajectory that hits the enemy. All of Samira’s abilities light up in the same way as well, and her melee skills leave red writings on the ground. Her dash leaves a trail of cinders behind her, and her ultimate does the same whenever it hits an enemy.

As soon as Sion knew life, he knew rage: rage that ripped the restraints from the operating table; rage that crushed the bones of those men who tried to play at the miracle of Creation; rage that he ain’t, nor ever would be, the second clockwork angel they had hoped to construct. Sion knows rage, and so will the world. 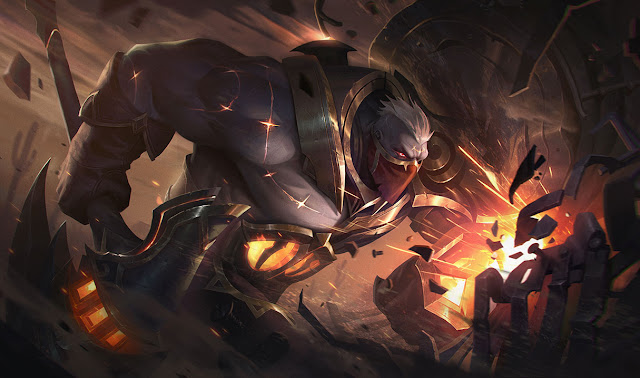 Sion comes charging in with full power in this epic High Noon Sion splash art. Scars that almost look like constellations line the width of his body, glowing as his eyes do. Golden armor covers most of his body, with his left arm fully equipped with a gauntlet. The armor covering his ribs, along with the blade of his ax, resembles a furnace, with actual flames inside of it.

Sion’s usual ponytail is replaced with a white mohawk, giving him a neater and cooler look befitting the skinline.

His in-game model showcases how gold his armor actually is, while the fire in his weapon and armor glows, staying true to the nature of the skinline. His attacks have a yellow and purple gradient to them as he charges his ability, then it burns red once he attacks, most prominent in his Q. He leaves behind a red circle on enemies he marks with his abilities.

When using his ultimate ability, a trail of train tracks materializes behind him, with the background sound even reminiscent of a train. After he travels a certain distance, fire envelops his body as well.

(Additionally, he kicks the enemies when he crits in a very tantrum-like manner, it’s almost cute.

When he dies and activates his passive, his body burns, leaving a trail of cinders behind him as he runs.

Tahm Kench is a magnanimous devil: happy to lend a magical sword to a lady in need, or to assist her in robbing the Sulfur Rail, or even to deliver her to a calamitous destiny as a fellow Harbinger of the End Times. He don’t need no compensation. She’ll just owe him a favor… because in the End, it pays to have friends. 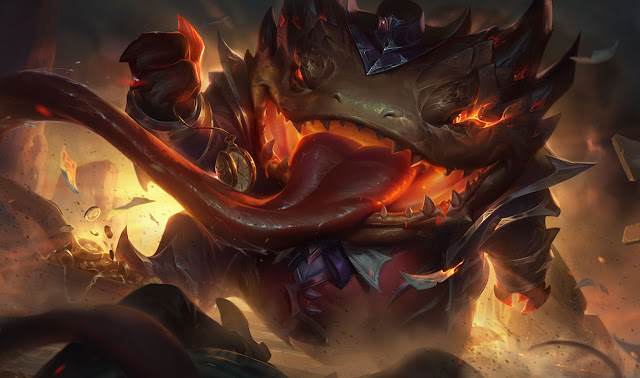 High Noon Tahm Kench stays loyal to his dapper look, with the top hat and the entire suit, vest, and bowtie drip, while he stands triumphantly over his fallen opponent. Horns protrude from his head, scales line his skin, and his irises are in red slits, solidifying his devilish, almost dragon-esque nature in this alternate skin universe. The interior of Tahm Kench’s mouth houses a fiery red, almost like he’s threatening a fire breath.

A nice accessory to note is the stopwatch he’s holding, something that rich gentlemen of his caliber absolutely must have in this time period.

High Noon Tahm Kench’s scales and fire-breath are more prominent in the in-game model, making him look all the more terrifying and powerful. However, parallel to this fearful appearance is how he very politely raises his hat in adieu during his recall animation, like the gentleman that he is.

Similar to the other characters in this skin line, Tahm Kench’s abilities leave fire-like trails on the ground, and marks hit opponents red with his abilities. His skin grows darker when he swallows enemies in his ultimate ability.

When he dies, he loses his top hat.

It starts like this: An ill wind blows across the desert, dessicated rats turn up in the streets, rotting under the hot sun. Then the traveling undertaker arrives. No one knows who (or what) he is, nor where he hails from… But it seems even Death has a bone to pick with the King of the Sulfur Rail. Another Harbinger arrives. 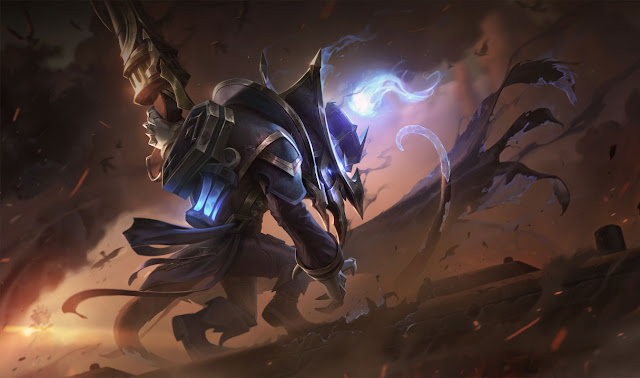 Contrary to the rest of the characters in the skin line, High Noon Twitch glows blue instead of red. His splash art is a lot more isolated and dark compared to the others, and his appearance is barely recognizable with how covered he is in clothing and accessories such as his mask, gloves, and hat, which gives his role as an assassin a whole new meaning. He’s ominous, almost villain-like in parallel to the other characters in this skin line.

High Noon Twitch’s passive stack design is unique to his appearance in this skin line, and the sixth stack resembles that of a stereotypical pirate flag’s design, with a skull and the two swords crossed below it. His Q ability showcases the effects they put on his voice for this skin line, effectively making him creepy and ominous when he says his voice lines. When he goes invisible, the effects are bluish grey.

His W ability looks even more deadly and poisonous, like gas that melts your skin when you touch it, and the smoke that comes out from the enemy hit by this ability completely sells that effect.

When activating his ultimate, Twitch gains a pair of black wings. Though he barely hovers over the ground, his movements do make him look like he’s floating instead of running.

His recall animation reveals that what looked like his backpack is actually a coffin containing a soul, and he uses it as a sort of portal to recall.

Many a road to Hell was paved with good intent. Dr. Viktor may be the Mechanical Devil’s kept engineer now, but his work began as charity: trying to “rehome” the souls of the dead in clockwork bodies, in order to circumvent mortality itself. Shame that Mordekaiser saw the good doctor’s kindness and struck him a deal he could not deny. 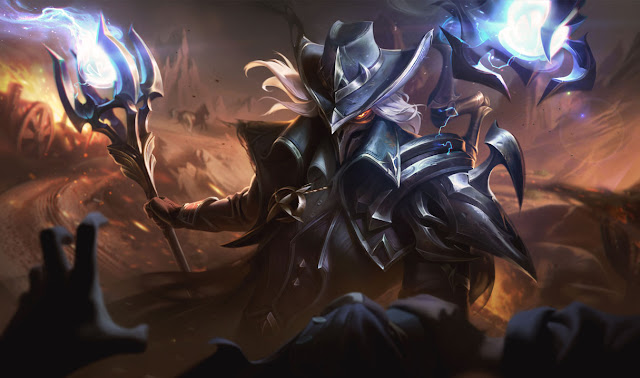 Dread and fear is invoked as High Noon Viktor appears to grab you by the collar and threatens you with what one can only imagine to be doom. Though his weapon glows a light blue, crimson peeks through his hat and mask, glaring. Behind Viktor is the remains of chaos—everything is running and has run away from him, burning and bright and deserted, while you, his victim, is dark and in panic.

His hair is long and white, flowing in the wind, the same direction as the light from his weapons. It matches with the other characters in this alternate skin universe, and is honestly a good touch to his visuals individually. The ends of his coat are nothing but ghostly smoke.

High Noon Viktor’s recall animation includes a coffin similar to High Noon Twitch’s, but he doesn’t use it to travel back to base. It is part of a little set-up, beside a table that had some sort of mannequin on top of it.

His auto attacks are the same color as the light-blue orb on his weapon. His abilities have a greyish-blue trajectory but with a red smoke leaving the enemy upon contact. Upgrading his abilities turns the orb on his weapon a cool-toned red. His visual looks almost steampunk-like, which is most prominent in his W ability, with the metals at the base of the sphere.

Prior to release, High Noon Viktor received the following changes: