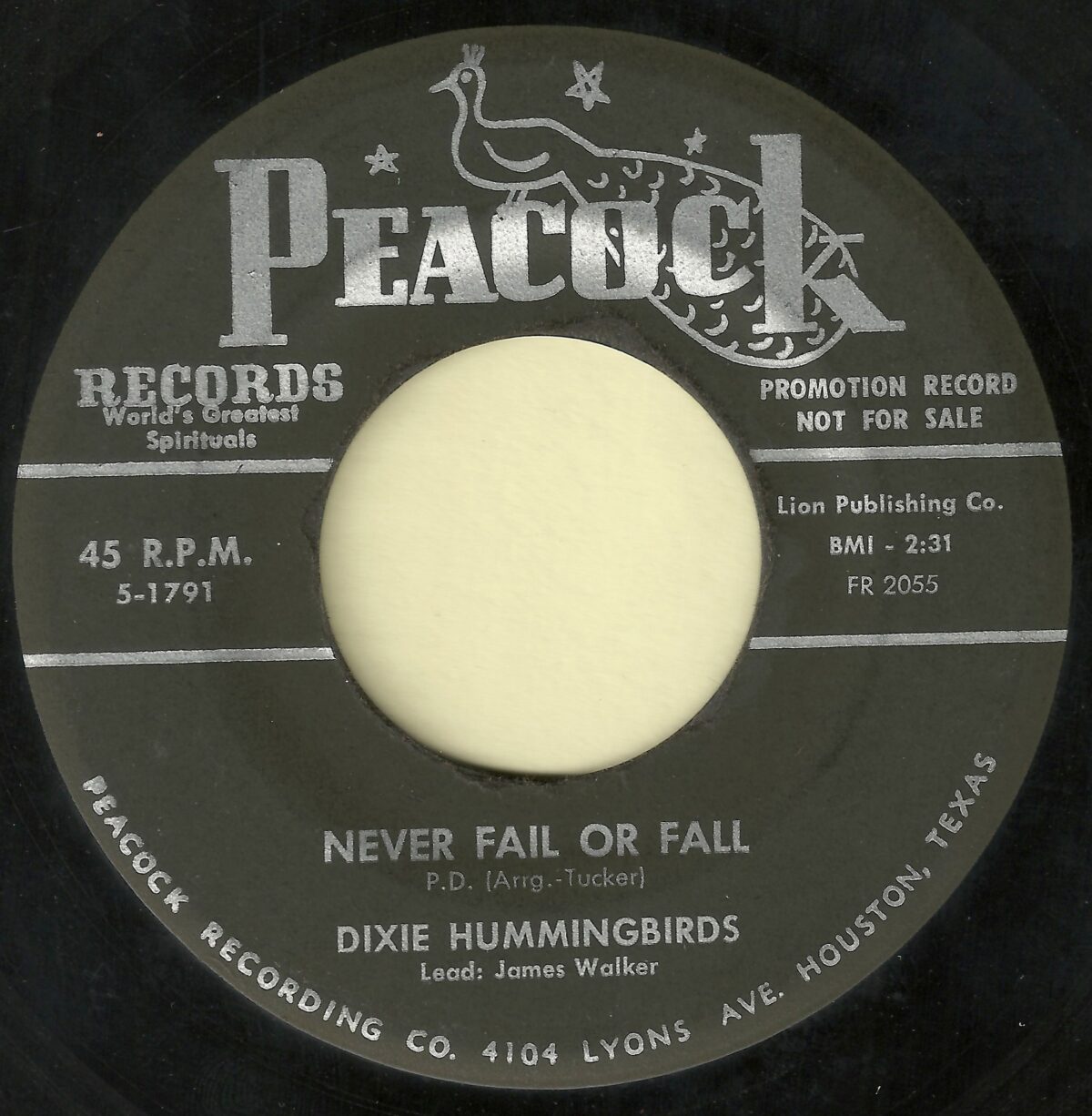 Elvis Presley could only be shown on TV from the waist up. In the 1950s, his was the original dirty dancing. Parents averted their children’s eyes from the Elvis pelvis. In America, we talk about “The Devil’s music” a lot. Why? Because America is where it got started.

Actually that’s not quite true. It got started back in the European Renaissance, but its induction was so subtle it was barely noticeable. But that’s where Lucifer originally snuck in to music. And that’s a whole different article.

In America, with the birth of rock ‘n’ roll, it was far more obvious. However, what the documentary “How They Got Over” purports to demonstrate is how rock ‘n’ roll came from Southern gospel. It doesn’t talk much about the more direct musical source of rock ‘n’ roll, which was the blues. But the blues and gospel are inextricably linked. The upshot is that the so-called devil’s music ironically developed out of God’s music. As they say: The road to hell is paved with good intentions.

While “How They Got Over” doesn’t exhaustively make the case for gospel being responsible for rock ‘n’ roll—it doesn’t dot all the i’s and cross all the t’s—common sense can fill in the blanks. I submit that it was the union of 1) gospel, 2) musicians in starving-artist, survival mode, and 3) American show business marketing that ultimately produced the devil’s music. And it’s a delicate issue to discuss in America, especially in today’s hyper-sensitive climate.

Why Call It ‘The Devil’s Music’?

It’s not a quaint phrase and it’s not a pious, church-y construct; it’s a real thing and a serious issue. Here’s a progression of lyrics for comparison: The following are sacred lyrics of Renaissance composer Giovanni Pierluigi da Palestrina (circa 1525–1594)

“Glory be to God on high, and on Earth peace to men of good will. We praise Thee. We bless Thee. We adore Thee. We glorify Thee. We give Thee thanks for Thy great glory. Lord God, heavenly King, God the Father Almighty. O Lord, the only-begotten Son, Jesus Christ.”

“The heavens declare your glory, the firmament your power; day unto day the story repeats from hour to hour. Night unto night replying, proclaims in every land, O LORD, with voice undying, the wonders of your hand.”

That’s the music of God’s house. Here’s where we are now: This is the devil’s music:

“Burning from the inside out, bloody foam spews from your mouth, smell the putrid stench of flesh as it burns you to your death.”

“I used to love her, too bad I had to put a slug through her/Dumped her body in the trash like I never knew her/Blood runnin down the gutter into the sewer/Her body stunk for weeks like horse manure.“

This is what American children are listening to. The gradual degeneration and destruction of human morality is real, and the soundtrack that accompanies the degeneration (the devil’s music) is real. And the above samples are very, very, very mild. If you do some research and read some lyrics, and you’re even a little bit sensitive, you’ll feel immediately physically ill. And by the way, for punk musicians, suicide accounted in 2015 for 11 percent of their deaths; for metal musicians, a staggering 19.3 percent.

‘How They Got Over’

While “How They Got Over” intends to demonstrate how 1930s, ’40s, and ’50s black gospel quartets ushered in the birth of rock ‘n’ roll, it doesn’t do a good job of this. It’s got no instructive voiceover that connects the dots cohesively. But anyone who knows American music knows this to be the true, historical, sacred-to-profane American musical evolution. What producer and director Robert Clem offers in this directorial debut is a chance to enjoy film clips of the pioneers of commercial gospel music.

“How They Got Over” traces the birth of gospel quartets from their sacred origins in the African-American church, to the traveling troupes taking the show on the road, and success of these groups on national television in the ’60s. It’s a fine history lesson. Talking-head interviews with the original musicians, now venerable elders of the art form, along with curated footage of their performances, is a deeply nostalgic and heartwarming experience.

Not a Lot of Options for Southern Black Men

Ira Tucker of the Dixie Hummingbirds, one of the successful groups of the ’30s and ’40s, explains that there weren’t many work options for Southern black men in the Great Depression. There was fieldwork, boxing, and music. Professional team sports were all segregated. But lots of people knew how to sing because they sang from a young age, growing up in the church.

And so gospel quartets could work a church circuit, with meals and room and board provided. It wasn’t much of a living, but it was better than digging ditches. The idea of making money by singing was purely logical, and the fact that churches were built-in community centers providing access to large audiences (which eventually lead to radio appearances and record contracts) made the whole concept a no-brainer.

As the saying goes, “The business of America is business.” It’s about marketing, branding, finding a niche, targeting demographics, and selling. The business America especially excels at is show business—the packaging and selling of entertainment.

And so the evolution of gospel quartets eventually taking the show on the road was very logical. Gospel “quartet” is a catch-all term (many “quartets” had more than four members), and they literally thrived on competition. They didn’t so much function as rivals but as a sprawling team effort in terms of generating buzz. Song “battles” were lucrative for both participating “rival” groups.

And here’s where commerce led to the devil getting a toe in the door: The quartets needed, like sharks, to maintain forward momentum in innovation to remain competitive and cutting-edge. Originally, the groups performed a cappella, or to organ accompaniment when in church, but they began to see the need to distinguish themselves from other competitors, thinking things like: That group got themselves a guitarist; we better get one too.

Little by little, whole backing bands came into existence. The louder and therefore more noteworthy, the better. The audience always wants to see and hear something new, and you better bring it, or perish.

Especially given the bristling, hostile racism all these groups encountered from the local constabulary while on the road, most of which they stoically shrugged off as having been a phase of American life that you just had to tolerate and forbear in order to survive.

Probably the most influential musician during those times was Sister Rosetta Tharp, whose electric guitar-generated musical inventions influenced Chuck Berry, from whence all rock ‘n’ roll stemmeth, and who in turn directly influenced the next generation of rock guitarists, most notably British Invasion visionaries John Lennon of the Beatles, Keith Richards of the Rolling Stones, and Eric Clapton. These then became the musical influencers of Jimmy Page of Led Zeppelin, whose Heavy Metal music (with some help from Punk rock) directly led to the Death Metal listed at the outset of this article. In addition to Chuck Berry, Little Richard, Aretha Franklin, Jerry Lee Lewis, Tina Turner, and Johnny Cash have also cited Sister Rosetta Tharp as one of their main musical influences.

And naturally, lyric-wise, the music gradually segued from the sacred to the profane. Nothing sums it up better than one gospel elder saying, “Instead of saying “God,” put “baby.” That’s how you sell records.

“Hard gospel” shouters who would leave the stage and walk amongst the faithful, would gin the emotions up so high, shouting for God, that the ladies present would have passionate experiences distinctly more profane than sacred. In fact, one amusing anecdote is of an elder recalling some singer saying his group would always have audiences on their feet applauding. This elder said his group calculated the success of their performances more by how many women were laid out on the floor in a dead faint. 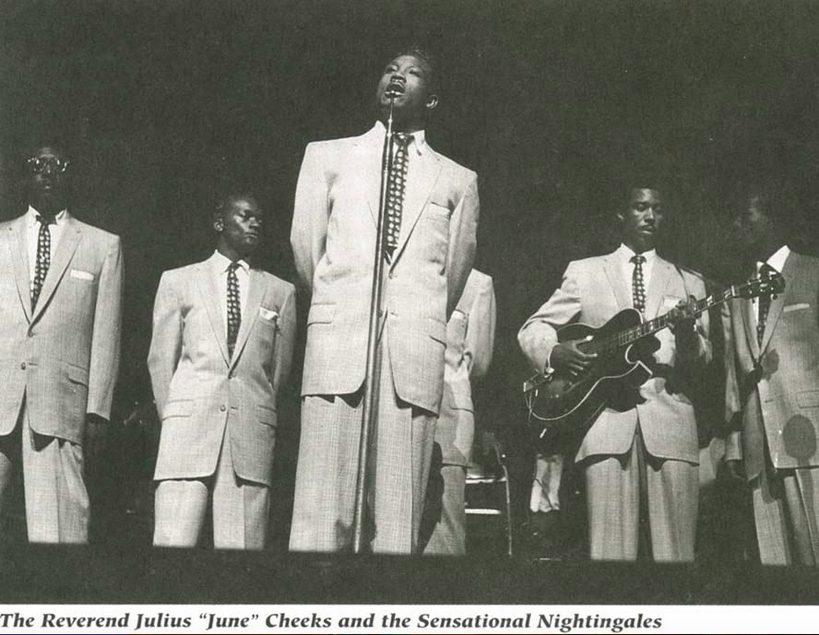 Perhaps the most famous graduate of the gospel movement was the Soul Stirrers’s Sam Cooke. Good-looking, with a soulful crooning tenor, Cooke was one of the first to sign a contract as a pop singer. He’d pull out scads of cash to demonstrate to the gospel musicians he’d left in the dust that there was was tons of money to be made on “the other side.”

Some were steadfast, such as Isaac Freeman whose astounding basso profundo is a reason all by itself to watch this documentary. Freeman told Cooke he’d rather starve than sell out for money. Cooke was followed by Aretha Franklin (who’d toured the gospel circuit with her father) and by Lou Rawls, and eventually Dennis Edwards of (the sacred) The Mighty Clouds of Joy, who later joined (the secular) The Temptations.

One could argue that gospel more accurately segued into American Soul music via Franklin and Rawls, but since Tharpe’s guitar influenced the four “kings” of rock ‘n’ roll—Chuck Berry, Little Richard, Jerry Lee Lewis, and Elvis Presley—it generated both. Missing, strangely, from the line-up, is Mahalia Jackson, who was arguably the most popular gospel singer of all time.

Where We Are Today

Gospel’s still an important force in churches today. Although musically, while retaining its original roots, it has been hugely influenced by late 1970’s fusion jazz, and the virtuoso musicianship that reigns today amongst musicians such as former child-prodigy organist Cory Henry (of the band Cory Henry and the Funk Apostles) and his cutting edge bassist, Sharay Reed. Reed posts his church gospel playing on Instagram every Sunday.

Ultimately “How They Got Over” is an opportunity to view archival footage and listen to the originators of the genre. But it’s also a bit of a treatise and example of what tends to happen in America at the crossroads of spirituality and commerce.

‘How They Got Over’
Director: Robert Clem
MPAA Rating: Documentary
Release Date: 2018
Running Time: 1 hour, 27 minutes
Rating: 3.5 out of 5 stars