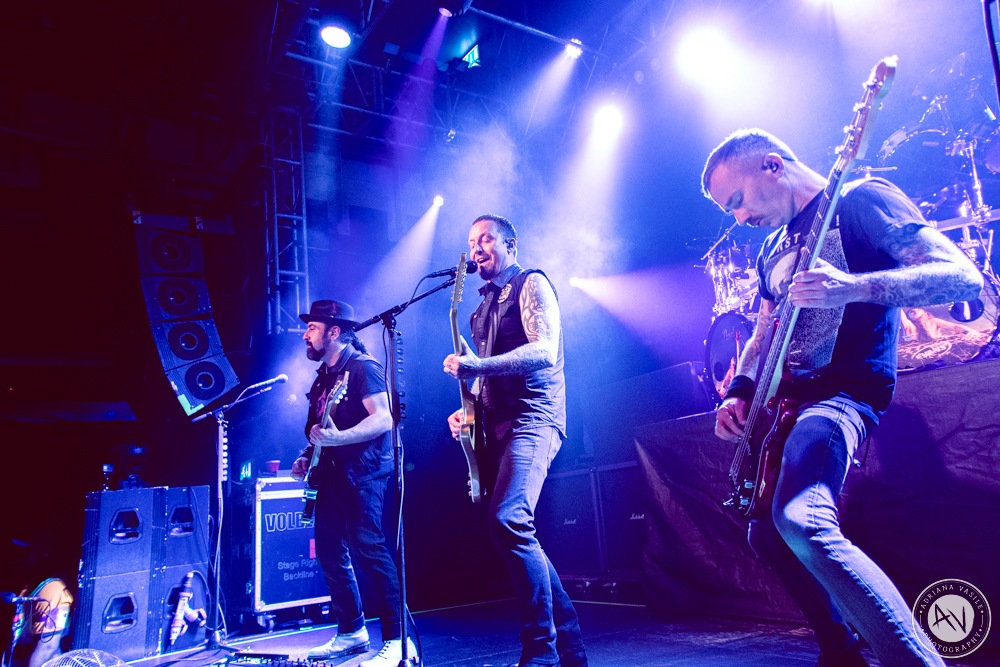 
“Why is a European festival headliner doing club shows in Islington?” echoes around the London Borough as a centipede of a queue wraps around the O2 Academy Islington. But it’s been three years since VOLBEAT bought their rockabilly circus to our shores, so a sweaty club show is the perfect way to shake off any ring rust before a summer of festivals, including Download Festival.

Piling into the venue like sardines in a tin, it’s either swim to the front on the shoulders of giants or shimmy like you’re 2D platforming your way through this level of madness. But save for a handful of fans, there’s few here who’ve forsaken the bars across the road at 6pm on a Saturday to see death metal stalwarts BENEDICTION – the blank faces do more than enough to show they’re here for one band, and one band only.

It’s not that BENEDICTION’s death metal for dummies is bad; if you were served them as meal, you wouldn’t grumble – you just wouldn’t gush about it either. Frontman Dave Ingram does his best at self-deprecating stand-up between songs – “this one is about a car crash, which this could end up being!” – but it’s only long-serving guitarist Darren Brookes who ever looks like he’s actually having fun up there.

It says a lot that there’s more facing the bar than there is the stage during any given song, and it’s painful to think that a song as crushingly good as They Must Die Screaming doesn’t even get a pit to write home about. But everything seems to fall flat for the band this evening, with much of the crowd keeping their feet on the ground and their head banging to a bare-minimum bob.

Clock watching isn’t common at good gigs, but there’s more than a few phones being checked by confused faces as they wrap up their set and shuffle off stage.

VOLBEAT on the other hand, have no trouble firing up a frenzy from the front to the back. It’s minutes before they hit the stage, yet the entire sold out room erupts like a choir at a mass to howl the words of AC/DC’s Highway To Hell as it roars out the venue’s PA system.

The Danes receive a hero’s welcome as they enter one-by-one, with drummer Jon Larsen making the ascent up his mountain of a drum riser to a rapturous response. As they kick into opener The Devil’s Bleeding Crown, it’s clear from the off that there’s no ring rust here – just one of the world’s best live bands being exactly that.

Charismatic frontman Michael Poulsen makes the most of every moment, whether it’s baiting the crowd to cheer them some more – “Feed me my people! Feed me!” – to highlighting just how special a gig this one is for them – “It’s been a long while since we played a club show” – to impersonating his idols ELVIS PRESLEY and JOHNNY CASH before bursting into a ground-shaking sing-along cover of Ring of Fire.

VOLBEAT are infectious. They’re good-time vibes are worn like smiles of honour on the faces of every member – including guitarist Rob Caggiano and bassist Kaspar Boye Larsen – and they carry over to the crowd, as there’s not a blank face to be found. It’s part in thanks to an opening onslaught of heavyweight hits with Pelvis On Fire’s rockabilly dance of death getting the bodies boogieing, and doesn’t stop as Temple of Ekur and Lola Montez bring the house down, with the latter’s song-long sing-a-long a standout of the night as not a single soul in the room didn’t stop.

Just as you thought they couldn’t get any better, they slip into second gear like they’re gunning for the grand prix. The marching drums of A Warrior’s Call sounds the sirens, as Poulsen’s bellowing vocals ushers in a mental medley of the swaggering anthem and their fan-favourite cover of Dusty Springfield’s I Only Wanna Be With You with the iconic lyrics “let’s get ready to rumble.”

From here on out, it’s chaos unleashed as bodies fly about the room – some mosh, some jive, and some do both simultaneously – as they launch into a run of anthems so many artists would be envious of having in their back pocket: Dead But Rising, Say No More, Last Day Under The Sun, Wait A Minute My Girl, and Black Rose.

Despite the dazzling display of heavyweight hits tonight, it’s clear that VOLBEAT are slowly but surely shaking off their past. They nail 19 songs tonight, but less than a handful are from their first four albums, with the majority of the set coming from 2013’s Outlaw Gentleman & Shady Ladies, 2016’s Seal The Deal & Let’s Boogie, 2019’s Rewind, Replay, Rebound and last year’s Servant Of The Mind. Whilst arguably no one is batting an eyelid, it does leave you wondering about whether they’re letting their legacy get lost in their fame.

But none of that matters as The Devil Rages On does exactly that, as the power trio of Caggiano, Poulsen, and Larsen rotate around the stage sharing their duties all over the place. Whether it’s Poulsen polishing off his chops on any given mic or Caggiano taking centre-stage for any one of the seven billion solos he shreds through tonight, it’s clear this is a band born to entertain, and a band who are at the very top of their game.

An encore of The Sacred Stones, Die To Live, and Still Counting serves as a final reminder that shows like this don’t always come along. VOLBEAT are a band who belong in British arenas and headlining British festivals, just like they do across mainland Europe, so this may well be the final time we see them so up close and personal. But when everyone’s having this much, what the hell does it matter?

Check out our photo gallery from the night’s action in London from Adriana Vasile Photography here: 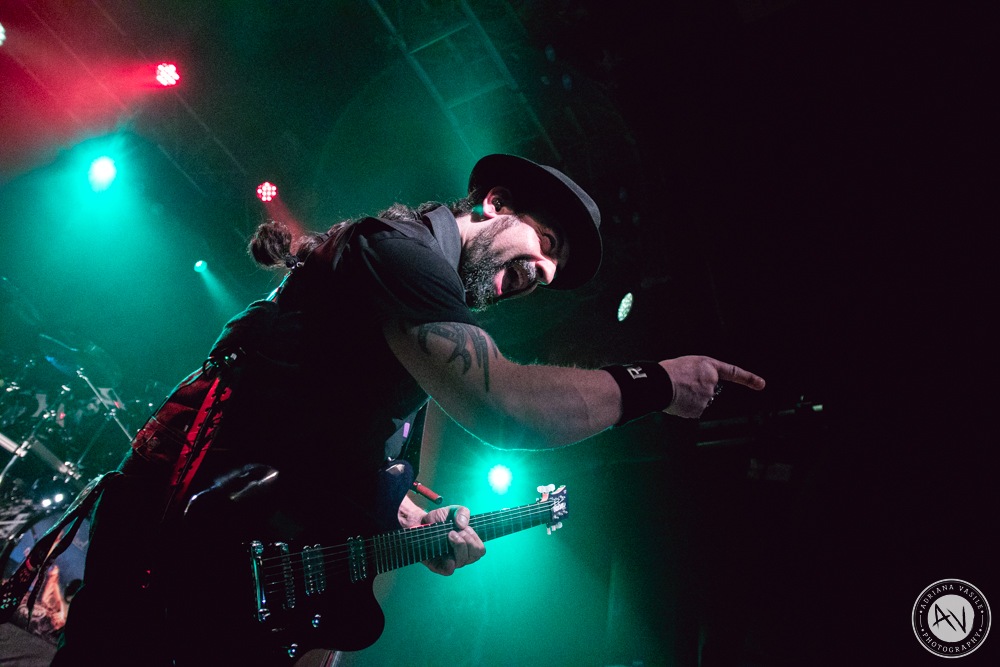 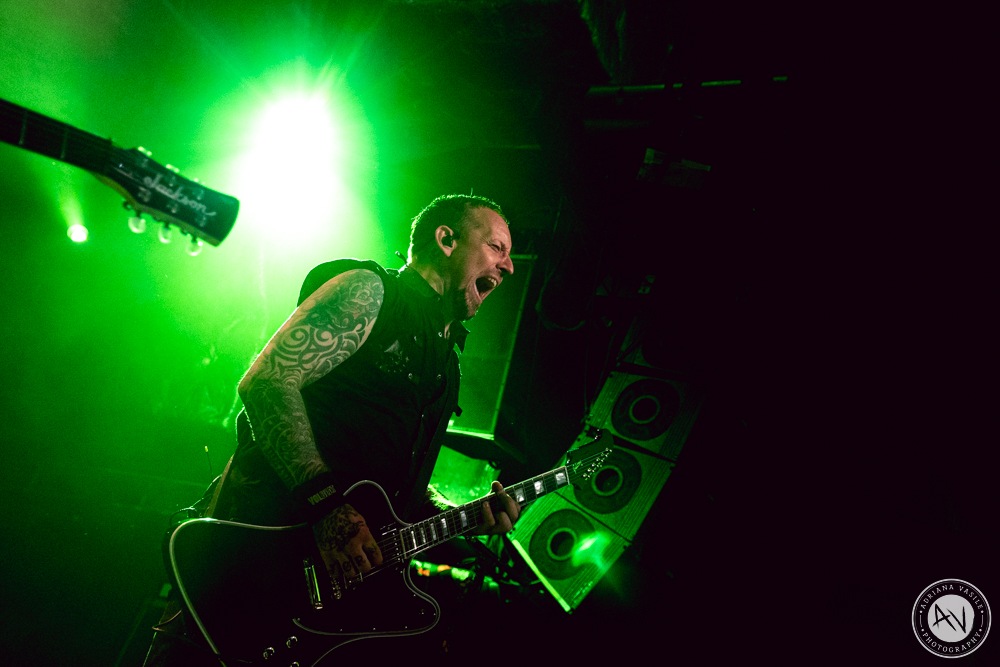