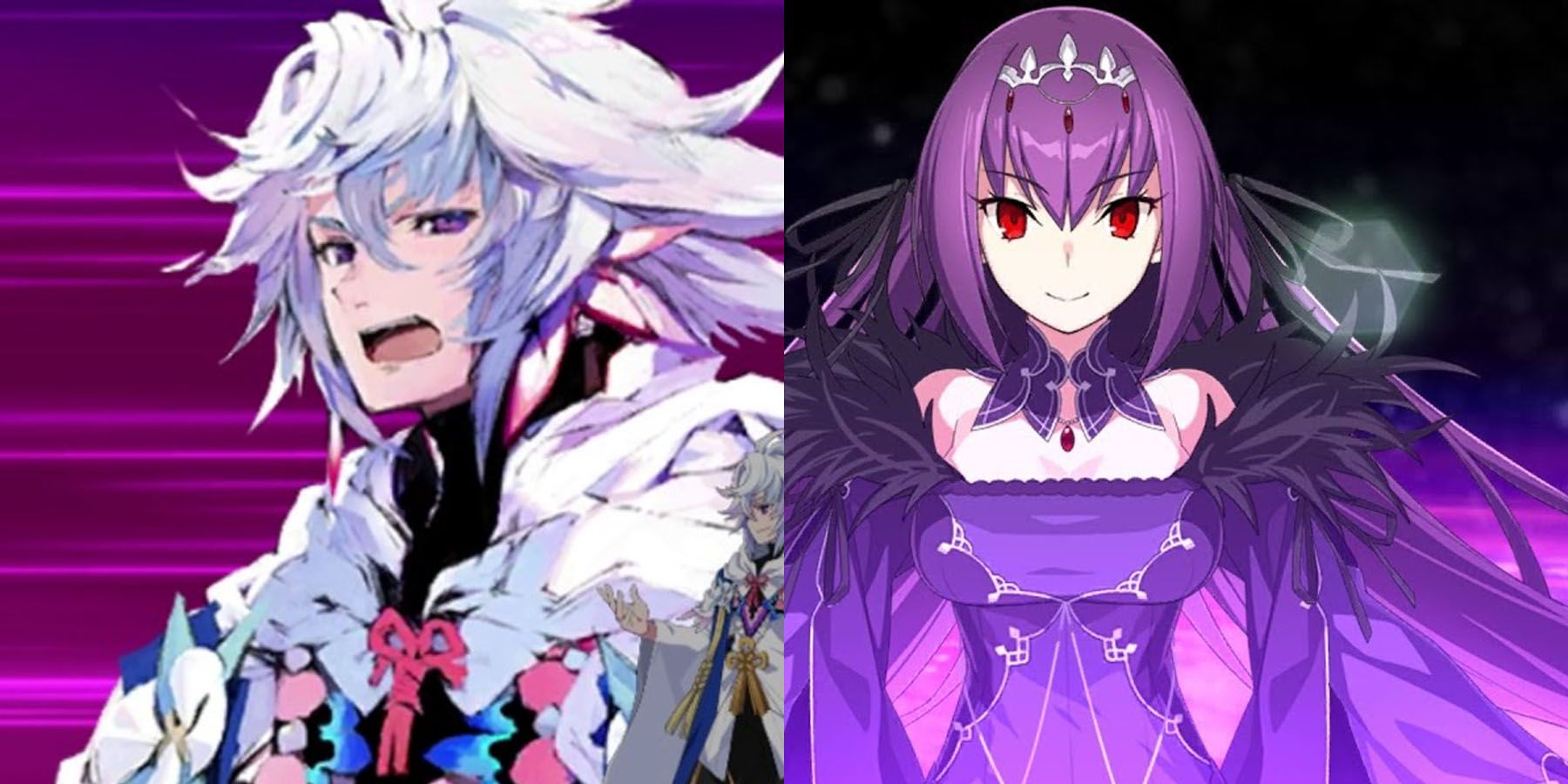 
If there’s anything one could associate Fate/Grand Order with, it would probably be “gacha.” This is especially the case with the game’s offering of 5-Star Servants. With the game barely offering players a chance to acquire them, these 5-Star Servants have become some of the most coveted characters in the title.

However, for players who do have a chance to acquire 5-Stars via guaranteed events and Limited-Time promos, there are some they might want to pay close attention to. Which of the game’s 5-Star Servants should Fate/Grand Orderplayers get?

The ever-faithful companion of Gilgamesh in the Epic of Gilgamesh, Enkidu proves one of the most competent 5-Star Servants. Enkidu’s kit becomes a decent boss killer, provided players can use his skills efficiently. Enuma Elish (Noble Phantasm) not only is a decent damage-dealer, but it also stuns opponents. Pulling off his 5-Hit Arts with a decent NP Gain can help him spam star generation for him and his allies as well. Finally, his Perfect Form A (Skill) can restore a huge chunk of his lost HP.

The only setback for Enkidu is his middling damage output, especially when compared to other Lancers. Enkidu becomes vulnerable if he doesn’t pull off his stun NP properly, which downgrades him into a sub-DPS. Not only that, his lack of invulnerability or dodge prior to his Rank-Up Quest leaves him vulnerable in higher-level dungeons.

This super-charged form of Orion comes to save the day in the Atlantis Lostbelt questline, reflecting the love Artemis has bestowed upon him. With his toolkit, Super Orion becomes a deadly card damage dealer. His primary damage output has less to do with the attacks themselves, but rather scoring the card combos.

RELATED: Fate/Grand Order: Things To Do When Starting Out

His NP Artemis Agnos isn’t a damage-dealing super, but rather provides him with larger attack buffs, star generation, and immunity to both debuffs and invincible status effects. This works well with skills such as Stout Art Of Brutality, Tri-Star Archer, Moon Goddess’s Pressure. Overall, Super Orion is a must-have for the sake of maximizing damage output regardless of the cards stacked on the table.

When Tamamo-No-Mae cut eight of her nine tails as a form of repentance for her mischievous past, this Caster becomes one of the best NP-spammers and Arts support in the game. Her Fox Eightfold Blessing Of Amaterasu (NP) is a nifty heal and skill cooldown reducer for allies, which works in tandem with damage-boosting Curse (Skill) and Arts-buffing Fox Wedding (Skill). Tamamo-No-Mae is the perfect companion for pure Arts teams.

Tamamo-No-Mae’s weakness is that she doesn’t shine as much outside of Arts teams. With the lack of these blue cards to augment NP Gain, Tamamo-No-Mae gets much less in terms of NP-spamming. While still potent outside Arts teams, she shines more with precise Arts builds.

A far cry from her popular depiction as an emperor, Nero Claudius (Bride) is a redesign that follows a storyline of Nero being presented as a bride-to-be. While she looks like she’s in a hurry to get to the altar, this Nero iteration is one of the best support-damage hybrids in the game. At first glance, her Fax Caelestis (NP) seems to cement her damage-dealing status. However, the rest of her kit proves her competence to support her team as well.

RELATED: Best Servants Who Are Not In Fate/Stay Night Or Fate/Zero

Stars For The Sky (Skill) can boost an ally’s NP Gain, whereas Flowers For The Earth (Skill) boosts both attack and critical rate. Lastly, Love For The People (Skill) can boost both their defense and heal HP. Nero can also use these skills on herself, meaning she can either boost her own performance or an ally’s. If players can ensure Nero stays in the match, she can transform any team into a juggernaut.

Despite her charming appearance, Kama is one of the best Assassins in the game, especially following the Quick-Meta. Her Kama Sammohana (NP) and its single-target nature already cements her place as an Assassin, but the chance of stunning its target via Charm makes her more competent in boss fights.

Additionally, Blessing Of The Goddess (Skill) can give her a nifty heal and allow her NP to Overcharge, which with Ananga EX (Skill) can give her boosted damage alongside nifty invulnerability via Guts. More extreme is her Mara Papiyas, which not only boosts her NP Gauge and critical strength, but also practically guarantees Charm via her NP. Most importantly, she’s one of the rare Servants that can manipulate her Class Affinities, with Mana Papiyas allowing her to deal more damage to Alter Ego Servants.

When Arjuna of Chaldea severed his link to the gods, he became an alternate self compared to his Lostbelt iteration. Contrary to the original Arjuna, this iteration is one of the best Buster Servants in the game, capable of dishing out incredible damage through Mahapralaya (NP) provided players can find a way past his glass cannon nature.

Toolkit wise, Arjuna does possess incredible Buster-buffing Skills. His Anti Evil (Unique) (Skill) boosts his attacks, especially against enemies with debuffs. His damage output increases further with Clairvoyance (Transcendant) (Skill), which boosts his NP Gauge and critical rate. While Arjuna lacks defenses compared to his other counterparts, his Soul’s Light (Skill) does give him gradual heals as well as Guts.

Hailing from outer space, Space Ishtar is perhaps one of the most straightforward Avengers in the game. She focuses on dishing out damage as often as possible, with a toolkit that allows her to boost her damage exponentially while also regaining her NP at a much faster rate. Her Edin Shugurra Quasar (NP) not only deals damage to all opponents, but also increases the attack of her Extra Card combos.

RELATED: Best Type-Moon Games & Releases That Are Not Part Of The Fate Series

Her damage-focused output fares well with attack-boosting Devil’s Sugar (Skill). Not to mention, NP Gauge-boosting Multiple Starling (Skill) also has an 80% chance of boosting the effectiveness of any one Card Type. And with Venus Driver (Skill) allowing her to charge her own NP Card alongside NP Strength and Invincibility benefits, Ishtar can combo her NP into almost any card combo. Of course, the 80% reliability rate of Starling’s damage boost may make Space Ishtar a bit unreliable when it comes to “guaranteed” combo strings.

Perhaps one of the best NP-based support Casters available, Zhuge Liang (El-Melloi II) is a must-have for any team. His Unreturning Formation (NP) alone not only deals damage-per-turn, but also reduces enemy defense and Charge, hindering their powerful super attacks by one turn.

Hailed as one of the best Buster-based support Casters in the game, Merlin proves his worth. His Garden of Avalon (NP) not only gives per-turn healing, but also per-turn NP Gauge fills to all allies. This works well with his damage-boosting and NP Gauge-boosting Dreamlike Charisma (Skill), especially for critical fights. Defense-wise, Merlin can cast Illusion A (Skill) to boost the team’s critical damage while applying Invincible for a turn. His Hero Creation EX (Skill) can boost an ally’s Max HP and critical damage as well as Buster Card efficiency.

Perhaps the biggest hole in Merlin’s potency is his lack of defense boosters, making him a target for bosses that can render Invincibility useless. Moreover, if Merlin can’t charge his NP frequently, his offensive presence may not be as viable.

Perhaps the most competent support Caster, Scathach-Skadi is a great all-rounder to add to any team due to her focus on survivability. Her Gate of Skye (NP) not only boosts the team’s critical damage, but also gives them nifty Evade and Death Immune bonuses, ensuring survival against peskier boss fights. Even her slate of Skills are straightforward in terms of benefits. Primordial Rune is a great Quick support, Shivering Blizzard decreases enemy defenses, and Allfather’s Wisdom boosts an ally’s NP Gauge for the finisher.

She works best teamed with other AOE Quick Servants, especially since her Quick boosts can make their NPs repetitive. However, her lack of offensive attacks limits the team’s offensive output. And with her lack of healing and stalling skills, Skadi can become vulnerable once enemies start piercing her defenses.

Fate/Grand Order celebrates its 5th Anniversary in July 2022, and is available to play on iOS and Android.

MORE: Fate: The Order You Should Watch All The Anime Shows And Movies