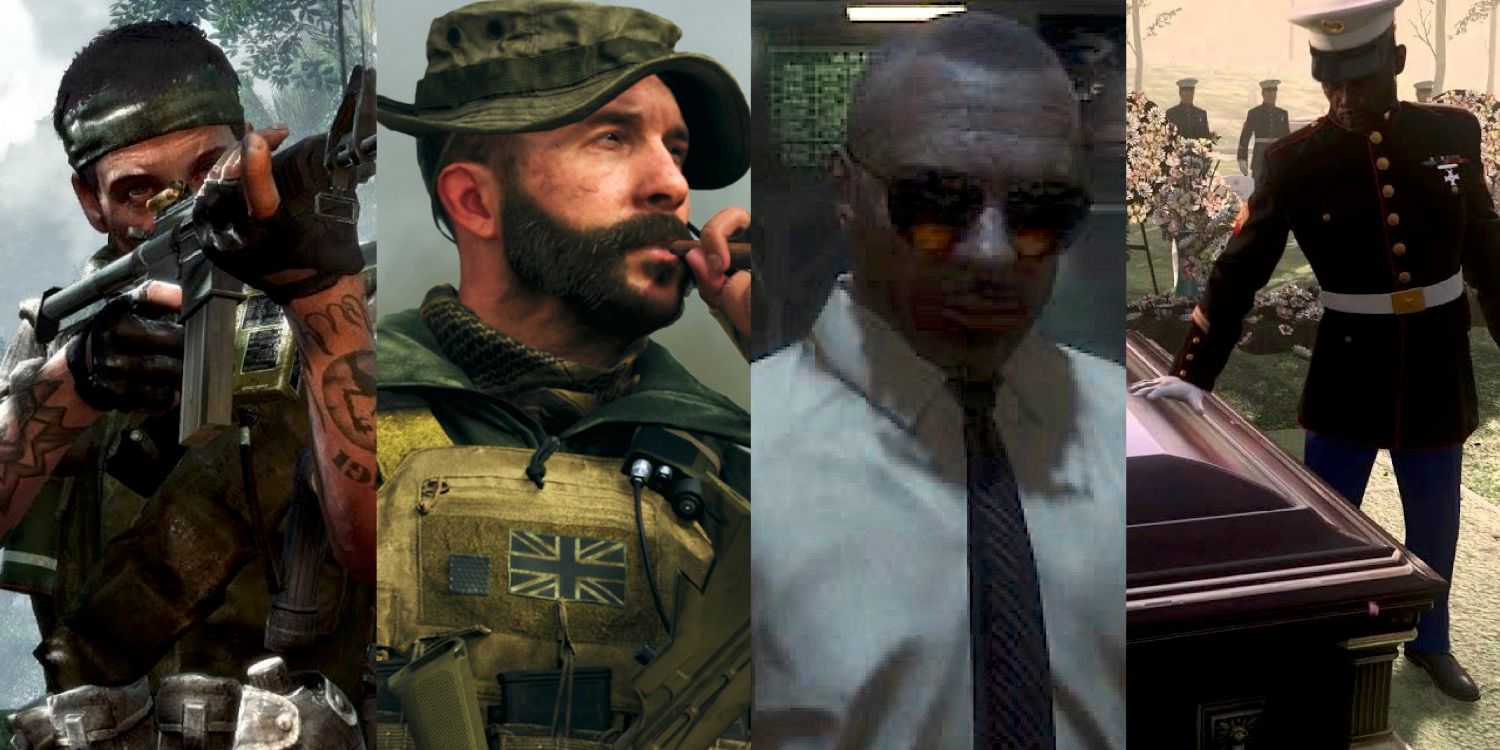 
The Call of Duty video game series has been an industry staple for nearly two decades at this point, and has produced some of the most memorable single- and multiplayer experiences for gamers across the world. Among the most enjoyable campaigns, though, lie stories that compel players, and within those stories lie some memorable quotes.

Out of the many titles in the franchise, a few characters and quotes have risen above the rest to remain in players’ minds long after the games have ended. These are the ones that have truly become iconic.

Ally call-outs are a staple in video games, and usually take the form of either helpful hints or imperative warnings. With the case of Frank Woods in Call of Duty: Black Ops, however, it takes the form of him letting the player know they’re being shot.

RELATED: 10 Cliches in Every Call of Duty Game

It’s said in a serious context but is unintentionally hilarious. If the gathering red on the screen and the sound of gunfire weren’t enough, this probably isn’t going to dissuade players from continuing to run toward the threat. It makes no sense in the game (nor would it really make sense in real life), which is exactly why it’s hilarious and, therefore, iconic.

Two of a Kind

“You suffer with me.” – Raul Menendez.

Black Ops II offered some innovation to the franchise by taking place in the future and by having multiple possible endings depending on player actions. While its storyline is engaging, however, its most notable character is its antagonist, Raul Menendez, who exacts vengeance on Mason and Woods.

Said to a child David Mason after David’s father is seemingly killed, it shows how Menendez sees himself in David, as he himself experienced tragedy and loss at around the same age. The quote summarizes how Menendez still retains a bit of complexity even as players are tasked with hunting him down.

“To know you’re close to the end is a kind of freedom. Good time to take… inventory.” – Captain Price.

Sometimes a video game can tap into real-life experiences better than any player could have expected, and this moment from Modern Warfare 2 with the also-iconic Captain Price is one of them. He knows his time may be coming, and it makes him reflect on life.

Not only does this help stir up players by implying that the characters are facing “the end,” but it also does what all profound quotes do: speak the truth. Often, facing mortality means taking stock of one’s life, and this line is applicable far outside its originating context. It’s a time when the game actually becomes quite universal in its themes.

“The numbers, Mason! What do they mean?” – Jason Hudson.

Inspired by classic action movies, Black Ops tells a story of the 1960s conspiracy-laden Cold War era, giving players an amazing experience with doses of mystery and paranoia. It all comes down to the numbers Mason is able to receive through transmission.

At the time players hear this line, though, it isn’t clear who is interrogating Mason, and players are just as in-the-dark as he seemingly is. It compels the player to want to continue, to get to the bottom of this as a detective would. This angle added a different feel to the series, and players won’t ever forget the mystery.

“Your world as you knew it is gone. How far would you go to bring it back?” – Captain Price.

This quote opens Call of Duty: Modern Warfare 3, a game that wrapped up that sub-trilogy in a way that disappointed many fans, to the point where it’s unpopular to say Modern Warfare 3 was the best game of that series. But how could this opening quote not give a player chills?

The characters have to rally after the devastation left at the end of Modern Warfare 2, and at the same time are facing a worldwide threat from their old foe, Makarov. It all seems hopeless, yet they’re determined to succeed; this quote gets to the pathos of that feeling incredibly well. It’s also a compelling question for real life. What would one do if they seemingly lost everything?

Arguably the best Call of Duty game, Modern Warfare was the first to take the series away from World War II, and it produced an amazing result. Its most famous quote, though, comes from Captain Macmillan describing Pripyat, the town near the Chernobyl Nuclear Power Plant in the “All Ghillied Up” mission.

It’s become an oft-repeated phrase online, referenced in particular when it comes to abandoned or isolated locations, but it began from this game. The quote fits well with the level, as players are able to use stealth to advance as if they themselves were ghosts. Chilling and well-written.

For Alex Mason’s campaign, players have seemingly been working alongside World at War‘s Viktor Reznov to gather intel and take revenge on those who experimented on Mason during his time in the gulag, with Reznov killing a former German scientist. In reality, it’s a hallucinating Mason who does this.

The villainy of the scientist Steiner, as well as the other targets Mason is after, were established in a previous level which sees World at War protagonist Dimitri Petrenko callously killed by them, bringing all players into agreement with the mission. When it seemingly pays off, it’s thrilling, even if a later scene recontextualizes it as terrifying for possibly dooming the world.

Mason was programmed to be a Soviet sleeper agent, but Reznov interfered with his programming and added the directive for him to kill these three men in revenge for Petrenko’s death, which leads to the scene where Steiner is murdered.

It repeats not only in this game but once again in Black Ops II when Kravchenko is revealed to be alive, which helps add to its iconic status. It’s also a bit tragic since Reznov’s personal quest for vengeance through Mason nearly leads to worldwide destruction because Mason kills Steiner before he can reveal what he knows to the Americans.

Many critics argued that Call of Duty: Modern Warfare 2 went too far with its “No Russian” mission, with players seemingly (though not actually) required to murder civilians at an airport as a false-flag operation for Makarov’s organization to jumpstart war.

The controversy over this level meant its title, which comes from the quote, would be forever remembered in the annals of video-game controversies. Whatever side one stands on with this issue, there’s no doubt that the mission is impactful, and that for anyone even vaguely familiar with the controversy, this line is an immediate reminder of that.

A Prompt for the Ages

It may not be said by any character in the game, but this Advanced Warfare button prompt has garnered more attention than pretty much anything else about the franchise, including the “No Russian” controversy, because of its status as a meme.

It’s done at a funeral, in a scene that had no reason to contain interactivity. What was clearly meant to involve the player in the character’s grief instead takes the player out of the moment and reminds them that they’re playing a game at the worst possible moment. But it will live on in gaming and Internet history.

NEXT: 10 Games That Flopped Due To Buggy Releases

Destiny 2: How To Get The Lingering Dread Grenade Launcher (& God Roll)

Ryan Ten is a list writer for Screen Rant and self-published author on Amazon. He is passionate about movies, TV shows, comics, and video games that have a compelling story to tell.