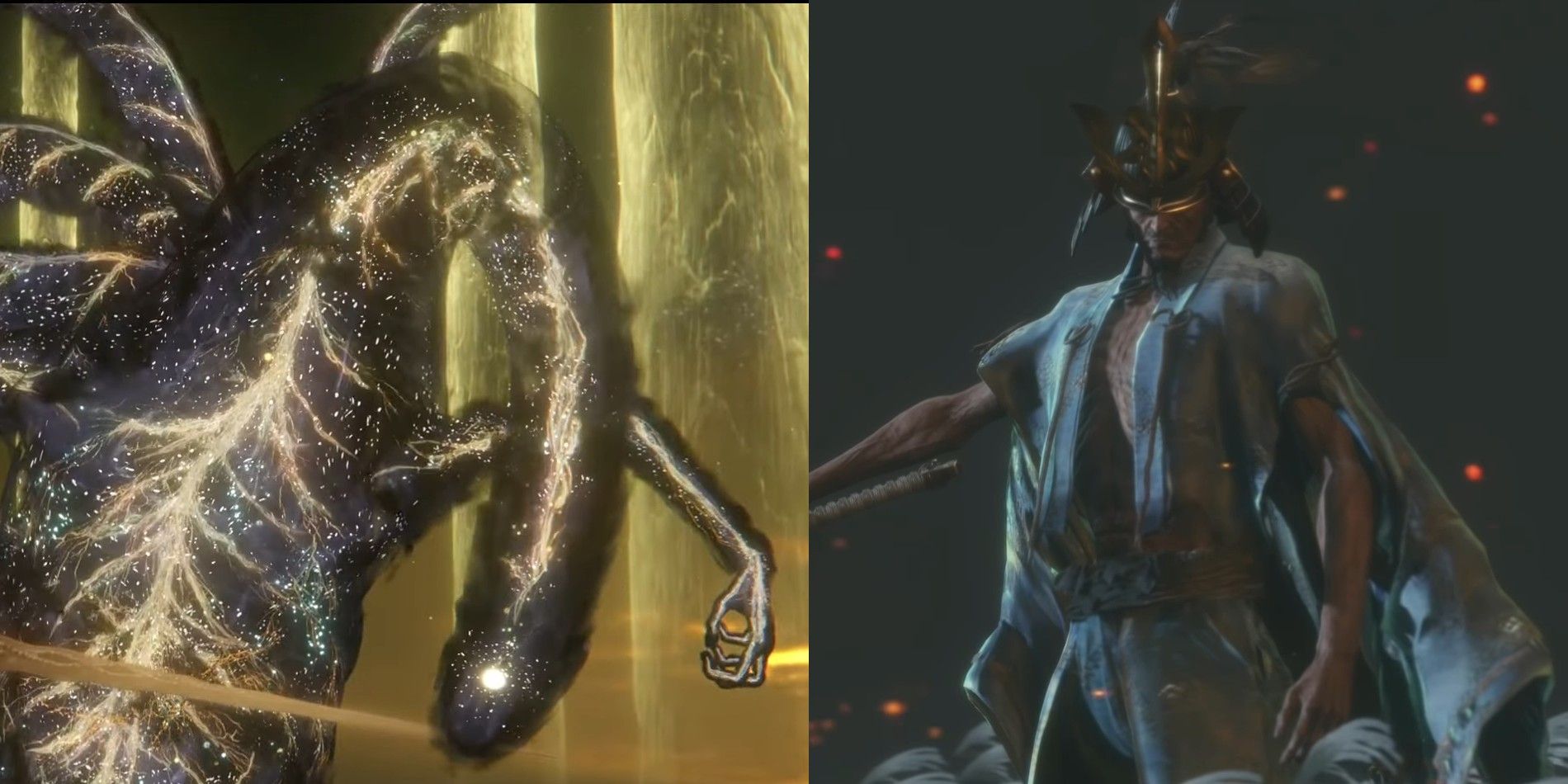 
Elden Ring, FromSoftware’s newest “Soulsborne” game, immediately captivated its audience after its release, and though it excels over its predecessors in many areas, its bosses never quite reached the bar that Sekiro set. Elden Ring is a far larger open-world game that balances its RPG character customization system with diverse action mechanics. Sekiro, on the other hand, is a relatively linear but far more fast-paced, fluid, action-oriented game with minimal character customization compared to previous Soulsborne titles.

Sekiro‘s minimalism caused it to lean into its satisfying, simple, and lightning-fast fight mechanics, leaving its world and character customization somewhat lacking in comparison, but allowing it to rule as the master of FromSoftware boss fights. Each boss fits into Sekiro‘s timing-centric combat gameplay differently, forcing players to adapt their play style rather than drastically change their build. This makes every boss feel like a unique obstacle. Unlike in Dark Souls, players can never brutally overpower a boss with stats alone; every challenge is a legitimate test of skill.

Despite its many strengths, Elden Ring‘s boss fights fall short of Sekiro‘s, largely because it discards Sekiro‘s agile mechanics in favor of comparatively sluggish Dark Souls-style gameplay. Once again, blocks and dodges take precedence over parries, and though this allows for a much more diverse character customization system (heavy weapons and magic have no place in Sekiro), it makes fights far less satisfying. Elden Ring just isn’t fast enough to require the same level of skill as Sekiro, so it naturally places more importance on player stats. Of course, players can choose not to bully their way through Elden Ring‘s many bosses, but the option serves as a reminder that the game’s vast class-building system sacrifices the quality of its gameplay.

This is not to say Elden Ring is entirely stat-based, and ambitious players have beaten tough bosses with intentionally low-level, ill-equipped characters. The process of memorizing boss attack patterns and attacking during openings is similar in theory, but Sekiro‘s bosses require constant aggression paired with honed reflexes, and its posture system and emphasis on parrying make every boss battle into a distinct rhythmic exchange. Raising attack power in Sekiro does make a difference, but bosses scale well enough with every playthrough that it never feels easier; bosses also do enough damage that true greatness in Sekiro means the player won’t get hit at all. Clearing Elden Ring‘s harder bosses without taking damage usually requires a more cautious approach (or the use of ranged attacks), and its slower pace means more time to think and react during combat.

To Elden Ring‘s credit, its bosses work very well for a game that basically functions as the next Dark Souls, and they are some of the coolest-looking, most powerful-feeling bosses FromSoftware has ever developed. In fact, many of Sekiro‘s bosses are just tough humans with melee weapons. However, Elden Ring‘s emphasis on evasion means every combo from every boss just feels like another source of damage that requires the same reaction from the player. Unlike Sekiro‘s visually underwhelming but mechanically diverse set of bosses, most of Elden Ring‘s boss fights don’t feel particularly unique or special; they all allow players to employ the same tactics with different windows of attack. Elden Ring‘s removal of Reflections of Strength hinders its boss system even more; while Sekiro allows players to repeat boss battles whenever they like, Elden Ring (despite its massive size) requires players to start the game anew to access their favorite encounters. Hopefully, FromSoftware’s next game will strike a better balance between diverse combat mechanics and well-designed, satisfying boss fights, but until then, Sekiro still serves as the apogee of FromSoftware boss battles.