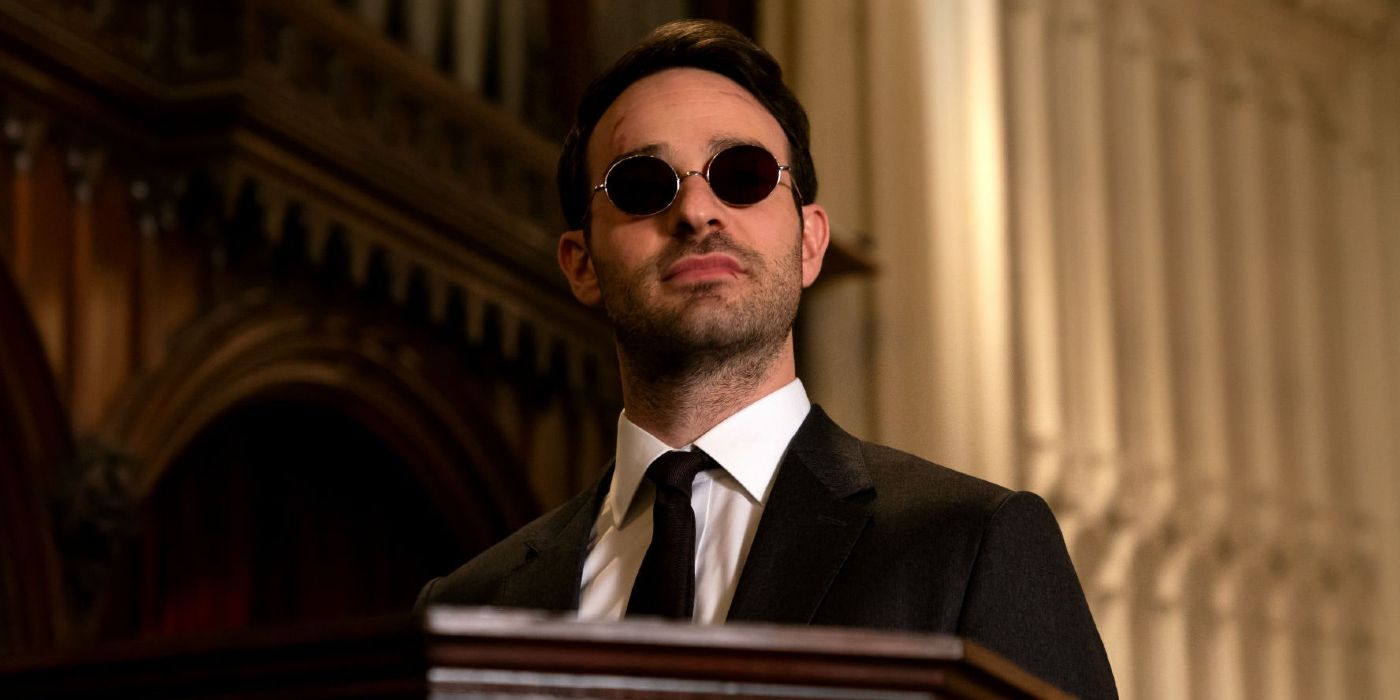 
Daredevil‘s nuanced depiction of faith feels as genuine and bruising as a physical blow from the protagonist himself. Other mainstream stories tend to favor two-dimensional, catchphrase-like platitudes (think Bruce Almighty) or manipulative, exclusionist villainy (Margaret White in Carrie), but Matt Murdock’s (Charlie Cox) spirituality is dynamically fleshed out and a surprisingly honest depiction of real-world belief: profound, complex, and as painful as it is rewarding. And while many, many stories have featured Catholicism over the decades, this careful authenticity makes Daredevil a potently accurate representation instead of lazy caricature.

First appearing in 1964, Daredevil was created by comics legend Stan Lee and artist Bill Everett. The character’s origins are almost identical to the live-action series, where a spilled radioactive chemical blinds a young Matt Murdock. With time, Matt learns how to heighten his other senses to compensate for his eyesight and subsequently transforms into “the devil of Hell’s Kitchen.” Despite the semi-ironic title, Matt lives to protect his city and its everyday citizens whether as a costumed vigilante or as a professional lawyer. Lee and Everett also created Matt’s law firm partner, Foggy Nelson, and his on-and-off girlfriend Karen Page.

After Lee left the series in the 1970s Daredevil saw hand-offs between several writers, and although those runs birthed iconic storylines (Matt romancing Black Widow, the introduction of Ben Urich and Bullseye), no writer proved as influential to the character’s future as the one and only Frank Miller. Miller darkened the series’ tone and incorporated Matt’s martial arts mentor, Stick, as well as Elektra, the master assassin with gray morality and intensely romantic ties to Matt. Other distinguished writers over the decades include Ann Nocenti, Brian Michael Bendis, and filmmaker Kevin Smith.

In Marvel’s Daredevil, Matt Murdock Is Inseparable From His Religious Ethics

To what degree Matt’s religion mattered in the above stories fluctuated over time. For the television series, not only is Matt Murdock inseparable from his religious ethics, each season also synchronizes his arc with key tenets of the Catholic faith. The pilot wastes no time centering his fraught relationship with the church by introducing an adult Matt while he takes confession. Regarded as one of the sacraments, confession is a complicated emotional experience. By admitting their sins and asking for forgiveness, practitioners expose their truest selves to an esteemed religious figure as much as they confront the darkness of their own thoughts or deeds. After Matt recites the traditional (and thematically appropriate) “Forgive me, Father, for I have sinned,” the audience learns he’s visiting his childhood parish, his Catholicism stems from his grandmother, and he’s as messed up as they come. Here he is, in a house of God, telling a man of God that the Devil’s rage lives inside him while resolving to commit acts for which he needs preemptive forgiveness. It’s obvious from Charlie Cox’s twitching fingers and stumbling words how terrifying but necessary Matt finds this moment. Before any fight scenes, the superhero begs for absolution. If the series grounds its storytelling in a smaller cast and street-level stakes, Matt’s grounded in a doctrinal reality authentic enough for any Catholic to recognize.

From this perspective, it makes perfect sense for Matt’s establishing moment to represent an impassioned one-two punch of facing himself and facing God. Moreover, Matt believes using his superhuman abilities to protect others is God’s will and his version of the corporal works of mercy (Matthew 25:31-46: Christ’s servants will devote themselves to helping the hungry, the homeless, and the sick). His sense of justice is so profound, he can’t help but assign his existence divine motive when he sees a Hell’s Kitchen that God left to rot.

In Season 1, Matt Feels as Cursed by God as Called

Which leads to the other side of the proverbial coin and Season 1’s central conflict: Matt feels as cursed by God as called. The satisfaction he derives from punishing criminals doesn’t feel Christian, and his indecision over whether to kill Vincent D’Onofrio‘s Wilson Fisk certainly isn’t.

Or is it? The more damage Fisk inflicts and the more disturbed Matt’s mood, the more grace and wisdom he seeks from his parish’s latte-offering Father Lantom (Peter McRobbie). The two’s riposting debates are as ancient as religion. Why does humanity exist; why a supposedly loving God allows evil to ferment; whether the Devil walks among us (1 Peter 5:8), and is a righteous man’s sacrifice worthwhile if it stops Satan from harming others? These are all universal religious experiences. And like real life, consulting sacred texts only goes so far. Truly walking the talk of faith is a tenuous two-way street where there are endless questions about a broken world hand-in-hand with a place of solace to rest from the lack of easy answers. It requires, well, faith. Matt’s well aware committing murder constitutes a sin grave enough to eternally damn his soul (a Catholic’s greatest fear) but rationalizes it as necessary. If God the Father created him, then didn’t He imbue Matt with these vicious impulses?

Matt Actively Struggles, and That Gives his Faith Teeth

To paraphrase Coldplay, nobody said faith was easy, not even the Bible: a person adhering to Christ’s principles despite their suffering is what creates perseverance, character, and hope (Romans 5:3-5). It’s only when Matt stands in direct opposition to the murderous Fisk — choosing the long, arduous road of suffering — that the role of Daredevil crystallizes. Many believers occupy a thorny space between the comfort Catholicism gives and the meme-ified but traumatic guilt, and Matt staying the path of the righteous demonstrates the joyous and wearying consequences of belief in equal measure.

Religion Takes a Back Seat in Daredevil Season 2

In Season 2, Matt’s evolution is inextricably tied to the arrivals of Frank Castle (Jon Bernthal) and Elektra Natchios (Élodie Yung). The audience sees Matt assured in his convictions; the man who grappled with murder now tries to personify Christ by saving Castle’s fallen soul. The Punisher doesn’t want a savior. Neither does Elektra, Matt’s college girlfriend, who kills with the same remorseless ease responsible for their breakup. Their synergy nevertheless tugs the other’s divergent morality into a nebulous middle. If Elektra’s wild irreverence distracts him from Hell’s Kitchen, then Matt’s unwavering respect for life inspires Elektra to die in his arms after taking a blade for him. The Defenders goes farther by wedging them on opposite sides of a war, and Matt stays with a resurrected Elektra while explosives decimate the building around them.

Naming Elektra a corruptive influence feels icky from a feminist perspective, and Matt deserves happiness beyond being Hell’s Kitchen’s bodily battleground. But Elektra subsumes his focus enough to topple him back into the valley of the shadow of death (Psalms 23). Viewers can’t fault him because Matt never stumbling would be as dishonest as the prosperity gospel. Goodness is a dichotomy: it demands a consistency no human can flawlessly achieve, because humans are inherently flawed. Watching Matt fall from his restorative faith is harrowing and legitimate.

People familiar with the religion might recognize several apostolic parallels in season three. Matt himself identifies with Job, the perfect servant who refused to renounce his faith even after God “tested” him through physical and psychological torment. Losing Elektra and his abilities proves too much for Matt to withstand. Feeling abandoned, purposeless, and spiteful for it, Matt scorns his former convictions and takes up the Daredevil mantle to stop a newly freed Fisk his way — by killing him.

It’s an arc so scorchingly potent that any practitioner who’s questioned or abandoned their faith might as well look in a mirror. There’s a biting substance in the honesty that few are as dutiful as Job and more likely to be Thomas, the skeptic immortalized for his doubt. Yet the funny thing is how doubt isn’t just entirely human but entirely Christian. Mother Teresa wrote about feeling repulsed by her disbelief, and Pope Francis, Saint Peter’s infallible successor, declared, “The great leaders […] like Moses, have always left room for doubt.” If even Jesus can cry out, “My God, why have you forsaken me?” then Matt Murdock can scream the agonized same.

With His Faith Shattered, Matt Must Rebuild Himself

Much like Jesus weeping bloody tears in the Garden of Gethsemane, Matt’s apotheosis is his tortured fury after he stops just short of beating Fisk to death. Everyone said he can’t atone for murder, yet it’s the pleas of Vanessa (Ayelet Zurer), Fisk’s wife, that force Matt to reaffirm his true self. Daredevil heard a cry for help and remembered why he chose the hard road of belief, which culminates in Matt’s moral resurrection.

After a journey of absolution, Matt acknowledges that “the tragedy of being human” is how we’re incapable of seeing God’s design in full. These endless questions of why and how arise from mortal citizens of the universe rather than its immortal creator. It’s a realization that isn’t easy to swallow and, for some, irreconcilable. For Matt, it’s a lesson in healing — only when he accepts religion on his terms, dragging his beaten self back to God even when he’s angry and reluctant, does he find peace. Catholicism holds the answer to his conflicted selfhood as neither a malevolent devil nor an avenging angel but a human in between like everyone else. Becoming the man without fear feels earned, and Matt’s pilgrimage depicts religion as the intricate monument it is: frightening, exhilarating, and messy while beautiful — warts and all.