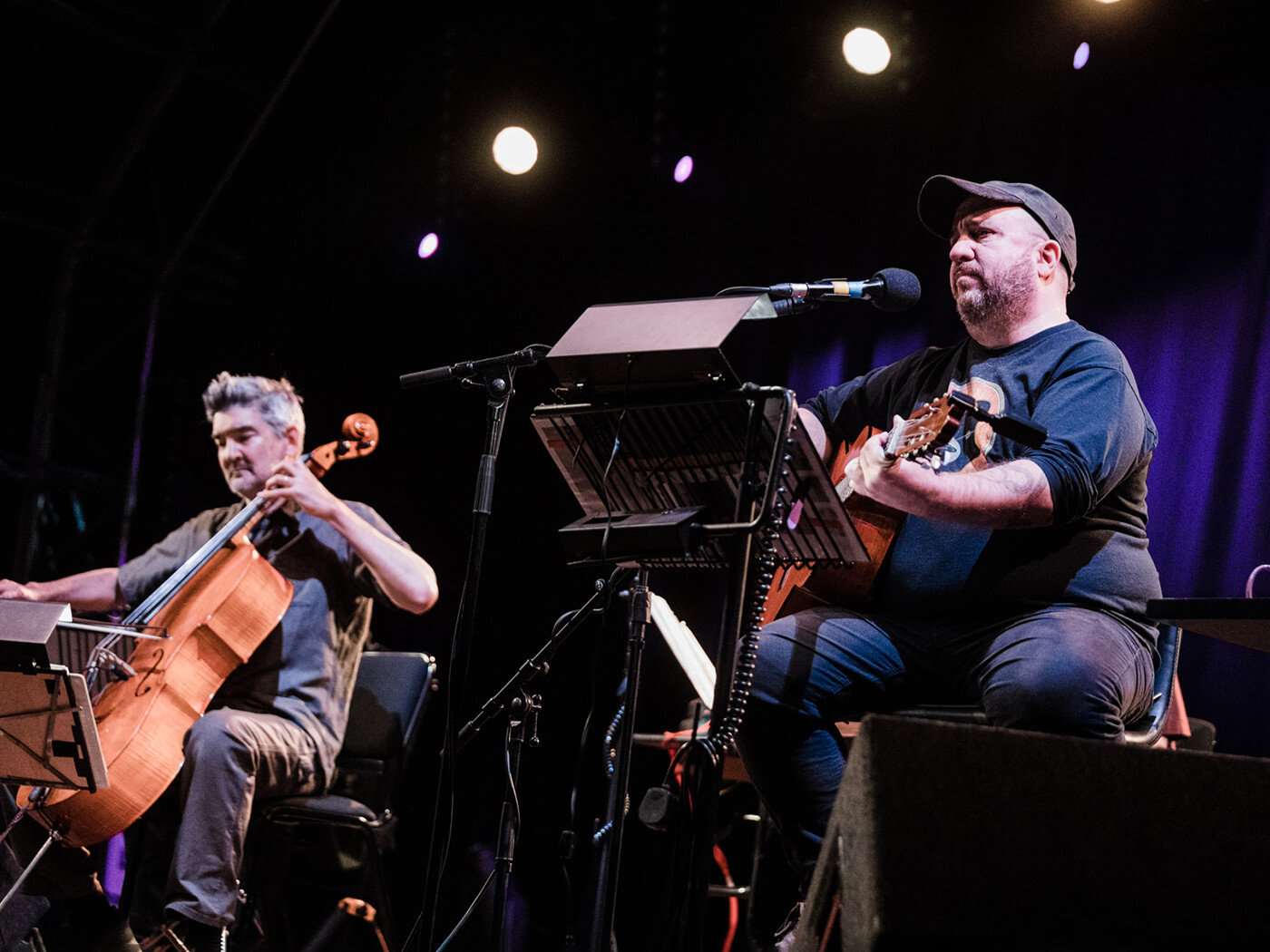 
Like tentative wildlife, they make cautious appearances; peeking from the undergrowth, withdrawn but aware of their rarely-seen beauty. If you’re up early enough you might catch them soundchecking on the Garden Stage, chirruping snippets of “Desert Island”. Mid-afternoon, if you’re skilled at following their tracks or are in with the serious hunters, you’ll spot them briefly on the Piano Stage in the woods, playing the 30-second “Castles Of America”, a stripped down acoustic “The Luckiest Guy On The Lower East Side”, “All The Umbrellas In London” and a cranky cover of Thunderclap Newman’s “Something In The Air” delivered by their guitarist at the piano in what we’ll call an “optimistic” key.

The Magnetic Fields have arrived at End Of The Road 2022, preparing for their titanic bill-clash with Pixies, and a certain portion of the EOTR crowd, somewhat ironically, feel their electricity in the air. Anticipation for the world’s greatest chamber pop delights adds a certain frisson to the day; opening the Garden Stage, Yasmin Williams’ plucked, tapped and bowed melodies trip all the sweeter from the neck of her laid-flat guitar.

On the Woods Stage there’s additional charm to The Umlauts’ groove-laden post-punk chants of “hungover!”, and to Los Bitchos dedicating psychedelic go-go instrumental “Lindsey Goes To Mykonos” to Lindsey Lohan, offering her a free T-shirt and a tequila shot if she happens to be here.

Kevin Morby takes the task of warming up the Garden Stage for Team Merritt very seriously indeed. In a frilled golden cowboy jacket, and at a mic stand bedecked with roses, he charges through firebrand sax-rock aplenty in the shape of “This Is A Photograph” and “Rock Bottom”, transforms into the canyon Lou Reed on a roar through “A Random Act Of Kindness” and builds the mirrorball blues of “Five Easy Pieces”, with its memorable romantic declaration that “you fuck like a monster but you still drive me wild”, to a microphone-flinging wig-out. Compared to the plentiful, muscular material from this year’s This Is A Photograph album, more laid-back numbers like “Campfire” and a tropical saunter through “City Music” feel like the flashbacks of a rock god to their stoner youth; this time round, Morby’s grooves have grown elemental.

Perfume Genius, meanwhile, is busy turning the Woods Stage into a demonic cabaret. Bathed in red light and wrapped in a voluminous chiffon top, he plays mouthpiece for the devil’s idea of orchestral balladry and salsa funk party music. At his most maudlin and dramatic he sounds like The xx have corrupted the soul of a ‘50s crooner, while the stabbing synths and impish falsetto of “Grid” make for a gory glam rock, complete with a chorus of screaming blue murder. “Queen”, with its glorious electro fuzz and fire siren chorus, is perhaps synthpop’s most glowering showstopper.

Back in the Garden, though, the faithful gather close. The Magnetic Fields have broken cover, bearing ukuleles, acoustic guitars and Sam Devol’s centre-stage cello, and their every squeak and motion is exquisite to witness, right down to lugubrious mainman Stephin Merritt’s only “dance” move, spinning once in his chair during “A Chicken With Its Head Cut Off”.

It’s an evening not short on wonders. The sublime synth country lollop of “I Don‘t Believe In The Sun”. “Andrew In Drag”, synthpop on record, here stripped down to its Regency undergarments. The swelling emotions of “All My Little Words” and “Grand Canyon”, Merritt’s voice as deep and majestic as the geological feature itself. The moment actual frugging breaks out as they launch into their Broadway high-kicker “The Luckiest Guy On The Lower East Side” with guitarist Anthony Kaczynski manfully recreating Dudley Klute’s original vocal tour de force. They may grumble between themselves about an unexplained buzz in the monitors but the sound is richer here than at their own (stupendous) Hammersmith Apollo shows this week; tracks like “The Flowers She Sent And The Flowers She Said She Sent”, “All The Umbrellas In London” and “Quick!” – a song that masterfully strips away everything besides the repeated hook – arrive with all of their bubbling electronic quirks attached.

Merritt’s pure alt-country/folk melodies rank among the greatest ever written, but what elevates him into the pantheon of leftfield gods is his almost casual ability to melt arch wit into profound emotion. A stark and stunning “The Book Of Love”, on baritone and banjo alone, is plaintively comedic on its own (“the book of love is long and boring, no-one can lift the damn thing”) but, to much laughter, Merritt then piles straight into “The Biggest Tits In History”, his recent tongue-in-cheek tribute to competitive bird breeding. Indeed 2020’s Quickiesalbum, a collection of 28 largely sub-two-minute songs, provides most of the laughs. The bold chorale “The Day The Politicians Died” – envisioning a politico-free world where “it’s all one big party now”, and suggesting “we’ve got the taste for blood, now let’s eat all the priests” – is met with celebratory whoops, and “Death Pact (Let’s Make A)” was inspired, Merritt explains, by Alice Cooper renewing his wedding vows “in a very Alice Cooper way”.

Having charmed us out of our minds with what must surely be amongst EOTR’s finest ever sets, Merritt then breaks every heart in a five-mile radius with “’14 I Wish I Had Pictures”, a track from the closing throes of 2017’s autobiographical 50 Song Memoir album about the fragility of memories and the corrosions of age. As a song it’s quintessentially Merritt: quietly staggering.

Catch up with the rest of Uncut’s End Of The Road 2022 coverage here: