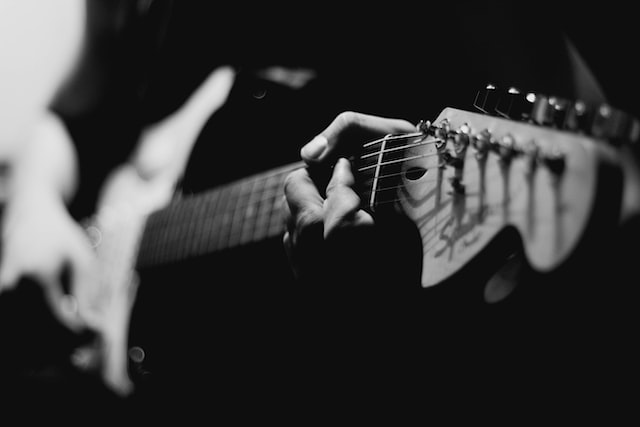 
Would you sell your soul to the Devil in exchange for fame, fortune, and a name that will live on past you?

That’s what Robert Johnson did…or so the urban legend goes! But the story ends not so happily, as apparently making a deal with the Devil is a bad idea.

But where does this story come from? Who was the real Robert Johnson? And what does the Devil have to say about all these rumors?

We’ll discuss the truth about Robert Johnson and the Crossroads story in this exclusive article for Home Town Station.

Who Was Robert Johnson?

The real Robert Johnson was a blues musician who made recordings throughout the 1930s. Contemporaries say he was a master of the Delta Blues style and traveled across the country to play on street corners, juke joints, and other dance halls.

Despite making two recording sessions and 29 songs, Robert Johnson never achieved mainstream success until after his death, besides his local touring.

His life was not well documented compared to most musicians, and so it was easy for people to get carried away with urban legends about him and that deal.

Sadly, Robert Johnson’s career took off after he died in 1938, to the extent that he was requested to play Carnegie Hall after his passing, among many other deals that were far too late. Many in the music industry hadn’t realized that Johnson had passed away.

Legend says that a young Johnson was approached by the Devil somewhere on the Crossroads of Route 49 and 61 near the Dockery Plantation in Mississippi at midnight.

The Devil takes Johnson’s guitar, tunes it, and in exchange for his soul, he gives the young man a chance to play the blues better than anyone else. From there Johnson catapulted into fame and furiously played the blues until his death, which was part of the Devil’s contract. The only catch? Fame wouldn’t come until much later.

That’s right, the urban legend assumes that Johnson had no talent, was a womanizer, and that he was too much of a loner in the industry to succeed. Not the most flattering depiction of a man who was, by all accounts, extremely talented and hard-working when he toured!

Johnson’s own son Steven, a preacher and musician in his own right, says that the myth makes no logical sense. “Why would you go to the crossroad to sell your soul to the devil and be asking God to save you at the same time? The two just don’t go together.”

One popular theory is that since Blues was controversial in the 20th century, and often called “The Devil’s Music” to begin with, Johnson’s remarkable talent fueled superstition.

One blogger commented that the “crackly, distant sounds of early Delta blues recordings have a kind of supernatural quality to them,” which probably fired up those Devil allusions.

Naturally, the fact that he sang songs with religious symbolism like “Cross Road Blues” and “Me and the Devil Blues” probably hyped up or even started the rumors.

Speaking of the blues, read the history of Mississippi Delta Blues music to learn just why some of these songs had such dark and iconic imagery.

The Death of Robert Johnson

Johnson died tragically young at the age of 27 in Greenwood, Mississippi. The fact that he died from “unknown causes” definitely sounds suspicious, especially considering that the death certificate doesn’t list any cause of death, and no autopsy was performed.

Theories about his death include contracting congenital syphilis, being murdered by a married woman’s jealous husband, or even being poisoned by strychnine in a bar.

By most witness accounts, Johnson did suffer from severe pain for days, lending credence to the idea he was poisoned, contracted a debilitating illness, or perhaps suffered from a disease, like Marfan syndrome, which involves unusually long fingers like Johnson was said to have.

Whatever the case, Johnson’s music outlived him and to this day he has sold 1.5 million copies while remaining one of the first names anyone mentions when discussing the early blues.