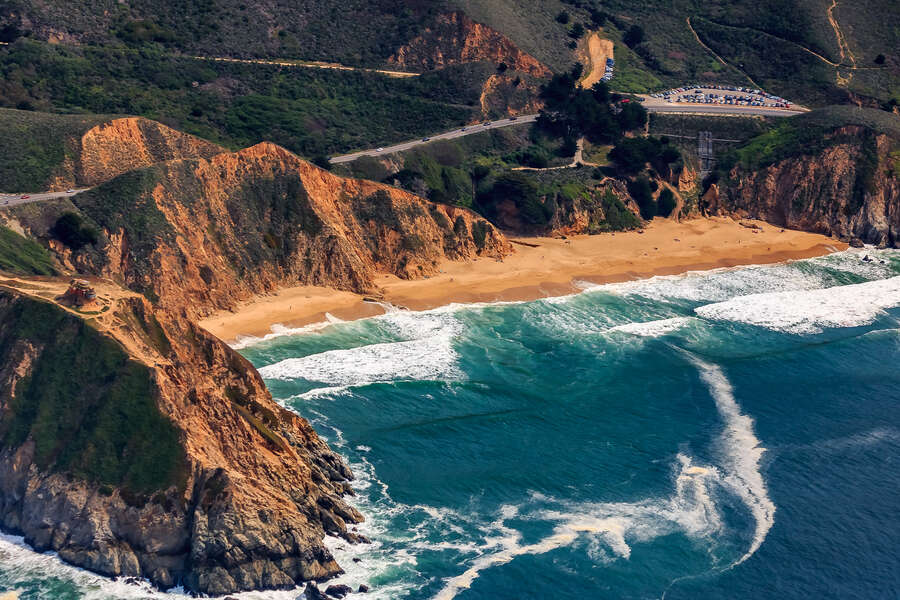 Tucked along a six-mile stretch of the Pacific Coast, between San Francisco and Half Moon Bay, lies the chill beach town of Pacifica. Incorporated in 1957, the town got its name from a contest, and means “peace” in Spanish. Only a 15-minute drive from the city, a day trip to the beach feels worlds away as you come into a birds-eye view of rolling ocean waves while cruising down the coastal curves of the Pacific Coast Highway.

Yes, there’s that Taco Bell Cantina, a gorgeous wooden structure on Linda Mar Beach, complete with a beachside walk-up window, patio, and boozy drinks. But there’s so much more, from whale watching to an earthquake-proof castle to one of the best live music venues in the Bay Area. Below are just some of our P-Town favorites, though honorable mentions go to Gorilla BBQ, Puerto 27, Oceana Market, P-Town Birrias, Miss Tomato Sandwich Shop, Colombo’s Deli, Top Pot, and Sunde White Industries’ gift shop.

Weekend traffic slows down closer to Linda Mar, so be patient, bring a jacket, and don’t be surprised when the fog rolls in. Here’s how to spend a perfect day in Pacifica:

The pier closed for a portion of the pandemic due to wave damage, but reopened in 2021 with the L-shape section closed off. It’s still great, and a stroll along the coastal walkway on Beach Boulevard at Sharp Park Beach isn’t complete without a turn down the 1,140-foot pier to Chit Chat Cafe. Pass by crabbers and anglers who hang out all day with family and friends, potluck-style. If you’re looking to catch dinner yourself, pick up bait from Good Luck Bait and Tackle or Sharp Park Market (where you can also rent e-bikes for $10 an hour). The end of the coastal walkway connects to the flat 1.4-mile Promenade to Mori Point Road, part of the Coastal Trail that passes by Sharp Park Golf Course, where you can take a wheelchair-friendly stroll and birdwatch. Alternatively, turn up Clarendon Road at the end of the walkway to grab a Green Eggs and Ham Bagel Sandwich from Perfect Pour Cafe and loop back via the cute Palmetto Avenue.

Many would characterize Pacifica as a surf town, and the majority of the action goes down at Linda Mar. If you’re a beginner, check out Surf Camp Pacifica or Brown Girl Surf. Or you can just watch the surfers hang ten from the beach, either on a regular day or during one of the competition days that range from the Grom Fest youth surf competition to what may be the most popular of all—the World Dog Surfing Championships. Bonus: it’s right next to that Taco Bell. Or hop to the complex next door to Soul Grind for excellent coffee and toasts (though be prepared to wait) or Humble Sea Brewing for plentiful outdoor seating and the best veggie burger in Pacifica.

The History of Tailgating

Whale season generally runs April through December, and the best views for it from the Pacifica coastline are during the gray whale migration from February through April. Still, it depends on the species of whale, with blue whales often spotted during late spring and fall, and a small population of humpback whales migrating in the summer and fall. Grab your binocs to whale watch from multiple trails and beaches in Pacifica, like the pier, Mori Point, Rockaway Point trail, Linda Mar Beach, and Devil’s Slide walking trail.

A castle in the suburbs? You betcha. Originally built as an earthquake and fireproof private home in 1908, the property has since been used as a medical facility, restaurant and speakeasy, and Coast Guard communication center. Tours of the castle, which run 90 minutes, are set to reopen in September and are led by Bridget Oates, author of Sam’s Castle. Or go for the monthly music salons on weekend evenings, from Latin Arabian sounds to chamber jazz.

Palmetto is like a low-key downtown of central Pacifica, located in Sharp Park. It has a bunch of shops and cafes worth checking out like The Living Room Plant Company, three vintage shops, Florey’s indie book shop, the gluten- and dairy-free Saltwater Bakery, and Shampa’s Pies. There’s also the best-named mom-and-pop Vietnamese eatery is Kitten and Pinky, with a Shrimp Mayonnaise Sandwich that’s loaded with generous amounts of cheese and scallions and melted onto a toasted Vietnamese-French baguette. Intertwine Cafe (formerly Kizler Coffee, in a new location), offers seasonal lattes, has local art for sale, and hosts local vendor pop-ups in the back patio. An informal cannabis row has formed in recent years, with local favorite Lytt, Phog Center, and an outpost of Bloom Room. Two more dispensaries live south in Rockaway Beach—the friendly Seaweed Holistics, one of the few Black-owned businesses in town, and the tiny Coastside Cannabis.

Nothing screams Pacifica pride quite like the annual Fog Fest, which will make its triumphant return during the weekend of September 24, after a two-year pandemic hiatus. Along Palmetto Avenue, experience Pacifica’s retailers, artists, and restaurants as they bring their best to the street, all set to live music. Yes, there will also be a parade. And try the signature Fog Cutter cocktail, a very sweet, tri-colored rum concoction that you can get in a gorgeous Art Deco-themed souvenir glass.

The beauty of the 2.5-mile Mori Point Loop Trail is that there are several options for all skill levels. Keep your hike to an easy walk along the coast, go to Laguna Salada pond to see red-legged frogs, or work your quads in steeper and windier inclines to the actual Mori Point for rewarding 360-degree views. It’s also a great trail to see wildflower blooms in the spring. There are a ton of other hiking options in Pacifica, though Devil’s Slide stands out for mountain bikers and dog owners. Sweeney Ridge is preferable for a longer, more rigorous hike, or Milagra Ridge for wildlife lovers.

Live music or live something every damn day — sometimes twice a day. An increasingly rare type of venue, Winters doubled its performance space by keeping its outdoor patio and stage, with some matinee shows played outside. From local surf rock bands to traveling harpists, Winters hosts talent both famous and unknown. There’s a decent craft beer selection on tap, and weekends usually see a rotation of food vendors slinging barbecue or Neapolitan pizza. For more local boozing, look to Tripp Distillery for weekend tastings, Surf Lounge for the strongest drinks of your life, Table Wine for spritz happy hours, Longboard Margarita Bar for live reggae bands, and A Grape in the Fog for tasting collaborations with local chefs.

On the Pacifica-Daly City border, go up to Mussel Rock Park to watch paragliders take off from several launch points along a series of trails. You can set up a picnic at a table in the park lot area and stay put while watching, or actually hike along the trails and see what you come across. For something decidedly less airborne, set up a folding chair, easel, and paint the oceanscape from an almost birds-eye view. Another option for watching paragliders is to go down the steep ramp from Esplanade Avenue and West Manor Drive to Esplanade Beach, where the paragliders take off from overhead.

Pacifica lays claim to the original Jack cheese recipe that apparently predates Monterey Jack. The Pacifica Historical Society makes its own and sells it at the museum, which is housed inside a building called The Little Brown Church. It’s so popular, the society has already sold more than three tons of the stuff. Look out for the possible return of the Pacifica Jack Cheese Contest next April. You can also learn about the rest of P-Town’s history at the museum, from the original Ohlone people to present day.

Rockaway Beach is a one-stop shop for visitors, as there are three hotels, trails, restaurants, and shops (and beach, duh) all within walking distance of each other. Breakers is the most beloved brunch spot in town, with a cozy 1950s diner feel and huge pancakes. Nick’s and Moonraker boast oceanfront seafood dining with that old-timey feel. Lovey’s Tea Shoppe is the laidback little sister to SF’s Lovejoy’s Tea Room, with an outdoor patio. The Mostly Rock ’n’ Roll Gallery houses photos of legends like Prince and Bruce Springsteen by local photographer Steve Rapport. The small, but robust Coastside Farmers Market occurs every Wednesday from April to December, with organic produce, baked goods, hot prepared foods, and fresh flowers. You can also hop on the Rockaway Point Trail for an easy 25-minute walk south to Linda Mar State Beach.

As if the beach and hiking weren’t already beautiful enough, Pacifica also has a gorgeous orchid nursery that overlooks the ocean. Only open on the weekends, appreciate the fragrant flowers, especially rare and at-risk orchid species, that botanical gardens nationally source from this nursery.

Two words: Derby Cake. Choose the white and chocolate cake combo that sandwiches a layer of strawberries, bananas, and fresh whipped cream. Lines are often out the door for the 58-year-old bakery’s dizzying array of sweet treats like donuts, cookies, cannolis, pastries, pies, and other cakes for all occasions. Prices are reasonable for the Bay Area—one of just a few places left around here where you can still get an apple pie for $15. A short distance away is the artisanal Rosalind Bakery, which fills a niche for locally baked bread (try that Coastside Sourdough), third-wave coffee, and amazing housemade pimento cheese slathered onto a breakfast sandwich.

Margot Seeto is a Bay Area freelance writer and a contributor for Thrillist.