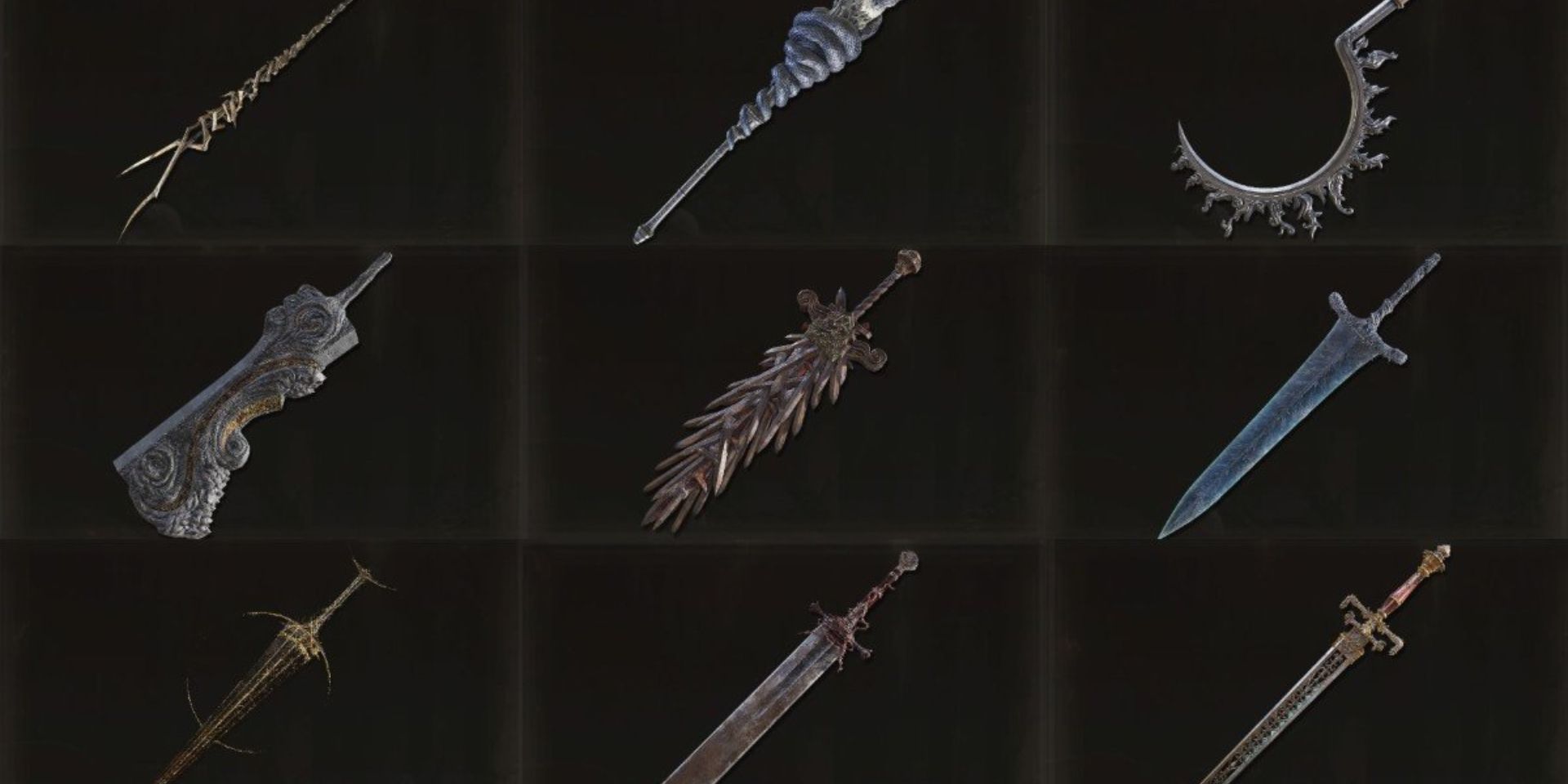 
The action RPGs published by FromSoftware have always given players a huge array of character customization options; Elden Ring in particular is chock-full of aesthetically pleasing armor sets, flashy spells both sacred and profane, and an armory’s worth of weaponry inspired by historic medieval armaments and the weapons of fantasy fiction. There are, however, a few pre-modern weapons that have been left out of Elden Ring‘s repertoire, weapons that developers at FromSoftware could easily add to the game with future DLC.

Much like the worlds of its predecessors in Demon’s Souls and Dark Souls, the primary setting of the Elden Ring action RPG, the Lands Between, is heavily flavored after the cultures of pre-modern Europe. Many early-game and underrated Elden Ring weapons – rapiers, maces, scimitars, pikes, longbows, crossbows, zweihanders – are deliberately modeled after the real-life designs and proportions of medieval/Renaissance weaponry and act as grounded contrasts to the larger, magical, and downright fantastical weapons introduced in Elden Ring‘s late game.

Inevitably, certain mythical and historical weapons won’t be included in any future version of Elden Ring, due to limited development times and issues implementing them in Elden Ring‘s current combat system. There are, however, a few weapon archetypes that could easily fit into Elden Ring‘s existing catalog of weapon types, along with weaknesses in certain character builds that DLC weapons could amend.

The Twinblade weapons of Elden Ring were first introduced in Dark Souls 2 (along with Dark Souls 2‘s fan-favorite “Power-Stancing” game mechanic). Most of the Twinblades in Elden Ring‘s base game aren’t modeled after any real-life polearms in particularly, instead seeming to draw inspiration from the double-bladed energy sabers seen in sci-fi franchises like Star Wars. The twirling move-set of Twinblades, however, does have a basis in the staff-fighting techniques traditional to many martial arts systems across the world. The introduction of blade-less DLC staff weapons such as quarterstaves, bo staves, or fighting canes could give Elden Ring players a new blunt-force weapon class while also making cosplay builds of fantasy characters such as the Monkey King Sun Wukong from Black Myth: Wukong much more viable.

When creating character builds during a campaign, players of Elden Ring who don’t want to rely on Glintstone Sorceries or Incantations still have access to a wide variety of ranged weapons drawn from both history and fantasy. There are short recurved bows designed to be used on horseback, long-bows and Great Bows made for ranged sniping, crossbows that can be fired one-handed, and even two primitive firearms – the archaic-looking Jar Cannon and the One-Eyed Shield with its flame-spiting mouth mortar.

There are a few historic weapons that don’t quite fit into any of the archetypes listed above, but could probably be introduced in Elden Ring’s future DLC without disrupting gameplay balance. Stone-hurling weapons such as Slings or Sling-Staffs could give players access to a new type of ranged weapon while also letting FromSoftware introduce new item-crafting options (sling bullets made from glowing ruin fragments, crystals, meteor fragments, half-cooled magma, etc). Javelin and dart-hurling stick tools such as the Pre-Columbian atlatl could become the basic of new melee/ranged hybrid weapons in Elden Ring, letting player clobber foes with one-handed attacks, then launch arrows and bolts at distant targets with the two-handed weapon skill. Finally, DLC could introduce a few more gunpowder type weapons to the game without making Elden Ring feel like Bloodborne 2.0; history is full of examples of primitive hand-cannons, fire-lances, and primitive rocket launchers that co-existed on the battlefield with traditional medieval methods of war.

Related: Elden Ring: What Really Lies Outside The Lands Between

Most Glintstone Sorceries and Incantation magic spells in Elden Ring are empowered by a character’s Intelligence score (the attribute of D&D-style wizards) or their Faith score (the attribute of D&D-style priests/clerics). There are, however, a few magic spells that require heavy investment into more than one magical attribute. Death Sorceries, Magma Sorceries, and Golden Order Incantations require high scores in both Intelligence and Faith, while Blood Incantations, Elden Ring Dragon Communion Incantations, and Clayman Bubble Sorceries require investment into the Arcane stat along with one of the other primary magic attributes.

The main world of Elden Ring is full of weapons, Ashes of War, and damage types that scale with either Intelligence, Faith, or Arcane, giving players who create characters focused around a single magical attribute melee attack options not reliant on Strength or Dexterity. Currently, however, there is only one weapon in Elden Ring‘s game world that scales with both Intelligence and Faith (the Sword of Night and Flame) and no weapons/Ashes of War with Intelligence/Arcane or Faith/Arcane scaling. If future DLC introduces new magical or weird weapons to Elden Ring with the attribute scales mentioned above, players who create “Int/Faith,” “Int/Arcane,” or “Faith/Arcane” mage characters will gain access to many more interesting combat approaches.

Fans of class-based fantasy tabletop RPGs like Dungeons & Dragons can easily create a Fighter, Rogue, Wizard, or Cleric inspired character build in Elden Ring‘s main game. There are just three in-game tools, however, for Elden Ring players who want to make characters inspired by the D&D Bard class or the minstrels of myth and history. The obscure Elden Ring Harp Bow painting reward weapon has multiple strings and makes musical notes when arrows are launched with it. The Wraith-Calling Bell chimes melodiously with every ghostly projectile it conjures. Finally, the Envoy’s Horn/Envoy’s Long Horn/Envoy’s Greathorn weapons launch holy bubbles with every warbling note the Tarnished PC blows.

Music and musicians are a strangely beautiful part of Elden Ring‘s gameplay ambiance; the nomadic merchants scattered throughout the Lands Between play ditties on their fiddles to lure customers in, the pages of Leyndell Royal Capital weave haunting melodies with their wooden flutes, and certain winged bat creatures in the open world will sing mournful Latin dirges about the glories they lost. Elden Ring DLC boss weapons modeled after string, brass, or woodwind instruments of these NPCs would not only let players show off their character’s “talents” in front of summoned players, but could also logically justify the creation of new weapon Skills designed to strengthen allies or distract enemies in true Bard fashion.