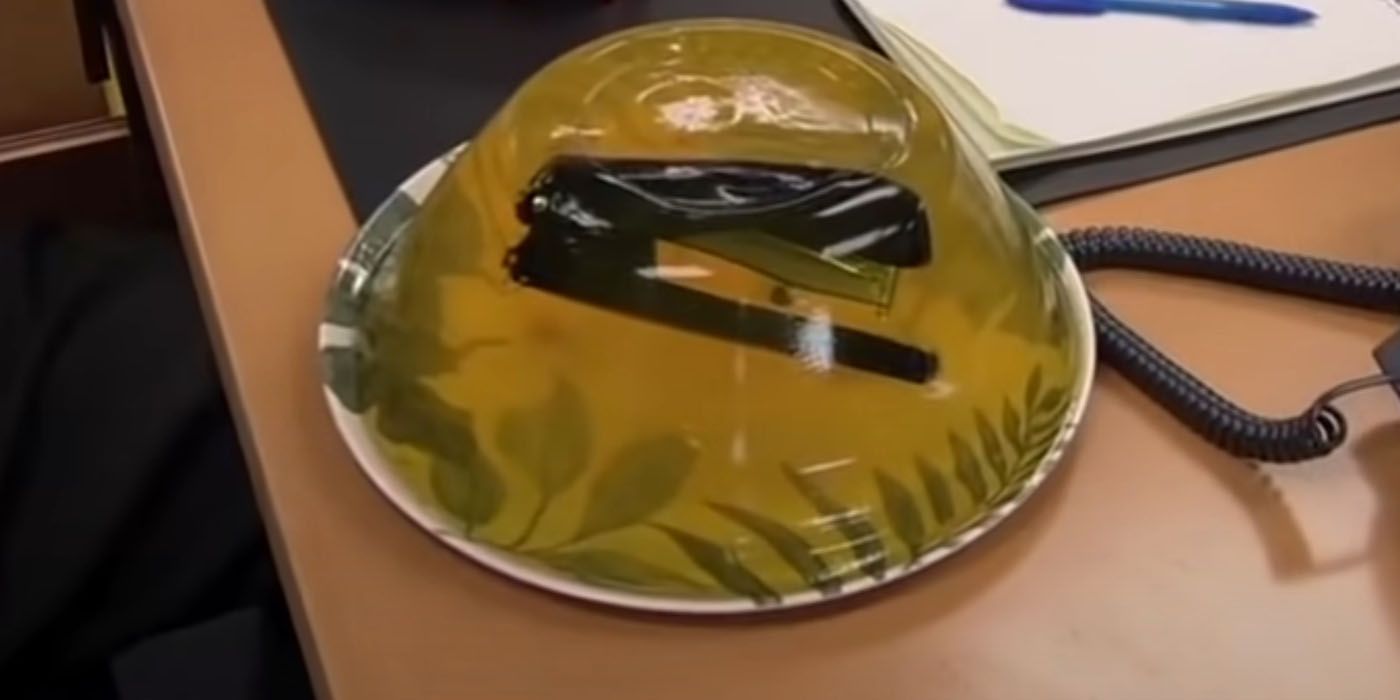 
A Minecraft fan has created a comically large replica of Jim’s infamous ‘stapler in the Jell-O mold’ prank from The Office’s first episode.

Dwight Schute’s stuff has been put in Jell-O again, this time in a fan Minecraft recreation of the stapler inside the Jell-O mold gag from The Office. The Office has been the subject of many fan recreations in gaming, ranging from The Sims to Call of Duty mods. All too often, these recreations of the Dunder Mifflin office have the infamous Jell-O on full display.

In the mid-2000s, The Office was a critically acclaimed novelty in television. While famous interpretations of workplace drudgery like Office Space and Dilbert were memorable in their own right, the impact left by the crew of Dunder Mifflin was incomparable by comparison. Like anything that achieves such popularity, it was only a matter of time before the antics of The Office would find themselves immortalized in a video game homage. And few games have hosted as many fan homages as Minecraft. Since its official release in 2011, Minecraft has been the foundation for several creative fan works, including a Minecraft map combing all the Pokémon regions into one world. From Jurassic Park to historical landmarks, seemingly everything can eventually find its way into Minecraft’s sandbox.

Reddit user Doubleladder86 made another contribution to Minecraft’s sandbox with an homage to Jim Halpert’s Jell-O mold prank from the hit television series The Office. In the first episode, Pilot, an infuriated Dwight Schrute discovers that co-worker Jim encased his stapler in Jell-O. To Schrute’s dismay, boss Michael Scott fails to discipline Jim and instead laughs along with a string of dessert-related puns. In honor of this classic scene, Doubleladder86 used Minecraft to create a ridiculously large gelatin mold housing an equally large stapler that towers over the nearby cows. While Doubleladder86 never stated how the piece was made, commentators speculate that the stapler and base were of solid blocks and that the gelatin was either yellow glass or honey blocks.

The scope of Minecraft creations ranges from Dark Souls-esque fortress megabuilds to Doubleladder86’s giant Jell-O, and no matter the detail or size, these works are no less passionate. In fact, the humble nature of this gelatinous tribute is accurate to the monotonous simplicity that most of the comedy of The Office is themed around. Though based in down to earth humor, it would probably be hard to find a fan of The Office that would oppose Jim creating a giant Jell-O mold containing a large quantity of Dwight’s stuff.

With how beloved The Office was in its prime, it’s no surprise that so many video games have honored its legacy. Though Dwight Schrute may not find Doubleladder86’s work amusing, it still makes a fine addition to the assorted Office fan tributes within the gaming space. Whether through fan-made creations, such as those found in Animal Crossing and Minecraft, or official Easter Eggs, such as Dwight Schrute’s stapler in Dying Light 2, The Office is bound to turn up in more games in the future.