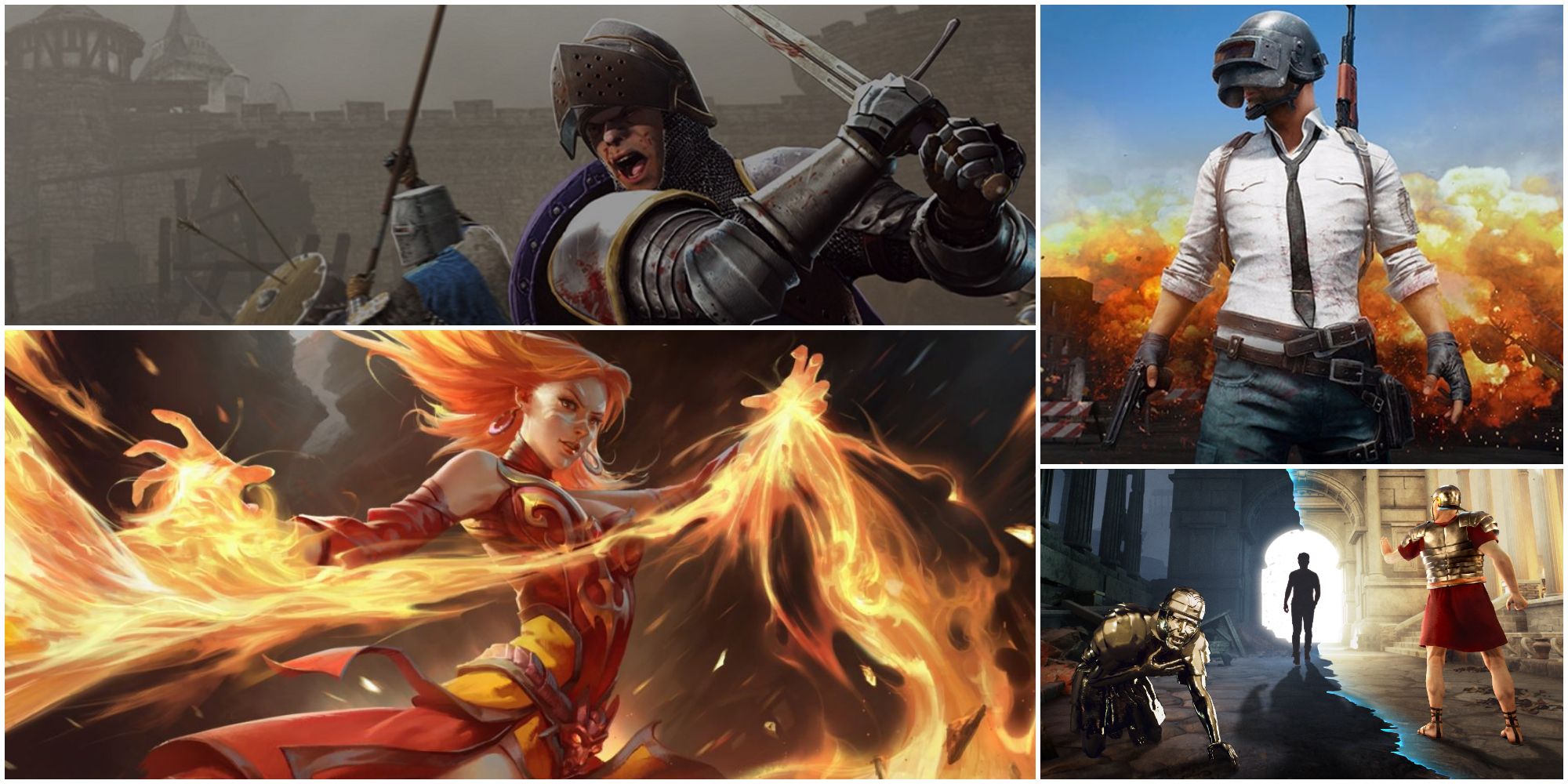 
Mods are an essential part of gaming, especially (but not exclusively) on PC. These days you can find mods for pretty much any game out there, and plenty of them to boot. These range from small modifications that add minor quality-of-life features to highly ambitious projects like the Skyrim multiplayer mod.

Every now and then, you’ll run into mods so impressive that they eventually become standalone games. Not just that, but in some instances the resulting games end up being better and/or more popular than the titles they were originally conceived in. Here are some fantastic examples of mods that became standalone sensations.

10 Heroes Of The Storm (Starcraft II: Wings Of Liberty)

Blizzard missed out on a huge opportunity by not capitalizing on the popularity of Defense of the Ancients (DotA) back when it was still a Warcraft III mod. But the company did eventually launch its own MOBA in the form of Heroes of the Storm, which initially started as a Starcraft II custom map known as Blizzard DOTA.

The game saw some success over the years but was never quite able to compete with the likes of DOTA 2 or League of Legends. This is presumably why Blizzard announced in July 2022 that Heroes of the Storm will no longer receive any future major updates. But even though Heroes of the Storm was hit-and-miss for Blizzard, it was ultimately a trailblazer.

Originally developed as a Quake mod, Team Fortress captured the hearts and minds of many PC gamers back in the mid-90s. The mod also impressed the folks over at Valve who released it as a standalone game called Team Fortress Classic just a few years later. While Quake can be credited with popularizing multiplayer FPS games in general, fans have to give thanks to Team Fortress for inventing the hero shooter subgenre.

The Stanley Parable is a unique narrative-driven game that started as a Half-Life 2 mod. This is essentially the poster child of fourth-wall breaking in gaming. The Stanley Parable is riddled with thought-provoking and amusing commentary about video games and what it means to be the protagonist of one.

The “meta” nature of The Stanley Parable is both its biggest selling point and one of the main reasons why it won’t be to everyone’s liking. Those who love self-aware and self-referential are definitely going to get a kick out of this one. It’s just a shame it’s so short-lived.

Games that start as mods generally still bear at least some resemblance to the original titles. However, there are some exceptions. Case in point: Chivalry: Medieval Warfare, a multiplayer hack-and-slash based on the Age of Chivalry mod for Half-Life 2. Age of Chivalry did a great job at showcasing the power of the Source engine and remains an amazing feat of modding to this day.

This total conversion mod was so good that it only took about a year to turn it into a standalone game. Then it took another decade until Chivalry: Medieval Warfare got a much-needed sequel. Medieval Warfare still has a bit of life left, but its rapidly shrinking player base limits its appeal.

PlayerUnknown’s Battlegrounds (PUBG) was the most popular game around, despite all its technical problems, during its Early Access phase. While still enjoyable, especially if you’re playing with friends, these days PUBG is only a shadow of its former self.

Widely known as the game that popularized the Battle Royale genre, PlayerUnknown’s Battlegrounds couldn’t keep up with more dynamic competitors like Fortnite in terms of updates. To make matters worse, when the developers did start pushing out updates, they perhaps went for quantity over quality. Having said all that, PUBG’s player base is still very respectable.

Half-Life 2 was the first title developed from the ground up for Source, but the game engine debuted a few months prior with a port of the original Half-Life. The aptly named Half-Life: Source was a decent upgrade at the time, but years later modders decided to take things to the next level with Black Mesa.

What started as a mod aimed at remaking Half-Life for modern audiences, eventually turned into a standalone version of Black Mesa. The wait was well worth it, though, because the game ended up being bigger and better than Half-Life in almost every way. It’s certainly showing its age now, though.

Yet another game that started in Half-Life 2, Garry’s Mod is the ultimate physics sandbox. Well, for starters. Truth is, this game can be anything players want it to be. The sandbox mode is the default one, and it allows you to create entire worlds using thousands of assets from a wide variety of other – mostly Source – games. .

The most enjoyable part of Garry’s Mod is arguably the multiplayer. There are countless weird and wonderful game modes to find there that will keep fans busy for potentially thousands of hours. Jumping into random Garry’s Mod multiplayer modes is like entering a wormhole without knowing what’s on the other side. For some, Garry’s Mod is going to be a life-changing experience. For others, a complete waste of time.

When talking raw numbers, no other game out there can hold a candle to The Elder Scrolls V: Skyrim. There are tens of thousands of mods up for grabs for the game, and it’s not uncommon to see people rocking 300-400 mods or more at a time. In fact, over the years, adding mods to Skyrim became as fun as actually playing it. Surprisingly, though, very few Skyrim mods became standalone games. The biggest and best example right now is The Forgotten City.

RELATED: Games You Should Play If You Love Skyrim

Much like Skyrim, The Forgotten City is an intriguing open-world RPG focused on exploration. It takes place in Ancient Rome, has time-looping mechanics, and boasts a narrative that blows Skyrim out of the water. The Forgotten City was the first mod to win a Writers’ Guild award for storytelling and the standalone game won countless more awards since its release. This is hands down the best single-player game that started as a mod, but there are two multiplayer ones that are even better.

Counter-Strike has a long and storied history that dates back to the late 90s. Originally developed as a Half-Life mod, Counter-Strike quickly took a life of its own. To say that the first standalone version of Counter-Strike, the famous 1.6, overshadowed Half-Life would be an understatement. More than 20 years since its initial launch, it remains a contender for the best online shooter ever made.

Counter-Strike evolved over time. The most recent iteration, Counter-Strike: Global Offensive, routinely sits at the top of SteamCharts in terms of concurrent players. It’s easy to love Counter-Strike, warts and all, but there’s another Valve game that just pips it to the post.

DOTA 2 is perhaps the absolute best game that started as a mod. Not just that, but it’s also one of the best competitive multiplayer games ever made and continues to have one of the most impressive eSports scenes. DOTA 2’s The International completely dwarfs other eSports tournaments in terms of prize pools.

The massive success of this MOBA can be attributed in no small part to the popularity of Defense of the Ancients, the same Warcraft III mod that spawned the likes of League of Legends and Heroes of Newerth. However, Dota 2 is the one that stuck the closest to the original formula and is arguably the most complex and challenging game in the genre. This also makes DOTA 2 either the most rewarding MOBA out there or the most frustrating one, depending on player preferences, but there’s no doubt that it has a tremendously dedicated global following.

NEXT: The Best Stray Mods To Dig Your Paws Into