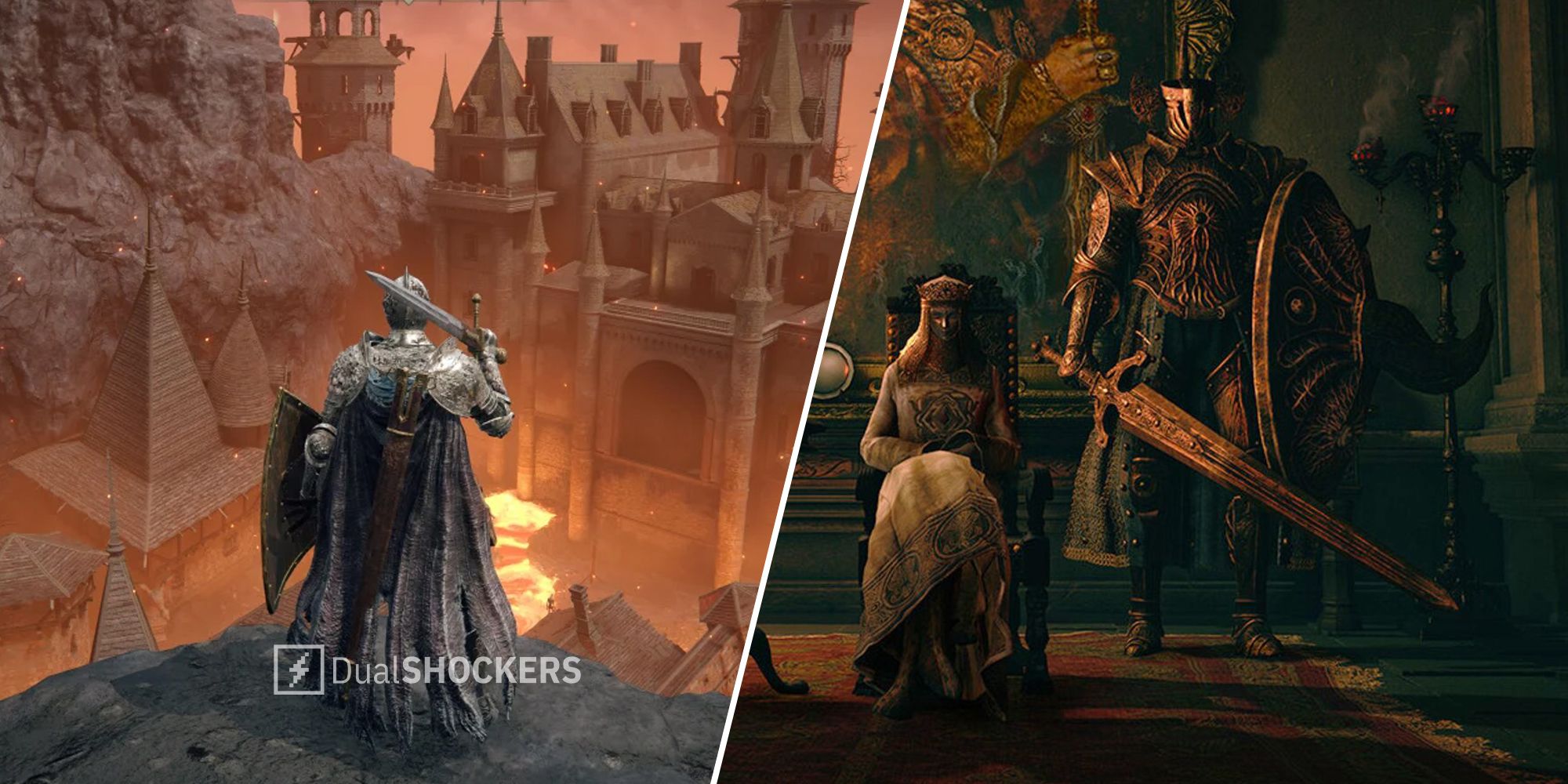 
Elden Ring is full of many fantastical locations spread out across the Lands Between, but few are quite as ominous and foreboding as Volcano Manor. It’s an iconic location, found in Mt. Gelmir, and it serves as a nexus point for several NPC questlines. You will encounter several old and new characters with which to interact.

It can be challenging to reach the location, however, despite the fact that there are several options you can take. This guide will run you through each route, from taking the long path through Altus Plateau and Mt. Gelmir, encountering a secret Abductor Virgin in Raya Lucaria Academy, or following Rya’s questline in Liurnia of the Lakes, you have plenty of fun options ahead.

First, you’ll need to have reached Altus Plateau. Whether you climb up the Ruin-Strewn Precipice or you took the Grand Lift of Dectus, you’ll want to end up at the Erdtree-Gazing Hill site of grace. From the Grand Lift of Dectus, ride directly north until you reach the Erdtree-Gazing Hill site of grace. Starting from here, head north up a thin path. This will take you into Wyndham Ruins and a Tibia Mariner boss fight. Whether you choose to deal with the Tibia Mariner first or just ride past him, head westward through the lower portion of Wyndham Ruins. The path will turn north, and you can rest at the Seethewater River site of grace.

From the Craftsman’s Shack, you’ll want to continue northeast, following the path into Hermit Village. The village is packed full of Demi-Humans and some glintstone sorcerers. At the far end of the village, you’ll face a boss: Demi-Human Queen Maggie. She’s accompanied by three glintstone sorcerers, so clear out the village as much as you can before engaging. Defeat her for 13,000 Runes and a Memory Stone. If you’re not keen on this battle, you can ride past the fight and around the rockface to the left to discover the Primeval Sorcerer Azur site of grace.

From the Primeval Sorcerer Azur site of grace, ride northeast across the makeshift stone bridge across to the other side, past the Gelmir Hero’s Grave minor dungeon entrance. Continue to ride north past some wolves until you come across a wooden siege tower with soldiers milling about. Turn northwest from here and ride out across another makeshift stone bridge. Across the bridge, you’ll encounter a Revenant in your path. Fight it or run past it and climb up the wooden ladder going up the cliff face.

Continue up the series of ladders until you reach the top. Tip: the first landing will have two ladders you can climb. The leftmost ladder path will lead you to a merchant and will ultimately put you above many of the encamped soldiers at the top of the climb. Expect to fight some, though. Once you’ve cleared the soldiers, ride west, across the long wooden bridge (don’t worry. Sekiro players; it won’t collapse). On the far side, rest at the Ninth Mt. Gelmir Campsite site of grace.

From here, you can climb up the ladder or take the Spirit Spring to leap up high onto the mountaintop. At the peak, you will be met with the Full-Grown Falling Star Beast boss fight. If you engage in this fight and win, you will earn 21,000 Runes, 1 Somber Smithing Stone, 5 Smithing Stone [6], and the Fallingstar Beast Jaw weapon.

If you would rather skip this battle for now, you can run to the right side of the boss arena. There, you will find a makeshift stone path jutting out to the west, where it overlaps with another stone path just below, forming a broken bridge of sorts. Take that path down, and you will find yourself on the approach to Volcano Manor – the imposing manor to the south. You’ll still have to fend off some enemies outside, but once inside the manor, you will be safe.

This is an unusual path to Volcano Manor, but it actually takes you to a unique area in Volcano Manor, which you are unable to visit otherwise. If you let Patches live back in Murkwater Cave, he will relocate to the Scenic Isle site of grace in Liurnia of the Lakes. He tells tale of a secret path into Volcano Manor, one which involves being taken by an Abductor Virgin found in the depths of Raya Lucaria Academy. Make sure you’re ok losing your Runes for this route—this method does involve you dying and being transported far away.

In order to reach the correct Abductor Virgin, head to the Schoolhouse Classroom site of grace in Raya Lucaria Academy and head outside where the giant water wheel can be found. You initially traveled up the platforms on this waterwheel in order to reach this location, but traveling down the waterwheel leads to the Abductor Virgin. You should find a thin path alongside the waterwheel at the end of which you’ll encounter a torch-wielding enemy. From here, you want to jump onto the waterwheel platforms heading down into a crystal grove at the base.

You’ll encounter the Abductor Virgin down here. Be careful in this fight; the only way for it to transport you is for you to be grabbed by it and also killed during the grab attack. This particular enemy does seem to perform its signature grab attack much more frequently than other Abductor Virgins, but be careful not to be slain by its other moves.

Once you are grabbed and slain in the same move, you will wake up in the heart of Volcano Manor. This section of Volcano Manor is a wholly unique portion of Volcano Manor you are unable to access by other means, so have fun exploring. After defeating this sub-area’s boss, the path ultimately leads you back into Altus Plateau, just above the Seethewater River site of grace. You can then ride the rest of the way to the main entrance of Volcano Manor if you’d prefer.

There is, however, another path.

This option is the simplest route to Volcano Manor, teleporting you to Volcano Manor pretty much right after gaining access to Altus Plateau. Starting At the Laskyar Ruins site of grace in Liurnia of the Lakes, ride northwest, heading toward the golden telescope icon on the map. When you draw near, you should hear Rya, calling for assistance from the nearby gazebo.

Rya will ask you to aid her; make sure to agree to hear her request. She will explain that he had a special necklace stole from her, and she desperately needs it returned. To get the necklace back, you’ll want to ride northwest to Boilprawn Shack.

There, you will encounter an NPC named Blackguard Big Boggart. He’s the one who stole the necklace. Ask for the necklace back. He will offer to sell it to you for 1,000 Runes. If you accept, he will return the necklace and become a merchant. If you refuse, you can kill him to gain the necklace, but if you do so you will lose access to his questline and its interaction with the Loathsome Dungeater.

Once you’ve acquired the necklace, return to Rya. She will be overjoyed that you returned her necklace. Due to your assistance, she recognizes the quality of your character. She tells you of Lady Tanith and Volcano Manor, and she ultimately offers you a Volcano Manor invitation. Speak with her some more, and she’ll explain the main ways to reach Altus Plateau: The Grand Lift of Dectus and the Ruin-Strewn Precipice. Both paths are worth exploring, but the Grand Lift of Dectus is by far the easier path to unlock and reach Altus Plateau.

Rya will meet you nearby the ends of both of these routes: if you take the Ruin-Strewn Precipice, Rya will be waiting for you by the Erdtree-Gazing Hill site of grace, over by the Lux Ruins nearby. If you take the Grand Lift of Dectus, Rya can be found waiting just ahead after stepping off the lift in Altus Plateau. Whichever route you choose, speak with her, and she will offer to take you to Volcano Manor. When you accept, she will teleport you both to Volcano Manor.