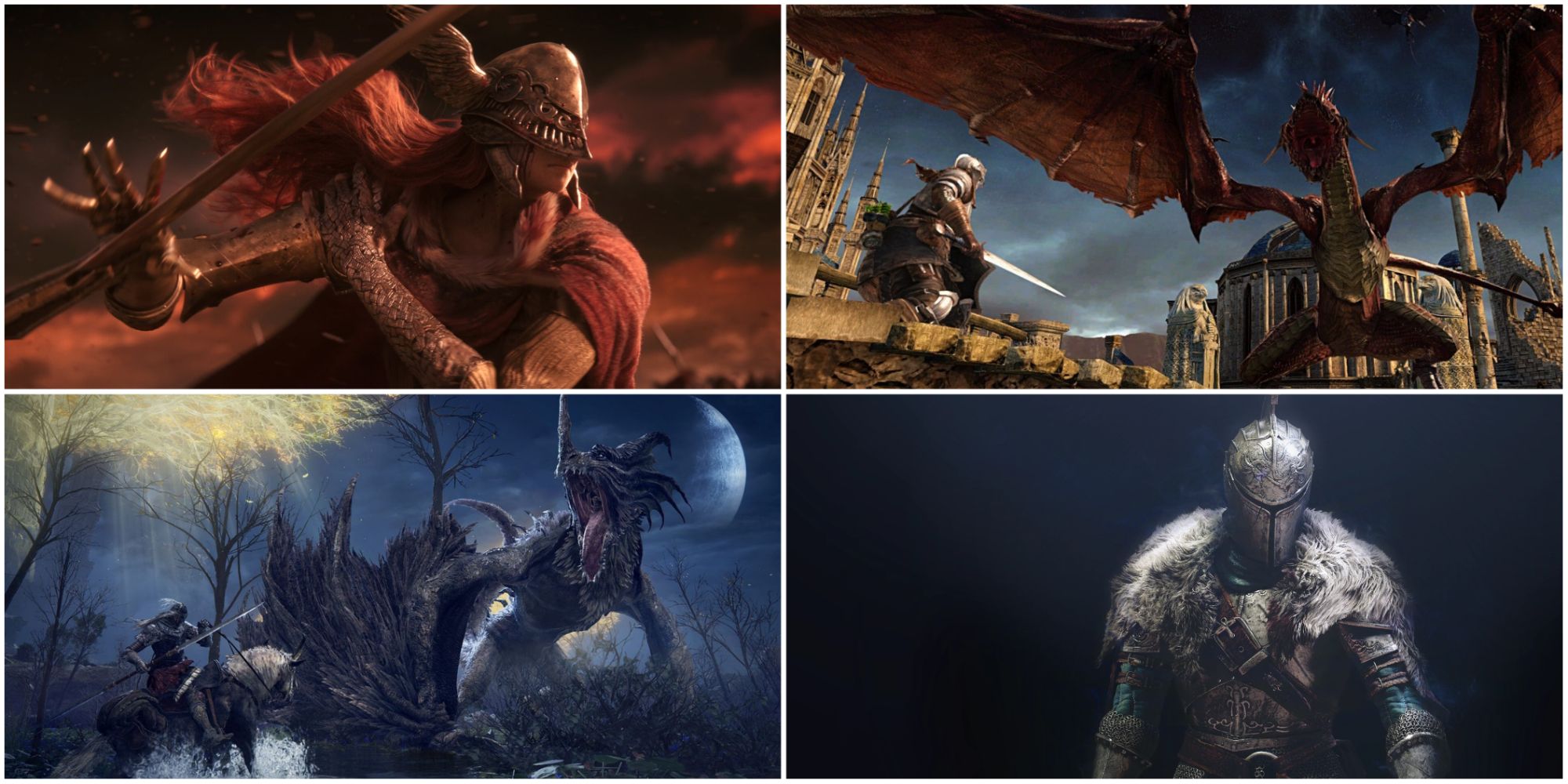 
For the FromSoftware die-hard, there is only one Dark Souls sequel, namely Dark Souls 3. Dark Souls 2 is very much the black sheep and has received more than its fair share of criticism over the years. Even among those who don’t actively despise it, it is largely forgotten.

But I’ve always had a soft spot for Dark Souls 2. It did a lot wrong, but I’ve always maintained that it also did a lot right. There’s a creativity and variety to it that I feel has been almost completely overlooked. For the longest time, I was resigned to Dark Souls’ first sequel being a one-off, a failed experiment, a dead end. That being the case, Elden Ring felt like a massive vindication of my love for Dark Souls 2. At times, it almost feels like its spiritual successor.

Drangleic and The Lands between are both relentlessly unpredictable game worlds. By moving away from the traditional Soulsborne structure, FromSoftware gave themselves far greater scope for the weird and wonderful. Drangleic may not be quite as aesthetically cohesive as Lordran or Lothric, but it has a personality all its own that a more traditional Souls game would struggle to emulate.

Both Elden Ring and Dark Souls 2 eschew intricately connected, almost Metroidvania design in favour of more expansive and varied worlds. One of the reasons I struggle to go back to Dark Souls 3 is how uninspired the visuals are. There are certainly stand-out moments, but for the most part, it just feels like more of what the original game already did. Cathedral after cathedral, a couple of castles, and the odd sewer. There were very few moments that gave me a reason to stop and take in my surroundings.

In Dark Souls 2 you have Earthen Peak, where a windmill sits atop valleys of poison gas, No Man’s Wharf, an abandoned dock where strange, twisted creatures shun the light, and The Dragon Aerie, high above the Earth. They may have had their flaws from a design perspective unfair enemy placement, and awkward points of no return in particular, but there is a variety to the world in Dark Souls 2 that wasn’t recaptured until Elden Ring. Dark Souls 2 captures the sense of adventure I got from Elden Ring better than any other Souls game I’ve played.

Remember stepping out of a cave and seeing Heide’s Tower of Flame for the first time?. The sunlight on the sea and the crumbling ruins inspired a genuine sense of wonder. The rest of the game was no different. The epic drizzle-soaked ascent to Drangleic Castle, the hauntingly beautiful Shrine of Amana, and the imposing decrepitude of the Lost Bastille all made me stop and stare.

The connection between Dark Souls 2 and Elden Ring runs deeper than that though. The way the player is orientated to the world is also a significant point of convergence. Generally in a FromSoftware game there is one obvious way forward, that may branch out later. The Undead Burg, The streets of Yharnham in Bloodborne and so on. The exact reverse is true of both Elden Ring and Dark Souls 2. There are multiple paths to take at the outset, which all converge later. Your typical Soulsborne game is like a tree. You begin by climbing the trunk and are given options on how to proceed nearer the top. Dark Souls 2 is like the same tree but turned upside down.

The best way to think about this is in terms of your objectives. In the original Dark Souls, you are tasked with ringing the two Bells of Awakening, and unless you’re a veteran you will almost certainly ring the one above the Undead Parish, then the one in Quelaag’s Domain. Then it’s off to Sen’s Fortress and Anor Londo, only after which does the game open up into chasing down the four souls required to fill the Lordvessel and open up the Kiln of the First Flame.

In Dark Souls 2 you are almost immediately on the hunt for the four “Great Souls”, belonging to The Lost Sinner, The Rotten, The Duke’s Dear Freja, and The Old Iron King. The order you fight them in is up to you. Once you have all the souls, you can proceed through the Shrine of Winter at which point the game becomes a linear gauntlet through the areas in and around Drangleic Castle.

It may not be a full-on open world in the same way Elden Ring is, but Dark Souls 2 gives players a sense of agency that evokes a similar feeling of freedom. The areas in Dark Souls 2 don’t overlap the way they do in Dark Souls, which for many was a point against the game, but I actually liked the greater breadth at the outset. The world felt vast and expansive, despite not technically being an open world. Elden Ring takes a similar approach, going for a sprawling overworld over the labyrinthine structure of most other FromSoftware games. It can be a little daunting, but there is a certain magic in striking out in whichever direction you see fit in search of adventure.

Neither approach is better than the other (although you wouldn’t think it given the way people talk about Dark Souls 2), but as Elden Ring demonstrates, the second certainly has its strengths. There’s an immediate emphasis on exploration, and the world feels genuinely big. It’s actually very similar to the way The Legend of Zelda: Breath of the Wild is structured, and we all know how that was received. Not being an all-out open-world game, Dark Souls 2 didn’t quite have the same degree of exploratory freedom, but in its own way, it anticipated what was to come with Elden Ring.

Where Dark Souls 1 and 3 didn’t offer many incentives to experiment with new weapons or magic, Dark Souls 2 encouraged you to try out new things more. Power stances (which made a triumphant return in Elden Ring) are a great example of this, whereby dual-wielding weapons of the same class would put you into a “power stance”, unlocking a whole new moveset.

This opened up a whole host of tactical options, and let players run wild with their builds, as the awesome video below by SunlightBlade demonstrates. There’s nothing quite like power-stancing dual greatswords. There’s even a pair of matching great shields that can be used as weapons when in power stance. Elden Ring brought all that back and was better for it. It’s all too easy to find one thing that works and stick with it to the point that it gets boring, but these games gave the player a reason to try something new. Fun, unique mechanics are a great way to do that and Dark Souls 2 is full of them.

RELATED: Elden Ring: How You Should Build The Prophet Class

Letting the player experiment was clearly a key design principle. There are significant changes to NG+ runs, which means you have to keep adapting even in the post-game, and through the use of bonfire ascetics, skilled players can get their hands on rare boss weapons much earlier than they would otherwise. The spirit of Elden Ring’s open-world approach can be felt in the way Dark Souls 2 allows players to bend the world to their will. Don’t feel like rounding up all four great souls? Just kill the rotten four times instead and ignore the others. The Pursuer giving you trouble? Line him up and shoot him with the nearby ballista. There’s even a coffin you can hop into for a quick gender swap if you like.

The Dark Souls 2 DNA runs right through Elden Ring, and we shouldn’t overlook that. Yes, the bosses are a little lacklustre taken as a whole (but there are some great ones), yes, the world connectivity is non-existent, and yes, Soul Memory should never have existed, but there was way more to the game than that. It was a Dark Souls game that was less prescriptive, and more experimental, and in that way it paved the way for FromSoftware’s open-world triumph eight years later.NEXT: Elden Ring Player Realizes Fascinating Historic Detail About The Crucible Knights