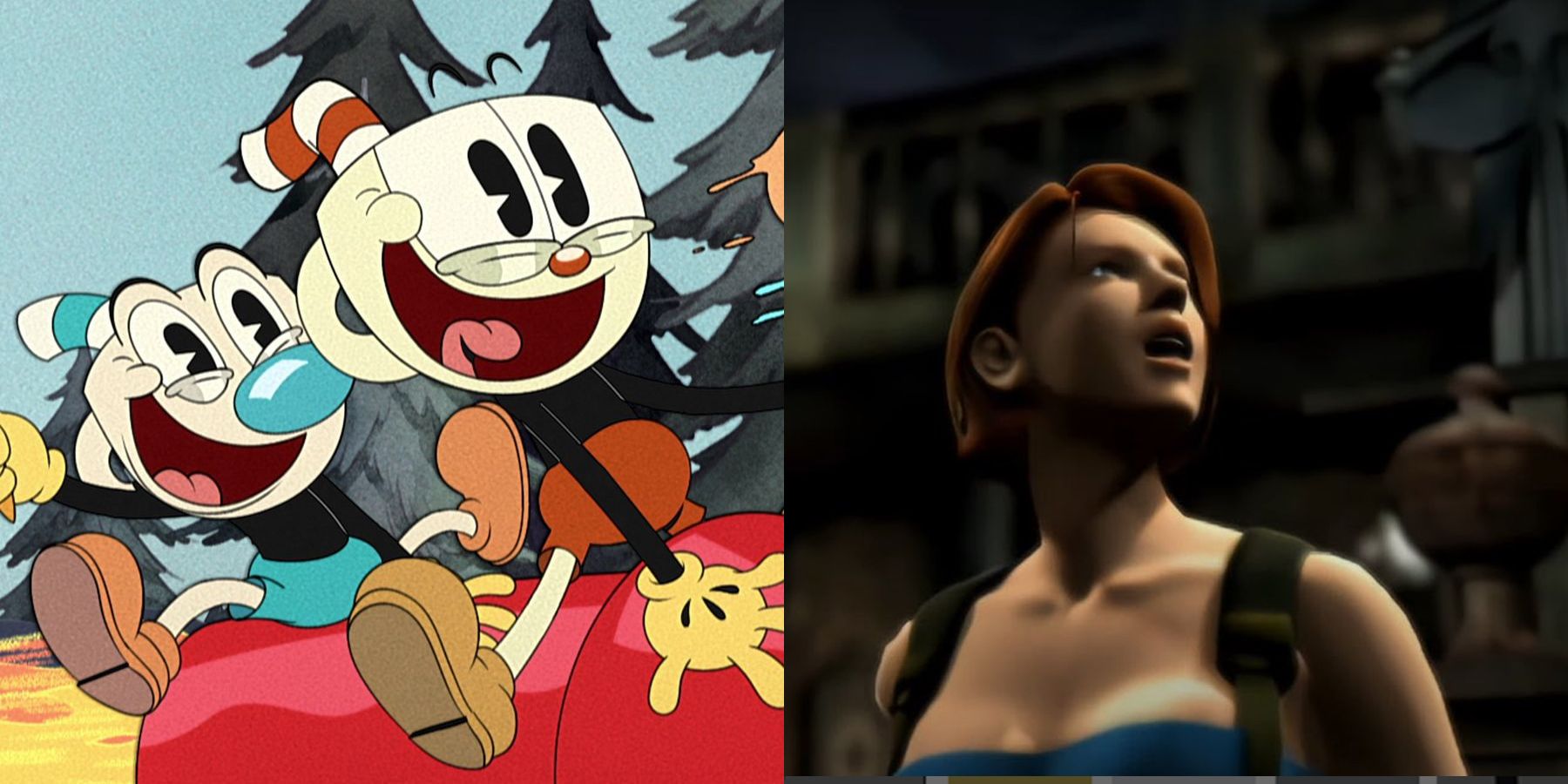 
While most video games offer players an escape from the stresses of day-to-day life, some gaming experiences are designed specifically as heart-pounding spectacles. Some of these video games range from horror titles capable of scaring gamers the moment the game hands control the players to action-packed games with setpieces capable of mimicking cinematic experiences.

Related: MMORPGs Perfect For Newcomers To The Genre

As such, players looking for an equally-compelling experience may want a game to keep them glued to their screens from start to finish. Some of these games include horror tiles with a monster that relentlessly chases the player to action titles with a plot that fits a spy-flick.

Fans of Dark Souls and other Souls-like games would immediately recognize Cuphead for its reputation. Taking place in Inkwell Isle, the cartoonish and Disney-esque Cuphead takes place after brothers Cuphead and Mugman, against the advice of Elder Kettle, lose a bet against the Devil in the Devil’s Casino. In exchange, Cuphead now has to repossess the souls of runaway debtors to pay off their debt. Cuphead – or with Mughead, if playing with another player – has to progress through levels and boss fights until the Devil himself considers a threat, which then triggers the final boss fight.

However, unlike Souls games, Cuphead takes place across a run-and-gun gameplay format. Players have to repeatedly progress through levels across difficulty modes in order to unlock further levels, almost reminiscent of a platformer. Given the game’s 2D nature and ridiculous difficulty, the considerable lack of space makes levels and bosses much harder and more intense, forcing players to be more alert of their movements and actions throughout the game experience.

Compared to other psychological horror games that often have players outlast various monsters, Layers of Fear instead has players exploring a house the entire time. Players take on the role of an artist who just returned to his studio, with the aim of creating his magnum opus. Unfortunately, it’s up to the players to explore his house, solve puzzles, and finally figure out a way to do so. Aside from the increasingly-unsettling mindscape of the artist that the puzzles reveal, Layers of Fear doubles down on the intensity by subtly changing the environment as the players explore.

Instead of having a hidden horror or outright gruesome elements, Layers of Fearutilizes its lack of context and a rather “ordinary” house to slowly frighten the players. The fact that the only real terror in the game is within the artist’s mind, and that players need to slowly uncover it, makes the game begin in an unsettling manner and end in just the same way.

Remedy Entertainment’s Alan Wake was supposed to be an open-world action game to “counter” its more linear Max Payne series. However, the game’s final story would get the narrative approach, taking place across various “episodes” akin to a thriller series. Alan Wake takes the eponymous Alan Wake, a best-selling thriller novelist, to the town of Bright Falls, Washington to discover what truly happened to his missing wife.

Moreover, throughout Alan’s journey, he realizes that things happening to him are things that happened in the plot of his newest novel which he doesn’t remember writing. While this might be survival-horror at first glance, Alan Wake plays more like an action game, with players fighting shadow-like beings called the Taken by first exposing them to light before attacking them. Outside this rather unconventional approach to action, it’s unraveling the game’s rather odd story across its numerous “chapters” that makes Alan Wake an experience to revel from beginning to end.

Despite the unfortunate fate of Telltale Games, it’s The Walking Dead that undoubtedly sparked a revival of narrative-focused titles. Essentially an episodic game, The Walking Dead is a spinoff of the franchise of the same name, where university professor and convicted criminal Lee Everett finds himself protecting the girl Clementine from the Walker threat. Taking place just after the onset of the virus, The Walking Dead takes a different path from the original series.

Related: Great MMORPG Games That Flew Under The Radar At Release (But Still Hold Up Today)

And fans aware of how brutal the show could get is likely aware that the stakes are just as high in the Telltale title. Other usual narrative games, The Walking Dead immediately makes it apparent that choices players make have an impact in the broader story. This is made obvious when players have an active role in determining who lives or dies within their survivor group. The fact that it’s the player’s actions that dictate the fate of the story’s characters not only adds pressure, but ramps up the tension in the fact that no one might actually survive at the end of the game.

While some may say The Last of Us takes a similar route as The Walking Dead with its “old person protects young person” dynamic set in the apocalypse, it’s the entire premise of the game that makes it a deeper experience. In The Last of Us, smuggler Joel is tasked with “delivering” youngster Ellie to scientists in the hopes of finding a cure to the Cordyceps Virus, which has mutated all of its infected into monsters except for Ellie.

Since players know that bringing Ellie to the end of the game would lead to a greater cause, The Last of Usimmediately establishes a unique element of “hope” in its survival horror setting. However, it’s choices that players make in the process that makes progress in The Last of Us rather compelling. After all, Joel and Ellie’s companions may have different intentions with what to do with Ellie, and players figuring out which works out the best in their favor is a continuous element throughout the game’s story.

While Hellblade: Senua’s Sacrifice appears like a typical action-adventure game, its themes and story fall on dark fantasy. Its story is set in the 8th Century, where Pict warrior Senua has to travel through Helheim to save the soul of her dead lover from Hela. The game itself happens on two fronts, one where Senua has to explore her surroundings and use her “Focus” to identify puzzles and clues, and another where Senua has to fight the occasional enemy to progress through a level.

However, what perhaps makes Senua’s Sacrifice worthwhile was its accurate depiction of psychosis. The game’s developers have consulted neuroscientists to give players a faithful depiction to the condition, which in the game refers to as a “curse of Darkness” that the gods have inflicted upon Senua. This adds a whole level of intensity to the game, as this “curse” is reflected in the lack of an HUD, as well as various voices that may or may not guide Senua and even react to her movements.

Set more than a decade after the events of the first Alien film, Alien: Isolation puts players on the role of Amanda Ripley, the daughter of Ellen Ripley, as she ends up stranded in an abandoned space station in the hopes of getting clues about her mother. Unfortunately for Amanda, the space station she discovers not only has a dead crew, but hostile Androids and a Xenomorph wandering about.

Related: Best Free To Play MMOs Of All Time

While Amanda fights a multitude of enemies in the game, it’s the Xenomorph that adds a whole new level of tension in the game. Unlike other survival horror titles where bosses are simply “extremely hard to beat,” the Xenomorph in Isolation cannot be defeated. Players need to use their wits and stay on their toes to ensure they are not being stalked. And it doesn’t help that the game makes smart usage of jump scares to remind players just how fatal the Xenomorph threat could be.

Despite “The Numbers, Mason?! What do they mean?!” being an old meme, its origins within Call of Duty: Black Ops is proof of the Call of Duty franchise’s success in dabbling into the “covert ops” format. Taking place during the height of the Cold War in the 1960s, CIA operative Alex Mason has to relive his memories to find a numbers station before sleeper agents across the United States are activated to wreak havoc in the country.

Despite its rather linear approach to gameplay, its story is what sets Black Opsapart from its contemporaries. Instead of the usual explosion-laden approach of other Call of Duty heroes set in the thick of battle, Black Ops instead takes place across various places that detail Mason’s journey. Aside from the twists and turns inside the story’s own twists and turns, players are put at the edge of their seats trying to figure out just what was going on in Alex’s mission. And aside from clues glaring right in front of their eyes, gamers will eventually be treated to one of gaming’s most shocking plot twists at some point in the story.

Whereas most war strategy games revolve around two sides competing for dominance, This War of Mine tackles the effects of war on a civilian level. Marked as a war survival strategy game, players of This War of Mine will have to handle a group of civilian survivors inside a house in a wartorn city. Lacking combat civilians and possessing only ordinary skills, players need to constantly look out for their survivors in order to last day to day.

Due to the nature of the setting, players spend the day hiding their survivors in the house as they heal them, cook food, and even craft tools. At night, survivors can roam around to scavenge for materials, or even aid other NPCs. Players have to constantly stay on top of their survivors’ status if they want to reach the end of the game, which is a declaration of ceasefire at a random point. This “hope” for a ceasefire throughout grueling survival mechanics make each in-game day in This War of Minemore intense than the last.

Players would remember Resident Evil 3: Nemesis as set during the last few hours of the Raccoon City Outbreak, where STARS member Jill Valentine is seen desperately trying to escape the city during the events of Resident Evil 2. Being the last game set in the traditional Resident Evil formula, players will have Jill navigate pre-rendered backgrounds, facing zombies and various forms of undead with a wide variety of weapons.

Unfortunately for Jill, she is pursued by Nemesis, a bioweapon programmed specifically to eliminate the last of STARS members in Raccoon City. Not only that,Resident Evil 3: Nemesishas the added element of having Nemesis pop out in random parts of Jill’s journey. This adds a new level of horror to players, as one wrong doorway at any point in their playthrough could lead them straight to the bioweapon. Considering that Nemesis could easily kill Jill with one to two hits, players always have to be on their guard when exploring any part of the city.