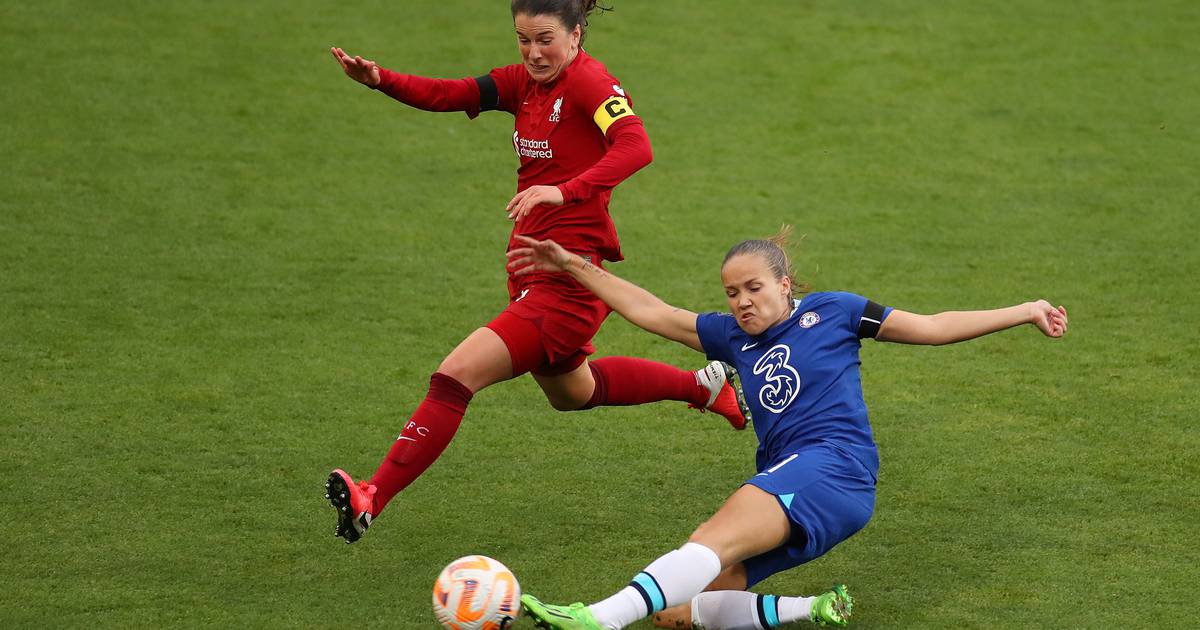 
Sport would wreck your head. It really would. For as long as some of us have inhabited this planet one of the only things we could be sure of was that Liverpool Football Club was the devil’s spawn. And then the 2022-23 women’s Super League came along and you checked to see which club had the most Irish players, thereby determining to which one you would parochially offer your heart and soul for the season ahead. And it was Liverpool. Ah God.

Worse, Liverpool’s three Irish players –- Niamh Fahey, Leanne Kiernan and Megan Campbell – are three humans who are impossible not to love, so when the 3,006 folk at Prenton Park launched into ‘You’ll never walk alone’ as Niamh, Leanne and Megan took to the pitch on Sunday, in Sky’s first Super League game of the season, your heart and soul would have been mangled.

Not least because you feared our Niamh, Leanne and Megan, them only promoted last season. would be pulverised by a team coming off the back of winning three Super Leagues in a row, managed by the legend that is Emma Hayes.

Earlier in the day when the BBC brought us the WSL clash of Aston Villa and Man City – no Irish players involved, so meh – they had a chat with Emma about the season ahead, and the potential positive kick-on from England’s Euro 2022 triumph.

She is, as ever, box office, that woman, the highlight of the piece with her the clip from when she took over as Chelsea gaffer 10 years ago and her telly interviewer had no clue who she was. “Just give us your name,” he said to her at the start, lest the viewers think she was a sheep farmer from Dorset. Any sporting enthusiast who doesn’t know her name by now has evidently relocated to Jupiter.

She insisted that the progress of the women’s game meant more to her than winning trophies, a revelation that had Rachel Brown-Finnis scratching her chin. “I think she likes winning trophies.”

But the point was taken, Hayes reckoned she was one of the few still involved in the women’s game since the days when nobody was watching so its progress thrilled her.

Now, though, is an opportunity to shake things up, she suggested. “I think change has to happen the most when you win,” she said. “If it’s not broken, break it.”

The BBC panel loved that, but you’d half a notion that their gushing over the Villa v City game was the class of thing that was on Hayes’ mind when she talked about wanting to break things, Villa’s 4-3 win a humdinger on the goals front alright, but featuring defending and goalkeeping almost as bad as you’d see in men’s football.

Unending bugbear alert: analysis of women’s football. When it’s crap, say so – go on, go on, go on. You’re not betraying the sisters, you’re actually respecting them and the standards they set for themselves.

But on and on Alex Scott and her BBC panel enthused over what was an entirely mediocre game, like their mission was to convince their viewers that they’d witnessed something they hadn’t.

Sky is better, thanks largely to the work of presenter Caroline Barker and her regular sidekick Karen Carney, the pair a touch more honest in their analysis, if occasionally straying into promotional territory.

Not that we minded them promoting our Niamh, Leanne and Megan – gush away – for whom we feared greatly when Liverpool conceded a penalty with a single minute on the clock. As commentator Gary Taphouse put it: “On no.”

(In time, incidentally, we’ll forgive Gary for referring to the Liverpool captain as Neeve Faw-hee, we were just so happy to see her on our live telly screens, he could have called her Naive Faaa-hay for all we cared).

And then our Leanne limped out of the game, our Megan came on, wrecked Chelsea’s heads with her thrown-ins, Liverpool won 2-1, to which you could only say, “holy smokes”.

“I don’t think we could hit a barn door today,” said Emma in her post-match Sky chat, somewhat hinting at dissatisfaction with her all-star front 10.

A tremendous day for Liverpool Football Club, then. And the pain of being happy for them will never subside.