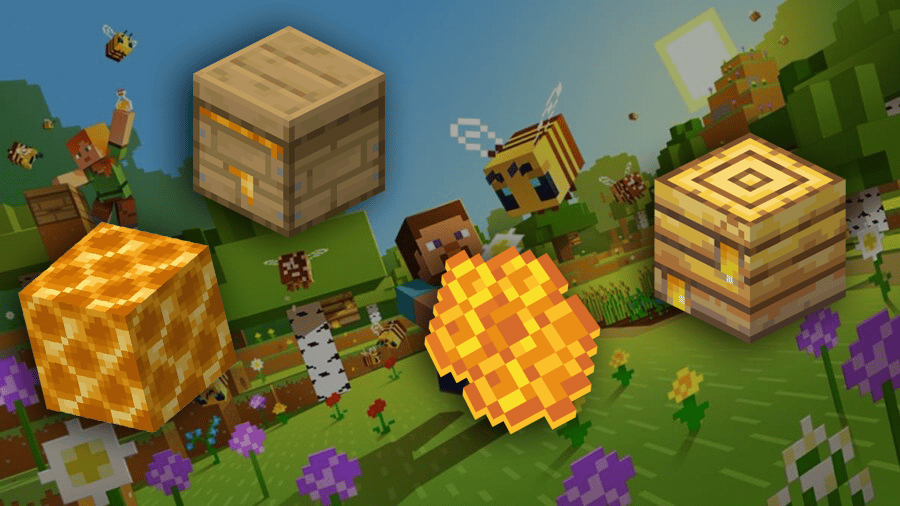 
Bees were added to Minecraft in the Java 1.15 / Bedrock 1.4 update. Since these flying bundles of pollen entered the game, their honey has been highly sought after. Players can use honeycomb to wax seal copper and craft candles. But how do you find bees in Minecraft and get honeycomb?

The easiest way to get honeycomb in Minecraft is to use sheers on a bee nest or hive full of honey. Doing so will drop 3 honeycombs which you can use in various bee-related crafting recipes. However, collecting the honeycomb will aggravate the bees if you don’t place a campfire nearby – turning them into flying hostile mobs.

To start, you’ll need to find a bee nest in the wild.

How to Get Honeycomb From a Bee Nest in Minecraft

Using sheers to get honeycomb sounds simple right? Just like sheering a sheep. However, doing so will cause the bees inside to become hostile – they aren’t so ready to say goodbye to their honey. But don’t fear; there’s a way around having to fight a swarm of bees.

But before you even think about fighting bees, you’ll need to find a bee nest. You’ll find them by exploring the following biomes:

Next, you’ll need to wait for the nest to be full of honey before you collect the honeycomb. You’ll know that the nest is full when it starts dripping honey. At this point, you can use sheers to collect honeycomb or a glass bottle to collect honey.

It’s important to note that without a bee nest, you won’t be able to find honeycomb in survival Minecraft. Exploring your world and finding the above biomes is your best chance to find a bee nest. If you’re starting a new world, try these world seeds to find a bee nest quickly.

Luckily, once you have honeycomb, you can craft a beehive, allowing you to keep bees at home.

Alternatively, you can grow saplings hoping that a bee nest will spawn. To do so, plant a birch or oak sapling within two blocks from a flower. The tree then has a 5% chance of growing with a bee nest attached.

What’s the Difference Between a Bee Nest and a Beehive in Minecraft?

Simply put, a bee nest spawns in the wild, and a beehive is a crafted block. Once you’ve found a wild bee nest, you can use the honeycomb to craft a beehive. At the crafting bench, place three planks in the top row, three honeycombs in the middle and another row of planks at the bottom.

Having a beehive means you can keep bees at home without running to the nearest nest to collect honeycomb. Keeping bees at your base has a couple of benefits:

How to Harvest Honeycomb in Minecraft

Remember us mentioning how bees go hostile when trying to get honeycomb? Well, let’s address that. Bees have attack damage of 2 hearts on easy and normal, and 3 hearts in difficult. Additionally, they have 10 health points. As a result, underestimating bees can be fatal in your early game.

To avoid running from a swarm of bees, you’ll need to calm the bees before harvesting honeycomb. To do so, place a campfire under or within a five-block radius from the nest/hive. Once the bees are docile, you can use your sheers to collect the honeycomb or a glass bottle to collect honey.

However, you’ll need to choose to collect honey or honeycomb from a full hive. Harvesting will cause the hive to empty, and you’ll have to wait for the bees to fill the hive again.

How Long Does it Take to Get Honeycomb in Minecraft?

Getting Honeycomb in Minecraft takes anywhere between 2 – 5 Minecraft days. But how does it work, and when do you know when it’s ready for harvest?

Each time a bee returns to the nest/hive covered in pollen, it will increase the honey by one level. So, 5 levels of honey are needed for the hive to be full. Bees return to the hive at night, and in the morning, they’ll fly out in search of more pollen.

Having more bees in your hive is how you get honeycomb quicker. Beehives and bee nests can house up to three bees at a time.

You’ll know the hive is full when the holes turn a yellow-orange colour. However, this depends on the shader pack you’re using. But generally, there’s a dripping animation that you can look for when the hive is full.

There are various usages for honeycomb in Minecraft, from making candles and coating copper to changing a note block’s instrument. Here are the blocks you can craft using honeycomb:

As mentioned before, you can use honeycomb to craft beehives. Beehives can be used for both practical and aesthetic. Each hive can contain up to three bees and will show a dripping animation when full.

In the 1.17 update, Mojang introduced candles to Minecraft. These new light sources are lit using flint and steel and made from string and honeycomb. You can also add dye to the recipe to change the candle’s colour.

Other than being used as a building block, honeycomb blocks cause the instrument to change when placed under a note block (Bedrock Edition Only).

Lastly, honeycomb can be used to coat any copper block. Regardless of the oxidation phase of the copper, waxing the block will seal it – preventing it from oxidising further.

We hope you’ve answered all your Minecraft honeycomb questions – from getting honeycomb to using it. While it’s not one of Minecraft’s most popular blocks, it has been used more and more since it was introduced.

Its popularity has grown from being used solely to make beehives to now making candles and sealing copper.

What are your thoughts on Minecraft’s honeycomb? Do you use it often, or is it something you’ve never sought? Let us know in the comments below.