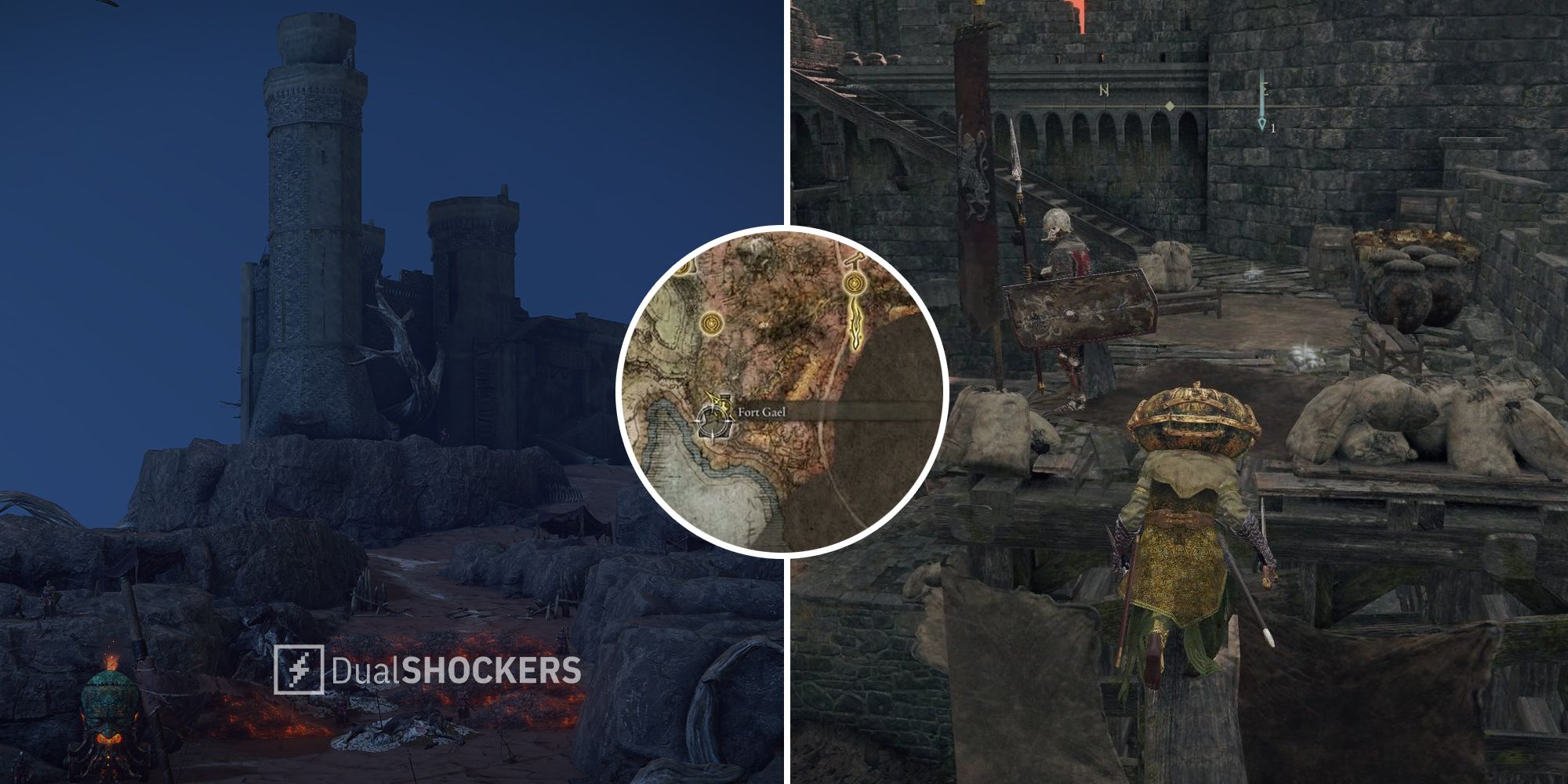 
Elden Ring’s kingdoms are dotted with forts and castles, locations which intrepid Tarnished are meant to brave for the spoils within. One such location, Fort Gael, is located in the heart of Caelid, one of the more unwelcoming kingdoms in the Lands Between.

Fort Gael is more than worth the effort, however, as it is home to some powerful tools. In and around Fort Gael, you can acquire the Flames, Grant Me Strength incantation, Starscourge Heirloom Talisman, and the Katar fist weapon—along with several other powerful tools which any Tarnished would desire.

How To Reach Fort Gael

If you look west from the Smoldering Well site of grace, you’ll spot a fort set against the backdrop of a Minor Erdtree. That is your destination.

Pick your way over the roots and Scarlet Rot growth until you reach the fort’s outer defenses. North of the fort, just to the right of the main entrance where you’ll spot a Flaming Chariot, you’ll discover the Fort Gael North site of grace.

Just to the north of this site of grace, you’ll spot the glowing footprints of an invisible Teardrop Scarab racing around the landscape. Plant yourself in its path and strike it down as it passes. This Teardrop Scarab will drop the Ash of War: Flame of the Redmanes, a staggering Ash of War that makes for an extremely powerful build.

You’ll need to battle through large clusters of Radahn Soldiers, regular soldiers, and the occasional Flame Chariot. As you make your way up the fortified path, you’ll be bombarded with a magical volley of purple arrows raining down from the sky. A long magical archer is the source of these, located up on a high outcropping at the base level of the fort itself. You can fairly easily avoid his rain of arrows, but they can become a deadly distraction as you battle with Radahn’s forces on the ground.

If you’re wanting to eliminate that threat early, mount Torrent and ride up to meet the archer in close combat. This enemy has a chance to drop the Greatbow weapon upon defeat.

On the ride up toward the archer, a small encampment on the right will have a corpse with an item on it. Loot it to acquire five Explosive Greatbolts.

After riding up and defeating the magical archer, continue around the left side of the keep. Once you reach the rear of the keep, you’ll come across two Flame Chariot enemies sitting against the wall. Between them, you can loot the powerful incantation, Flame, Grant Me Strength. After approaching the central pile of burning bodies, several will rise from the pile and try to explode on you (you can loot six smoldering butterflies off of the corpse on the fire). This battle can prove extremely challenging, so if you’re having trouble acquiring the incantation, you’ll be able to approach the incantation from a different angle shortly.

Return to the front entrance to the fort. You’ll notice that the main gate is sealed shut, preventing you from entering. Continue to the right of the main gate and around the corner. There, you’ll spy a large root curling around the side of the keep. This will be your route. Drop onto the root and follow the path along its branches, until you reach the ladder going up (and a spear-wielding soldier guarding said ladder).

Before heading up, you can continue around the side, ending up on a rocky outcropping above one of those earlier Flame Chariots. This can offer you another angle from which to approach this encounter and potentially grab the Flame, Grant Me Strength incantation before the Flame Chariots even notice you.

Once you’re ready to enter the keep, return to the ladder and climb up to the rampart above. When you reach the top, you’ll spot a Lion Guardian pacing the inner courtyard below. Before you engage with the Lion Guardian, you’ll want to clear the rest of the enemies on this upper level and grab any loot.

Head across the thin bean straight ahead, back stab the spear-and-shield-wielding soldier and loot the two Warming Stones from the end of the next beam.

After that, head up the next staircase to the platform above. You’ll encounter two soldiers with spears and shields. Defeat them before a knight arrives from the next tower at the back of this landing.

Once these enemies are cleared, loot the chest in the corner of the landing. Inside, you’ll discover the Starscourge Heirloom Talisman, which grants +5 Strength when equipped. This can be invaluable for meeting specific weapon requirements or simply increasing your attack power (if you’re using a corresponding Strength weapon).

The tower at the far corner is important, but you don’t need it right now. At the top of the tower, you’ll find a teleporter that will transport you all the way to Redmane Castle, where you can ultimately battle Starscourge Radahn himself. For now, though, you’ll still want to complete your looting of Fort Gael.

Head back to the top of the stairs, looking down into the courtyard with the pacing Lion Guardian. Strike at the railings to break them, allowing you an easy run-and-jump to the platform below and across the way. Once you reach the other side, follow the stairs down, along the outside of the fort, to reach a corpse with ten Mushrooms on him. Follow the path back along the rampart until you reach a flaming brazier. Right next to it, blending into the stone is a lever. Pull it to unlock the main gate to the fort.

You’re ready to drop down to the courtyard below, but before you do, aim to land on the platform just below the staircase—you’ll spot a burning brazier down there. If you miss the platform, you can always return later, after battling the Lion Guardian. From this platform, head through the archway and into the dark room beyond. Inside, you’ll discover a chest containing the Katar fist weapon.

It’s time to battle the beast. Guardian Lions aren’t the most difficult creature you’ll battle in Elden Ring, but their quick and acrobatic movements can catch even the wariest Tarnished off guard. If you’re a ranged build, you could pepper the Lion Guardian with arrows or spells from the safety of this platform while sending your Spirit Ash to battle it in melee.

If you’re not a ranged character, your best bet will be to mix it up in melee yourself. Be wary of the Lion Guardian’s high leaping attacks. When you dodge, always try to end up at the creature’s side — this can help you avoid some of its follow-up moves.

A few key attacks to watch for:

This move is a good move to counterattack. The Lion Guardian will reach its left paw backward, then swipe across at you. It will then follow up with a big slash with its right paw blade, leaping around you in a kind of semicircle. If you dodge into the initial attack so that you end up along the Lion Guardian’s side, you will not be hit by the right paw blade attack, so you’re free to repeatedly attack while the Lion Guardian swipes and leaps since the movement keeps it more or less right beside you.

The Lion Guardian Rears its head back a bit, its left paw lifting off the ground. It will then bite forward, then quickly swipe its head from right to left and then left to right with follow-up bite attacks. This move can be difficult to avoid due to the quick attacks. You’ll want to dodge to the right, then left, then right in order to avoid each attack. Once this three-hit combo completes, the Lion Guardian will be vulnerable before transitioning into its next move.

The Lion Guardian rears back on its two hind legs, holds the position, then slams down with its sword. This attack is easily avoided and offers you your best opportunity for counterattack. When you see the Lion Guardian rear up, simply side-step around its right side (to your left). Since this attack doesn’t track you at all, the Lion Guardian will attack in the direction which it was initially facing when beginning the attack. Due to the long reset after the attack completes, you have a massive window during which to attack.

This attack is similar to the previous one. The Lion Guardian leaps high into the air, its paw blade high in the air hangs for a bit, then slams into the ground. This attack does have an element of tracking to it, so you’ll want to time your dodge right as the Lion Guardian crashes down. If you do, you’ll have the opportunity to attack a few times before the Lion Guardian leaps away again. Be careful, though: If you end up directly behind the Lion Guardian, it will drag its blade around itself and spin-attack you before leaping away. If you notice sparks, that’s the time to dodge.

Upon defeat, the Lion Guardian will drop 3,079 Runes and the stylish Ash of War: Lion’s Claw. In front of the now opened gate, you can loot a corpse to acquire a useful Rune Arc.

Now that you’ve completed the fort, you can return to the teleporter in the highest tower to journey to Redmane Castle—if you’re ready to face such a challenge as Starscourge Radahn himself.

NEXT: Elden Ring: How To Beat Starscourge Radahn