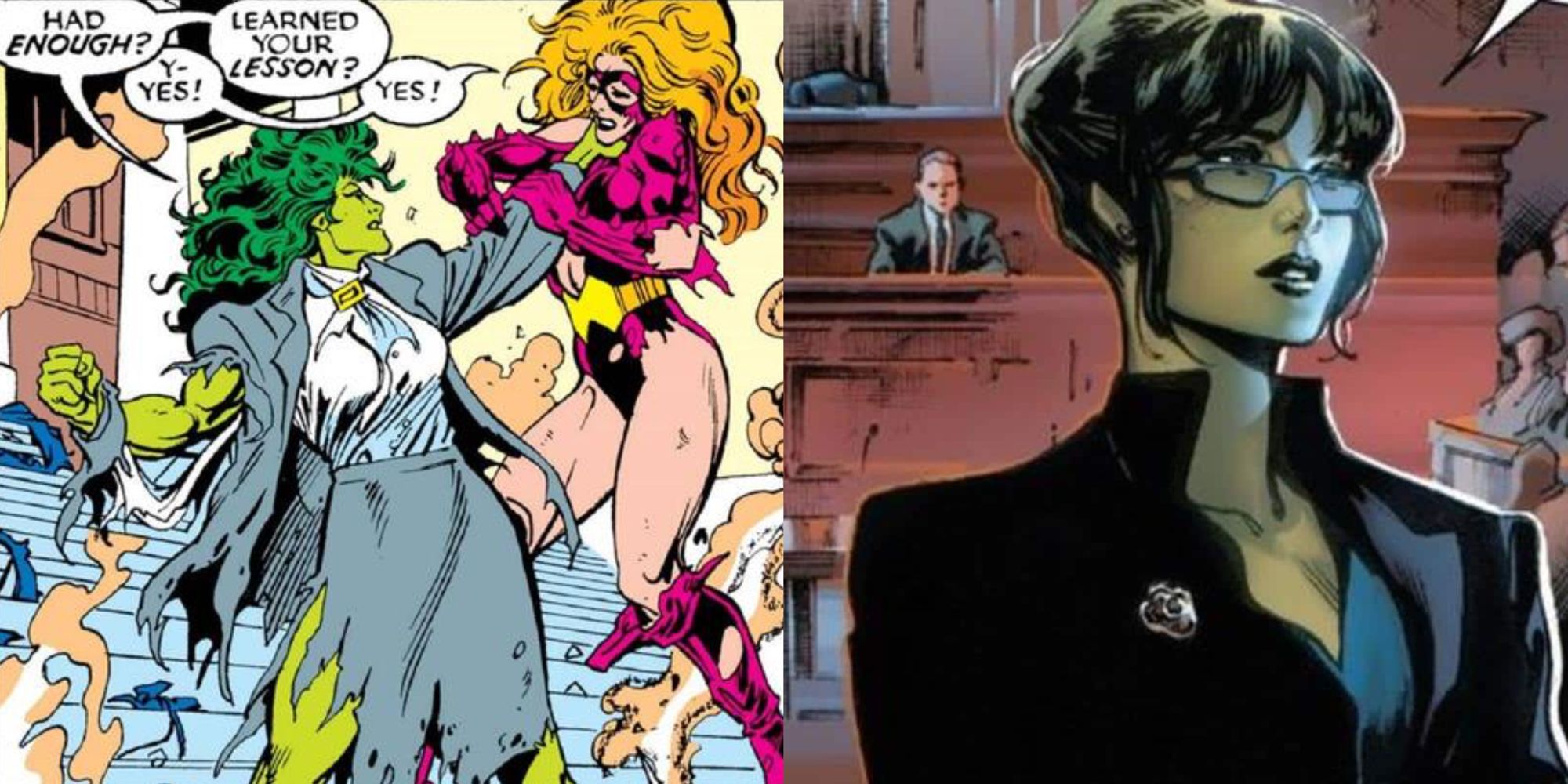 
Jennifer Walters recently successfully secured parole for Emil Blonsky aka The Abomination in an episode of She-Hulk: Attorney at Law. As the newly appointed head representative of the latest Superhuman Law Division at the GLK&H firm, Ms. Walters will be dealing with a slew of clients that will be ranging from superhuman beings themselves to those affected by them.

And her first case on the series proves that she will even be taking cases that she may not otherwise wish to represent. In the comics the show is based on, She-Hulk took on a few villains as her clients and or prosecuted against in court.

After being apprehended in Canada by Alpha Force, Cain Marko a.k.a. The Juggernaut is put on trial and his half-brother Charles Xavier hires She-Hulk to defend him. Though reluctant to defend a notorious supervillain, Jennifer takes the case and heads for Canada.

Throughout the trial, Cain begins to show another kinder side to him that surprises his lawyer and leads to the two developing an understanding. These developments would eventually help the Juggernaut to reform his image and become more of an antihero as well as become a romantic interest for She-Hulk.

One of the lesser-known villains in Marvel canon, The Jester is more like a cheap knockoff of The Flash’s rogue, The Trickster. During the events of the Civil War II saga, the hapless Jester found himself being tricked by a Federal agent to reveal that they missed their days as a criminal thus earning him a stint in prison.

She-Hulk thankfully came to his defense on the grounds that Jester was wrongfully convicted of his “crimes” that he hadn’t actually committed. Jennifer remains a bastion of justice and proves that no one should be locked behind bars for the thought of committing a crime without actually acting upon it.

Most visa applications for entry into the U.S. when you’re the child of a foreign leader shouldn’t be hard to receive, though that’s different if you happen to be the son of Latverian dictator Doctor Doom. Kristoff Vernard is the adopted son of Victor von Doom, making him an occasional enemy for The Fantastic Four, or sometimes ally to them when he wishes to spite his father.

In the third issue of She-Hulk, Jennifer Walters is the only lawyer willing enough to take Kristoff on as a client and face Doom’s wrath head-on. She manages to successfully secure political asylum for Kristoff, but unfortunately the rule of a circuit court does not comply with Doom when he barges in and takes back his son.

Easily She-Hulk;s most formidable foe and fiercest rival in terms of strength, Titania has been a thorn in Jennifer Walters for far too long. Desperate to prove herself stronger than She-Hulk, TItania has made numerous attempts in hopes of just pummeling the giant lawyer.

Unfortunately for her in one instance, she interrupted Walter’s first case before the U.S. Supreme Court. Disturbing what was easily the biggest case of her career made She-Hulk considerably angry. Titania made a big mistake in angering a hulk and faced the consequences as she was tossed around by She-Hulk like a rag doll throughout the halls and steps of the Supreme Court Building.

In the comics, Starfox, or rather Eros is, by all means, a superhero, but he does display less than heroic behavior due to the nature of his power. By no means is he comparable to his genocidal brother Thanos, on a scale of how evil they’re but because of his ability to influence others’ emotions he has been known to use it scandalously.

She-Hulk finds herself defending the galactic hero when sexual assault claims are brought against him. Throughout the trial, Starfox is forced to be imprisoned due to the possibility that he may use his powers to sway the jury. Jennifer finds herself questioning whether Eros is truly innocent. In what appears to be a sign of guilt he attempts to escape only for Jennifer to transform into She-Hulk and beat him up until his father transports him away, leaving the trial in disarray.

Former Russian Mafioso turned Spider-Man foe, Aleksei Sytsevich is the epitome of an “all brawn no brains” villain. In an experiment to enhance one’s strength, Aleksei found himself bonded to a suit of honor made to look like a Rhino, hence the moniker. Though he mostly clashes with the friendly neighborhood Spider-Man, The Rhino has also battled against other Marvel heroes including SHe-Hulk in one hilarious incident.

In a Marvel One-Shot, Rhino found himself being chased by She-Hulk while he was in the midst of robbing the Museum of Natural History. Comically the chase finally ends when She-Hulk manages to subdue the extant species-based thug and promptly hands him a cease and desist order to immediately stop reproducing and selling cheap Avengers merchandise.

Surge is a real deep cut if there ever was one, considering the intergalactic bounty hunter only appeared in one issue of a comic book ever. In one of She-Hulk’s more bizarre comic tales, she takes up the case of an FBI informant named Woziah who is set to testify against the crime lord Kingpin himself.

Woziah is soon targeted by a bounty from Dragon Man who in turn is being pursued by Surge. She-Hulk manages to defeat Dragon Man with ease before Surge attempts to kill him and take his body as a trophy. This earns the Hulk’s ire to soundly beat up the bounty hunter and send him backing. Funnily enough, it’s revealed that Surge hired “Woziah” in an elaborate scheme to get She-Hulk to notice them romantically.

The comics’ industry sure loves to reinterpret or create gods of their own volition. Mephisto, Marvel’s Satan incarnate is no exception. As Satan, Mephisto enjoys cutting deals in exchange for souls and in one instance he managed to tangle Jennifer Walters into a contractual obligation. Depressed over how much she owes to the IRS during tax season, Jennifer unwittingly invites Mephisto while complaining that “she’d make a deal with the Devil himself.”

Taking this literally, Mephisto appears and conjures up a contract that she signs where he will help her garner over a million dollars to help with her taxes but in return, she has to give up the licensing rights to She-Hulk. It’s a bizarre tale and sees Jennifer utilizing her law degree to find any loopholes in the Devil’s Contract and having to resort creatively to evade having her soul taken away.

Next: 10 Most Powerful Marvel Characters That She-Hulk Has Beaten In A Fight