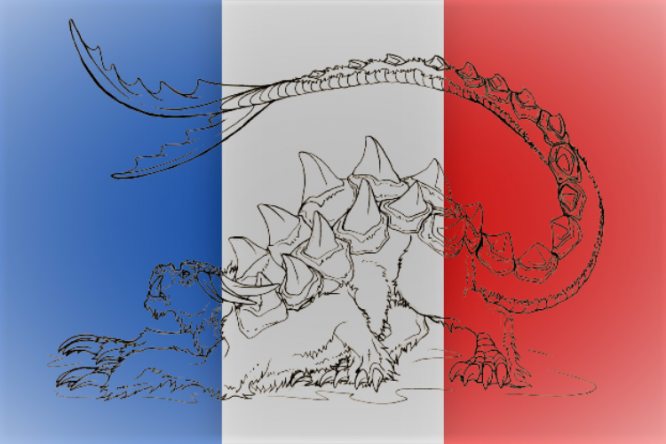 
This is the third part of a five-part series. In the next installations we will look at legends from the west and centre of France.

You can read part one of the series here: French legends part 1: Beasts and beauty – stories from the north

And part two of the series here: French legends part two: Giants and ghosts – stories from the east

The tooth of Saint Apollonia

Every month an unusual event takes place at a village church in Ariège with parents bringing their teething babies to have their gums brushed with a tooth said to be from Apollonia, the patron saint of dentists.

The act is supposed to take away the babies’ toothache (we note the relic is disinfected after each use).

Apollonia lived in Alexandria in the third century and was a very pious woman, devoted to the Virgin Mary. It is said that she was badly beaten by pagans when she refused to insult Jesus Christ. They broke her jaw and her teeth were scattered. She managed to escape and threw herself into a fire.

Several hundred years later in the 11th century, Roger II, count of Foix was apparently offered one of Apollonia’s teeth by the Emperor of Constantinople. He took it back to France with him and gifted it to the Saint Jean-Baptiste church in Lézat-sur-Lèze where it remains today.

The mairie of Lézat-sur-Lèze has details of participating in a toothache healing ceremony on its website here.

There are many mediaeval bridges in France bearing the name ‘Devil’s Bridge’, including three in the department of Hérault.

One of them lies around four kilometres north-west of the village of Aniane.

Legend says that long ago priests from the Abbaye de Gellone and the Abbaye d’Aniane kept trying to build a bridge over the river Hérault but that every night the devil destroyed their efforts.

Finally, a pact was made with the devil. The abbeys would give the devil the soul of the first creature who crossed the bridge, if the devil agreed to allow the bridge to be constructed and make it indestructible.

The devil agreed and was imagining how he would torment the person who would be first over the bridge.

However, once the bridge was built, a poor dog with a pan tied to its tail was first.

This insult enraged the devil and he tried to destroy the bridge, but of course he could not as it was indestructible. In a fit of rage, the devil threw himself in the river in a place called the Black Abyss (Gouffre noir).

The bridge has been listed by the French Ministry of Culture as a monument historique since 1935 and is also listed as a Unesco World Heritage Site.

Like all mediaeval bridges, and especially the (many) Devil’s Bridges, there is a legend associated with their construction. Often very similar to each other, they are nonetheless an integral part of our history and customs

Each year in June a festival called the Fêtes de la Tarasque takes place in Tarascon (Bouches-du-Rhône). There, locals and tourists alike celebrate the legend of the Tarasque, a hybrid creature that is part animal, part fish – a kind of six-legged dragon with a turtle shell and a scale tail with a scorpion’s sting at the end.

The festival was added to Unesco’s list of Intangible Cultural Heritage in 2008.

The Tarasque was said to have been a creature that terrorised the local area until a holy woman named Marthe tamed it and led it back to the town on a lead.

This event is part of today’s festival with the procession de Sainte-Marthe.

In the church square in Fontaine-de-Vaucluse (Vaucluse) stands a fountain-sculpture representing Saint-Véran striking down a monster.

This monster is the Coulobre, a giant, winged salamander that is said to have lived under a rock in the river Sorgue.

Legend has it that the creature once terrorised the local area, attacking men and livestock and slitting their throats.

But in the sixth century, Saint Véran, a bishop from the nearby town of Cavaillon, confronted the beast and killed it – but who knows whether it still lurks in the river, biding its time.

On the island of Corsica, above the village of Murzo in the south, is a curiously shaped mountain peak in the shape of a woman’s head, seemingly gazing towards something in the distance.

It is called la Sposata.

Legend has it that a mother and daughter one lived in the area. They were extremely poor but the mother did everything she could to raise her daughter as well as possible.

She doted on her but that love was not returned and the daughter never showed affection for her loving mother.

One day, the daughter, who was very beautiful, caught the attention of a young lord, the seigneur de la Cinarca.

This young lord eventually proposed to the daughter and they were to be married. The daughter, still showing no love for her mother, set off with the lord to their new home in Cinarca.

The daughter was happy but was also ashamed of her poverty and that she had so little to take with her on her journey to her new home.

So, before she set off, she decided to take all the worldly possessions that her mother owned. This was not much but it left the mother with nothing.

The daughter and the young lord left with a big procession, encumbered with the possessions of the mother, who, despite the meanness of her daughter, could not help but feel pride and love for her.

A short while after setting off the daughter suddenly realised that she had missed one object – a dough scraper. She could not accept leaving this behind and so demanded that someone be sent back to fetch it. The young lord was bemused but complied and sent back a servant to fetch it.

The mother, still standing at the door of her now empty house, watched as the servant broke off from the procession and began heading back towards her.

She was suddenly filled with hope, thinking that perhaps her daughter had realised her cruelness and had sent the servant to apologise or to at least offer a nice word.

But no, the servant returned and demanded the dough scraper.

Finally, the mother snapped and all the love she had for her daughter drained away. It was the final straw. Screaming into the sky, she cursed her daughter, crying, “you will be punished, oh daughter of stone”.

Her cry must have been heard because suddenly a heavy mist descended on the procession. When it finally cleared, the young, ungrateful daughter had been turned into stone.

She now sits atop the mountain, staring out towards Cinarca, her heart as hard as stone.

The above map and article is also part of our ongoing series showcasing different elements of French society and culture.

We have also written about French inventors, cheeses, funny commune names, local sweets and desserts, local aperitifs and many other topics.

If you have any suggestions for maps you would like us to make or think we should add anything to our previous articles, let us know at news@connexionfrance.com.

Urban myth or true: Is it illegal to call a pig Napoleon in France?

Truth or myth?: Napoleon and the story of the truncated pyramid cheese